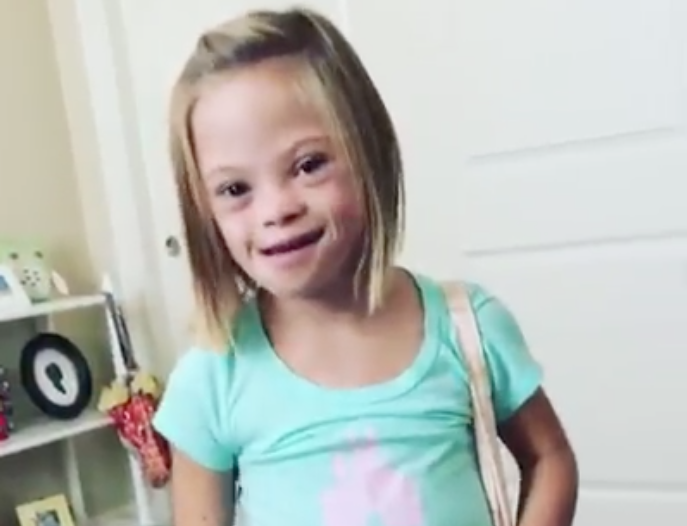 Every year during Down Syndrome Awareness Month, Jennifer Sanchez tries to reach out to her friends and family about Down syndrome.

The mom wanted to speak on behalf of her two children – her 8-year-old son, Joaquin, and 7-year-old daughter, Sofia – who have the genetic disorder.

But this year, she decided to let her daughter speak for herself.

One day, while laying on her daughter’s bed with a cellphone in hand, Sanchez spotted the perfect opportunity to ask Sofia about Down syndrome.

“Little miss, do you have Down syndrome?” Sanchez asked.

“Yes, I do have Down syndrome,” Sofia stated matter-of-factly.

Sanchez continued, asking Sofia what Down syndrome is. Sofia explained that it’s in your “blood.”

“Down syndrome is in your blood? Does it make your blood special?” Sanchez responded.

“Is Down syndrome scary?” Sanchez then asked.

“No, it’s not scary; it’s so exciting!” Sofia said, while motioning with her hands.

The mother of four from Rocklin, California, couldn’t stop smiling as she listened to her daughter’s cute responses.

She wanted to share a little joy with her friends, so she posted a video of the minute-long conversation on her Facebook page. And to her surprise, the video went viral with more than 5 million views.

Sanchez’s inbox has been flooded with messages.

“I’ve read message after message saying, ‘It’s so inspiring to hear about someone who loves themselves so much,’” Sanchez told CBS News. “I realized that I don’t think people hear enough from people with the disability describe just how great they feel about themselves.”

Most moms say their children are special, but Sanchez says Sofia is really special.

After Joaquin, her third son, was born with Down syndrome, Sanchez said her family was inspired to help other children like him. During Christmas, they donated to the Reece’s Rainbow Down Syndrome Adoption Grant Foundation, an organization that helps find families for orphans with Down syndrome and other special needs by raising funds for adoption grants.

That year, the Sanchez family sponsored a little girl. But after seeing her picture, somehow, she just couldn’t get the image out of her mind.

“Why don’t we just adopt her?” Sanchez thought, while talking it out with her husband.

Her husband agreed – the little girl needed to be a part of their family.

When she was 16 months old, the family picked up the child from an orphanage in Ukraine, and the rest is history.

“I can’t imagine my life without her,” said Sanchez, gushing over her little girl.

Sofia is a bundle of energy.

She loves to act, dance, play soccer and do other things girls her age love to do.

But she also likes to speak up for “her people,” Sanchez said.

Sure, she experiences a range of emotion – sometimes she’s sad, angry, stubborn, competitive – but at the end of the day she “loves her life and she loves herself,” Sanchez said.