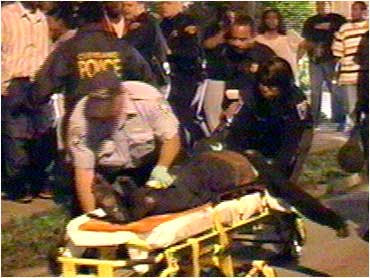 A fire broke out during a sleepover at a Cleveland house early Saturday, killing seven children and two adults, the fire department said.

Eleven people were in the house in the eastern part of the city when the blaze started around 3 a.m., said Assistant Fire Chief Tim O'Toole. O'Toole said at least one of the children was at the house for a sleepover. The victims were ages 4 to 34.

Firefighters said the mother of six of the dead children lived in the house, but it was unclear how the others were related.

One of the house's occupants was being treated at a hospital in the late morning, but the extent of the injuries wasn't known, O'Toole said. Another survivor didn't require hospital treatment.

An investigation into the fire's cause centered on the house's first floor, which sustained heavy fire damage, O'Toole said. The second floor, where all the bodies were found, was heavily damaged by smoke and soot, he said.

"It obviously had a large volume of fire; it's certainly severely fire damaged," he said.

Much of the house's white wooden frame was charred jet black and the roof over the front porch was partially collapsed. Every visible window had been knocked out by firefighters or shattered in the fire.

As daylight broke, dozens of neighbors, family and friends gathered near the scene, hugging and crying as they surveyed the obvious damage to the 99-year-old home. A smell of soot hung in the air, and firefighters shoveled debris onto a small fenced front yard. The house's barred security door hung by one hinge.

Richard Carter told WKYC-TV that he lost his daughter and several grandchildren in the blaze.

"I just want somebody to pray for me and my family," he said through tears as he trembled in the chilly spring air.

According to Cuyahoga County auditor's office documents, the 1712-square-foot house had four-bedrooms.

Neighbors said the mother was well-known on the street in the working class neighborhood about 3 miles from downtown where many of the older homes are rented to lower-income families. Many of the houses have been refurbished, but a few are boarded up.