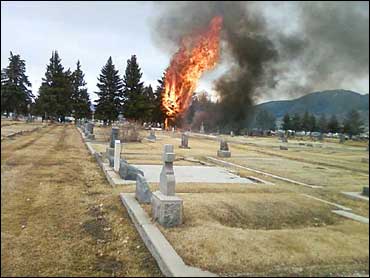 A small plane - possibly carrying children on a ski trip - crashed Sunday as it approached the Butte airport, killing 14 people aboard, a federal official said. The single engine turboprop nose-dived into a cemetery 500 feet from its destination.

The number of the dead was confirmed Sunday night by Karen Byrd, a Federal Aviation Administration operations officer in Renton, Washington.

She said the death toll was seven adults and seven children. The number of dead originally had been put as high as 17.

"At first I thought it was a stunt plan," 14-year-old Kenny Gulick, a witness, told CBS' The Early Show Monday. "All of the sudden it went into a nosedive."

An investigator with the National Transportation Safety Board offered few details at a press conference in Butte Sunday night. No cause of the crash was given.

"We are just beginning our investigation," said Kristi Dunks. "We don't have a lot of information at this time.

Locally-based investigators already on the scene said the recovery process has not started late Sunday night, and they were putting tarps over the wreckage.

Officials were working to determine whether the aircraft had flight data recorders (black boxes) onboard, but there were early indications that it did not.

"Certain family members were contacted," Dunks said. "At this point, I don't have an exact number."

A California newspaper, the Napa Valley Register, reported on its Web site late Sunday that a family of five from St. Helena, Calif., including three preschoolers, was among the victims.

Dunks would not say if there had been a distress call from the pilot. It was partly cloudy, the visibility was 10 miles and winds were blowing from the northwest around 10 mph at the time of the crash, according to hourly temperature information from the National Weather Service.

The aircraft had departed from Oroville, Calif., and the pilot had filed a flight plan showing a destination of Bozeman, about 85 miles southeast of Butte. But the pilot canceled his flight plan at some point and headed for Butte, Fergus said.

Preliminary reports indicate the dead include numerous children, he said.

"We think that it was probably a ski trip for the kids," Fergus said.

A mechanic at the Oroville airport said late Sunday that he had seen the plane earlier in the day.

Tom Hagler, owner of Table Mountain Aviation, described the children as ranging from about 6- to 10 year olds. He let the children into his building to use the restroom.

"There were a lot of kids in the group," he said. "A lot of really cute kids."

Hagler said he showed the pilot where he could fuel his plane, and the pilot said he expected his flight to take two-and-a-half hours. The pilot didn't file a flight plan at the Oroville airport.

Butte Silver-Bow Sheriff John Walsh said there were a few people at the cemetery at the time of the crash, but no one on the ground was injured. He would not describe witness reports.

Steve Guidoni of Butte said he was driving by the cemetery and saw the plane nosedive into the ground. He stopped and ran over to see if he could help.

"It smelled like diesel fuel to me," said Guidoni, 61. "There was nothing left of it. It just went straight into the ground. I went over there to try to help. I thought maybe I would pull someone out of the fire."

Guidoni said he saw luggage and seat cushions lying around, but no bodies. He said the biggest piece of the plane was the size of a kitchen table.

"You wouldn't even know a plane was there," he said.

Nick Dipasquale, 19, was working at a gas station across the street.

"I heard a loud bang," he said. "It sounded like someone ran into the building."

He said he ran outside to see flames as tall as the trees.

Dipasquale said people who were fueling their cars said they saw the plane flying low, begin a turn, start to wobble and then slam into the ground.

Fergus said the Pilatus PC-12 aircraft was manufactured in 2001. Such planes are certified to carry 12 people.

Cordes reports the plane's airworthiness certificate was current, according to FAA officials.

According to figures from AvData Inc., there were 570 of the PC-12 aircraft registered in the U.S. and Canada as of early 2008. Having flown 1,389,139 hours, according to the manufacturer, there were 12 accidents recorded, three of them involving fatalities.

The plane was registered to Eagle Cap Leasing Inc. in Enterprise, Oregon, Fergus said. He didn't know who was operating the plane.

I. Felkamp is listed in Oregon corporate records as Eagle Cap's president. Attempts to reach him by phone were unsuccessful.

The flight originated at Brown Field Municipal airport in San Diego on Saturday evening and flew to Redlands, Calif., about 100 miles north, said Rachel Laing, a spokeswoman for the city of San Diego.

The plane left Sunday morning for Vacaville, Calif., according to Flight Aware. From there it flew to Oroville, Calif., and then to Butte. The NTSB could not confirm that information.

"We are still gathering the information of the aircraft, it's purpose, what they were doing and where they were going," Dunks said.

The crash is the fourth major plane accident in the U.S. in slightly more than three months.

On Dec. 20, Continental Airlines plane veered off a runway and slid into a snowy field at Denver International Airport, injuring 37 people. No one was killed. In January, a US Airways jetliner landed in New York's Hudson River after a flock of geese disabled both its engines. All 155 people onboard survived. Last month, commuter plane fell on a house in a suburb of Buffalo, New York, killing all 49 passengers and a man in the home.

Before the Buffalo crash there hadn't been an accident involving a commercial airliner in the U.S. in which there were fatalities in more than two years.