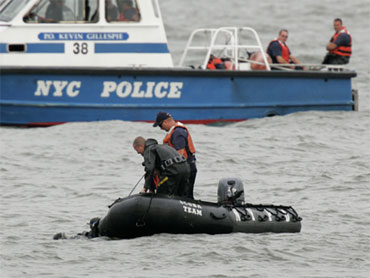 Divers pulled a helicopter and four more bodies out of the murky Hudson River on Sunday in their search for victims, wreckage and explanations from a midair collision of a sightseeing helicopter and a small plane that killed nine people.

The dead from Saturday's crash include three fathers and their three teenage sons. The private plane carried a family from Pennsylvania, and the helicopter held five Italian tourists celebrating a couple's 25th wedding anniversary.

The plane approached the helicopter, which had just taken off for a 12-minute tour, from behind and clipped it with a wing, witnesses said. Both aircraft split apart and fell into the river.

Searchers fought swift currents, dealt with visibility as low as one foot, and dodged debris dumped along the river bottom as they brought four more bodies on to boats. One was found in the fuselage of the helicopter, New Jersey State Police Sgt. Stephen Jones said. Two bodies remained missing.

The collision happened in the same stretch of the Hudson where a US Airways jet landed safely seven months ago. It was the worst air disaster in New York City since a commercial jet crash in Queens killed 265 people in November 2001.

The searches went on as a steady stream of tour boats floated down the Hudson. Restrictions put in place after the crash kept sightseeing helicopter tours grounded Sunday.

Investigators from the National Transportation Safety Board were reviewing flight data from the Teterboro Airport, where the plane took off a little before noon on Saturday.

The plane was not required to have a flight plan and did not file one, said NTSB Chairman Debbie Hersman.

The plane was flying at about 1,100 feet at the time of the crash, she said. Below that altitude, planes in that part of the Hudson River corridor are to navigate visually. Above that, they need clearance from air traffic controllers.

The control tower at Teterboro handed off responsibility for the plane to the tower in Newark about a minute before the crash and told the pilot to contact Newark controllers, Hersman said. But the Newark officials never heard from the pilot.

Additionally, investigators were asking witnesses, thousands of whom were out enjoying a beautiful summer day when the aircraft went down, to provide photos and video capturing the crash and its immediate aftermath.

A pilot on the ground saw the plane approaching and tried to alert the helicopter. He radioed the doomed helicopter and said, "You have a fixed-wing behind you," but there was no response from the pilot, Hersman said.

Hersman said the helicopter was gaining altitude at the time of the crash.

Justin Green, an aviation attorney as well as a certified commercial pilot who has flown over the Hudson told CBS News correspondent Hari Sreenivasan that the FAA could prevent this sort of tragedy.

"They can make the helicopters operate at lower altitude then fixed wing aircraft coming through this area," Green said. "And if you are different altitudes you're never going to have an accident like this.

One of the Italian victims was a husband celebrating his 25th wedding anniversary, a family friend said. His wife had stayed behind because she was afraid of flying, but their 16-year-old son was in the helicopter.

The five tourists were from the Bologna, Italy, area: Michele Norelli, 51; his son Filippo Norelli, 16; Fabio Gallazzi, 49; his wife, Tiziana Pedroni, 44; and their son Giacomo Gallazzi, 15.

The trip was a gift from Norelli's sister, family friend Giovanni Leporati said. "The anniversary already happened but they took advantage of the August holidays and went," Leporati told The Associated Press by phone.

The helicopter company, Liberty Helicopters, released the name of the pilot in the crash: Jeremy Clarke, of Lanoka Harbor, N.J. The NTSB said the pilot, who was born in 1976 and came to work for Liberty last year, had about 2,700 hours of flight time.

"I've flown with him, right after he had got his license," said his former mother-in-law, Betty Mallory. "He was a very responsible, very safe pilot. I wouldn't have had any hesitation flying with him."

The plane's pilot was 60-year-old Steven Altman, of Ambler, Pa., two law enforcement officials told the AP on the condition of anonymity because all the bodies have not yet been recovered or identified. Also in the plane were 49-year-old Daniel Altman, of Dresher, Pa.; and his 16-year-old son, Douglas, the officials said.

A report by the U.S. Department of Transportation's inspector general last month found that 109 people died in accidents involving on-demand flights in 2007 and 2008, while no one died in commercial airline accidents.

Liberty Tours runs sightseeing excursions around the Statue of Liberty, Ellis Island and Manhattan at costs ranging from $130 to about $1,000. Liberty helicopters have been involved in two previous accidents since 1997, but no one was injured.