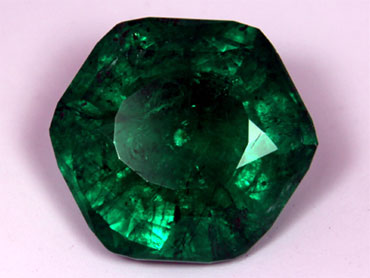 An emerald so large it's being compared with the crown jewels of Russian empress Catherine the Great was pulled from a pit near corn rows at a North Carolina farm.

The nearly 65-carat emerald its finders are marketing by the name Carolina Emperor was pulled from a farm once so well known among treasure hunters that the owners charged $3 a day to shovel for small samples of the green stones. After the gem was cut and re-cut, the finished product was about one-fifth the weight of the original find, making it slightly larger than a U.S. quarter and about as heavy as a AA battery.

The emerald compares in size and quality to one surrounded by diamonds in a brooch once owned by Catherine the Great, who was empress in the 18th century, that Christie's auction house in New York sold in April for $1.65 million, said C.R. "Cap" Beesley, a New York gemologist who examined the stone.

While big, uncut crystals and even notable gem-quality emeralds have come from the community 50 miles northwest of Charlotte called Hiddenite, there has never been one so big it's worthy of an imperial treasury, Beesley said.

"It is the largest cut emerald ever to be found in North America," Beesley said in a telephone interview from Myanmar, an Asian country rich in precious gems.

The discovery is a rarity for emeralds found not in the rich veins of South America and Asia but in North America, said Robert Simon, owner of Windsor Jewelers in Winston-Salem.

"Most of the stones that have come out have not been gem-quality that I would mount in jewelry," said Simon, who was part owner of a 7.85-carat, dime-sized emerald found in the same community in 1998 that has since been set in jewelry and sold to a private owner.

Terry Ledford, 53, found the roughly 2-inch-square chunk rimmed with spots of iron a year ago on a 200-acre farm owned by business partner Renn Adams, 90, and his siblings. The rural community of Hiddenite is named for a paler stone that resembles emerald.

"It was so dark in color that holding it up to the sun you couldn't even get the light to come through it," a quality that ensured an intense green hue once the stone was cut with facets that allowed light into the gem's core, Ledford said.

The North Carolina stone was cut to imitate the royal emerald, Ledford said. A museum and some private collectors interested in buying the emerald have been in contact, Ledford said.

Modeling an empress's emerald is likely to have less influence on the North Carolina stone's sale price than its clarity, color and cut, said Douglas Hucker, CEO of the American Gem Trade Association, a Dallas, Texas-based trade association for dealers in colored gems.

"A 65-carat cut emerald from North Carolina is a big, big stone," he said. But "once an emerald is cut, it's subject to the same type of market conditions that any emerald would be."

Emeralds are part of North Carolina's mineral claim to fame, though other places in the U.S. also are rich in gems. Maine mines have yielded aquamarine and amethyst, Montana bears sapphires, Idaho is known for star garnets, and Arkansas has diamonds.

It's not fully known why small, subterranean cavities containing emeralds formed in central North Carolina, said geologist Michael Wise of the Smithsonian's National Museum of Natural History, who has studied the underground world around Hiddenite for years.

Emeralds are produced where a superheated fluid carrying the element beryllium migrated through rocks that contain chromium, Wise said.

"This doesn't happen frequently," Wise said. "The conditions have to be just right to make an emerald. ... It happens to be the case at this particular place."

Adams said decades ago when his parents owned the farm, they allowed anyone with a shovel to dig for emeralds on the property for $3 a day. Virtually all of it was too full of flaws to be cut into precious stones and was mostly sold to mineral collectors, Adams said.

Ledford said they don't plan to quit after pocketing the profits from their big find, Ledford said.

"We'll definitely keep on mining," he said. "It would be good to know you don't have to go and could do it for pleasure. You feel like you've got to find something to survive but since we found this emerald, once we get it sold, there will be less stress."