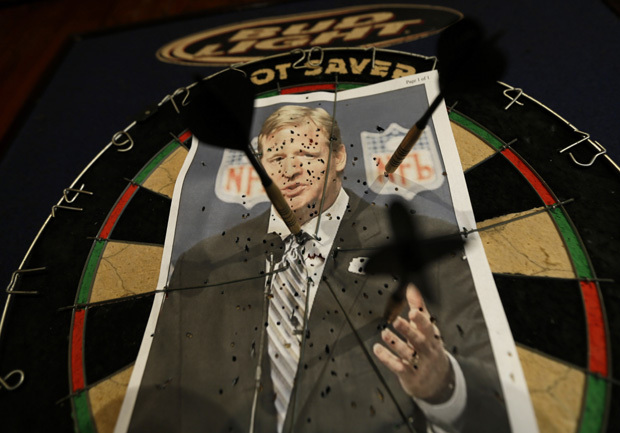 Under the guidance of Roger Goodell, pro football remains - by far - the most lucrative and popular sport in the nation. But the popularity of the NFL commissioner is another story when it comes to NFL locker rooms.

In fact, 61 percent of players disapprove of Goodell, according to a new poll conducted by USA Today.

Most of the 300 players in the survey were granted anonymity but an outspoken Steelers linebacker - who has previously called Goodell a "crook" and "devil" - was more than willing to attach his name to the poll.

"I feel like what he's doing is not totally for the safety of players," James Harrison said. "A lot of stuff they've done, (such as) fining guys crazy amounts of money for helmet-to-helmet hits and all that and saying you're doing this for the safety of players. But yet you want to add extra games to the regular season. In the true interest of player safety, I would have no issue with it. But that's not what it's about. It's about money. Who hired Roger Goodell?"

For the record, the league pulled in $9.5 billion in revenue last season, according to one estimate. That's nearly 25 percent more than the sport in second place, Major League Baseball.

The USA Today survey is in line with sentiment in New Orleans, which is hosting the Super Bowl on Sunday.

An effigy of Goodell dangles from the front porch of a New Orleans home that is otherwise festively decorated with Saints paraphernalia.

With restaurants and bars gearing up for an influx of Super Bowl visitors, the "Refuse to Serve Roger Goodell" page on Facebook had 107 likes as of Friday.

A portrait of Goodell covers the bull's-eye on the dart board at Parkview Tavern.

New Orleans is celebrating the return of their Saints coach Sean Payton after a season of NFL banishment as a result of the "bountygate" scandal - when the team ran a pay-for-hits program. But Goodell, who suspended Payton and other current and former Saints players and coaches last year for their roles in the system, is being ridiculed here with a vehemence usually reserved for the city's scandal-scarred politicians.

"They believe he completely used the Saints as an example of something that was going on league-wide," said Pauline Patterson, co-owner of Finn McCool's, an Irish Bar in the Mid-City neighborhood where the words "Go To Hell Goodell" are visible over the fireplace.

Some of Goodell's critics say the disarray resulting from what they believe were unfair suspensions led to the Saints' losing season, and a missed chance to make history.

"We had a real shot of being the first team in history to host the Super Bowl in our own stadium," Parkview Tavern owner Kathy Anderson said. "He can't give that back to us."

Goodell suspended the coaches and players after an investigation found the Saints had a performance pool offering cash rewards for key plays, including big hits. The player suspensions eventually were overturned, but the coaches served their punishments.

Mayor Mitch Landrieu is among those saying that people in this city, known for its hospitality and history, should mind their manners and remember the not-too-distant past.

"Roger Goodell has been a great friend to New Orleans, and it's a fact that he's one of the people instrumental to making sure that the Saints stayed here after Hurricane Katrina," Landrieu said in a statement. It was a reference to the days after the 2005 storm, when 80 percent of the city was underwater and the damaged Superdome became a shelter for thousands of the displaced.

Then-commissioner Paul Tagliabue and his second-in-command, Goodell, are credited with working to keep the team from abandoning New Orleans for San Antonio.

As CBSSports.com's Mike Freeman notes, it's possible that not only did Tagliabue's efforts keep the Saints in New Orleans, but that without him, the Super Bowl being played here this week might not exist, either.

"What some people forget is what things were like then," Tagliabue said in an interview with CBSSports.com. "There was a deep feeling this was the end of the city as we had known it.

"The leadership of the Saints was talking about leaving before Katrina. Then the storm hit. I wanted to make sure the team wasn't going anywhere."

But some are in no mood to back off when it comes to Goodell.

Anderson said she understands city leaders' desire to put their best foot forward, but that it also was important for Saints fans to be able to vent.

"Whether I have Roger Goodell's face on my dart board is not going to change anybody's mind about the Super Bowl," Anderson said.

People should not take the barbs too seriously, said Lynda Woolard, a Saints fan who has been tracking some of the barbs on social media. "Nobody's saying there should be violence against the man," Woolard said.

Still, some diehards are ready to put it all behind them.

"We've got to look forward here," Brower said. "The more time we spend in the past, it's just not beneficial."