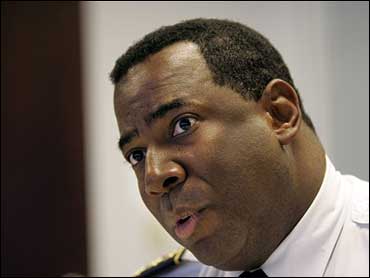 The city's new police chief said he's focused on dealing with officers who deserted their posts after Hurricane Katrina and those who broke the law instead of enforcing it.

Chief Warren Riley defends the majority of his 1,500 officers. But hundreds left the city without permission in the days after the hurricane.

A few rogue cops caused trouble and stirred public uneasiness and mistrust, he acknowledged in an interview Thursday with The Associated Press.

"It's my opinion that only 40 or 50 people, and hopefully some of them are gone, that really makes this department have a bad reputation," said Riley, who was appointed interim chief when Eddie Compass resigned a month after the storm.

The desertions, allegations of theft and looting and the videotaped beating of a retired teacher by police in the French Quarter tarnished the department's reputation. The officers accused of the beating will be tried next month. Allegations of looting and theft are being investigated.

The FBI and federal drug enforcement agents will help train the department in behavior and leadership skills starting in January, Riley said.

In the meantime, he has fired 60 officers and suspended more than 25 others who didn't show up for duty after Katrina struck Aug. 29, leaving much of the city under water and in chaos. Fifty-one of the fired officers were let go before the hearings began, Riley said.

"They did return," Riley said. "But they left without permission, and at a critical time like this, it's totally unacceptable."

Officers missing for 14 days are being fired. Absences under 14 days result in a suspension, Riley said.

Officials have completed 42 of the 228 disciplinary hearings, Riley said. The hearings resulted in two officers listed as AWOL have been exonerated, he said.

The desertion hearings should be done by the end of February, and the three officers arrested for beating the teacher will be tried Jan. 11.

Officials are also investigating a shooting five days after the hurricane in which police confronted seven people on a bridge after workers in boats reported gunshots aimed in their direction. Six people on the bridge were shot, two fatally.

The state attorney general's office and the police are also investigating the theft of vehicles from a dealership. Police say some were used for rescues and patrols after the department lost 300 vehicles to flooding. But one former officer faces federal charges after he was caught in Texas with one of the vehicles.
By Mary Foster