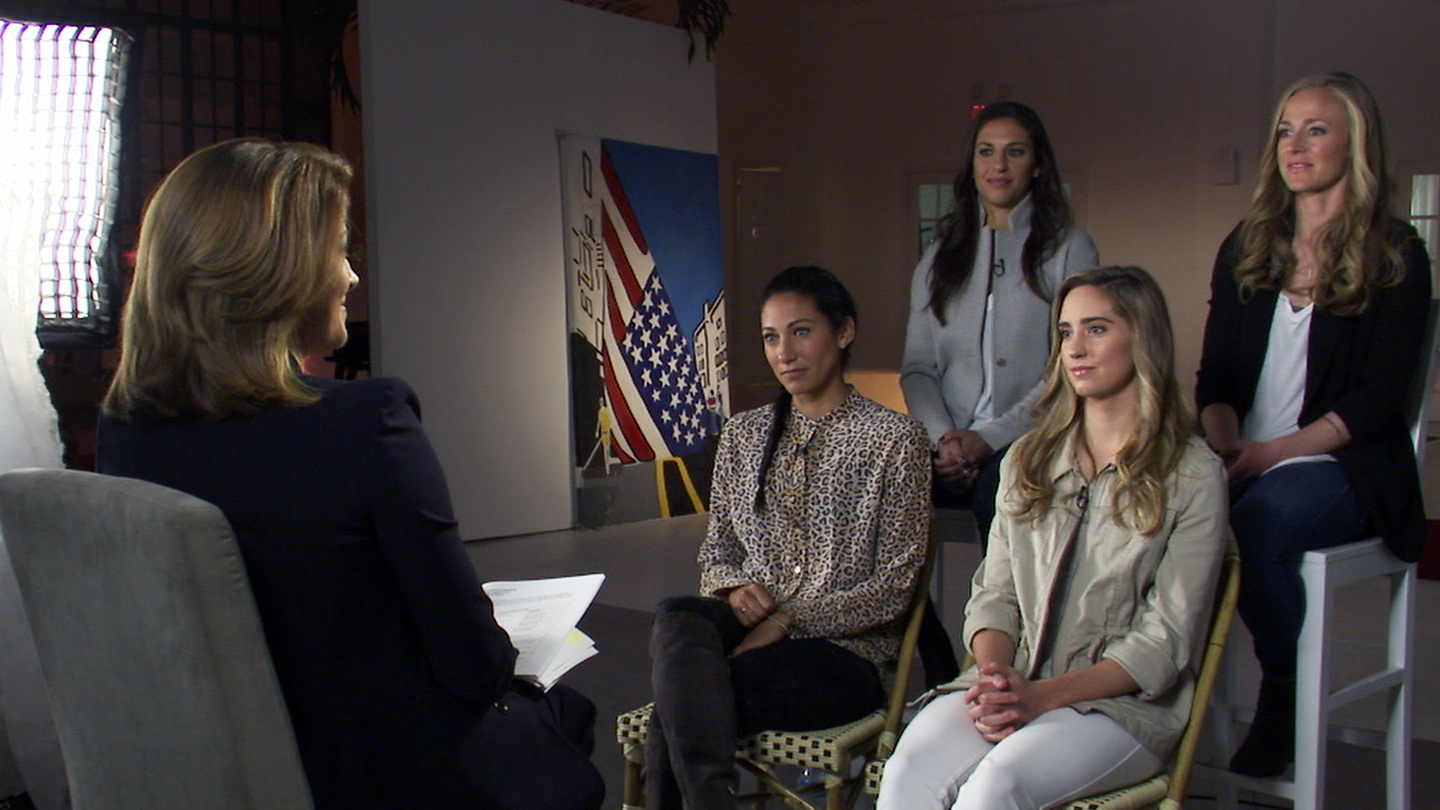 On March 8, International Women's Day, all 28 members of the United States Women's National Team filed a gender discrimination lawsuit against the U.S. Soccer Federation. The federal suit accuses American soccer's governing body of "institutionalized gender discrimination" and seeks back pay and damages. Last month, the players and the United States Soccer Federation tentatively agreed to enter mediation after the 2019 Women's World Cup. On July 7, the USWNT won a record fourth World Cup. In 2016, members of the team spoke with Norah O'Donnell for "60 Minutes." Below is a transcript of that story.

Few teams have been as glorious on the soccer field as the United States Women's National Team. They've won three World Cups, four Olympic gold medals, and set the standard in the most popular sport on the planet.  But despite their achievements, the players say they have been discriminated against, paid less and treated worse, next to the U.S. men's team. Soccer may be known as the beautiful game, but the team has embarked on a bruising and historic legal fight for equality and their opponent is the U.S. Soccer Federation, their own employer. For the players, it's the match of their lives. They hope a victory will help close the gap, not just in sport, but in any job where women do the same work as men for less pay.

Carli Lloyd: We feel like we're treated like second-class citizens because they don't care as much about us as they do the men.

Carli Lloyd is considered the best female soccer player in the world and captains the U.S. team. We recently spoke to her, co-captain Becky Sauerbrunn and their teammates Christen Press and Morgan Brian.

Christen Press: This is a social movement, i think. This is about gender discrimination and I don't think that positive change occurs in the world unless it has to.

"We feel like we're treated like second-class citizens because they don't care as much about us as they do the men." Carli Lloyd

Norah O'Donnell:  How does this fight rank in some of the competitions you've been in?

Becky Sauerbrunn: It's the fight, you know? I mean, we have been in some-- some major-- some major battles on the field but this is-- this could be the fight that we are a part of.

The team is made up of the best female soccer players from around the country and for 25 years they've ruled the world.

In 1999, when Brandi Chastain scored to beat China in the finals of the World Cup, her celebration announced the beginning of a new era in women's sports.

For the 2015 Final, an estimated 30 million people watched on TV in the U.S. as Carli Lloyd's three goals sealed a huge win against Japan.  It was and remains the highest rated soccer match in American history including games played by the U.S. men.

Norah O'Donnell:  How has U.S. Soccer Federation helped you guys make it to where you are?

Becky Sauerbrunn: When you compare this federation to all the other federations across the globe, they have invested the most money in this women's program. They have and that's why we've gotten as far as we have. But to be paid equally, you know, it's-- it's not about what they think it's fair; it's-- it's what is fair.

After their 2015 World Cup triumph, the team was honored with a parade down New York City's Canyon of Heroes. But behind the ticker tape, their relationship with U.S. Soccer was breaking down over a new contract. Outspoken goalkeeper Hope Solo was on the team for 19 years.

Hope Solo: Time and time again we asked that we wanted to be paid equally to the men. And I'll never h--

Norah O'Donnell:  You've been asking for that for many years?

Hope Solo: Yeah, we have, we have. Every time we brought up the men, it pissed them off it, annoyed them, and they'd say, "Don't bring up the men. Don't bring it up."

Globally men's soccer is undeniably more popular and profitable than the women's game.  When Germany won the World Cup in 2014, FIFA, the sports international governing body, awarded them $35 million.  A year later, when the U.S. women won the cup, the U.S. Soccer Federation received $2 million.

Men also make major league salaries playing for brand name club teams.  Women's pro clubs have struggled financially so the women say they rely on their national team income to pay their bills, unlike the men.

Norah O'Donnell: How are they paid differently?

Hope Solo: No. There's two different pay structures. The men get paid per game. Whether they win or lose, they get paid. The women were on a salary-based contract.

It's a pay structure the women themselves wanted and agreed to in 2005 and again in 2013. A consistent salary of up to $72,000 a year and bonuses for wins of $1,350.  They also get health insurance and maternity leave.  The men enjoy no guaranteed salary and fewer personal benefits but they can make as much as $17,625 dollars for a win.

Hope Solo: When you break it down per game, I think it's about three times as much.

Two years ago, Hope Solo convinced the team to hire lawyer Rich Nichols to try to get them a better contract.

Norah O'Donnell: What kind of deal would the women accept?

Norah O'Donnell: Well, what does equal mean? You want the same agreement the men have?

Morgan Brian: We have to win and perform in order to even make $1,350.

Norah O'Donnell: You're professional women. You signed this deal. You look back and say, "Why did I agree to that deal?"

Becky Sauerbrunn: A little bit but it's also when it comes down to it, we just kind of had to be like, "Oh, you're just gonna say, 'no,' to everything that we're putting on the table?" and so we didn't know how to fight and in which ways we could fight.

Norah O'Donnell: Do you think you should be paid more than the men's team?

Carli Lloyd: We win. We're successful. Should get what we deserve.

Last year, the top female players did make more money from U.S. Soccer than the men's team, but their lawyer Rich Nichols says that's only because they played and won more games than the men.

Norah O'Donnell: So you mean had they not been winning, they would not have made anywhere close to what the men made.

Despite being upset at last Summer's Olympics, the women are still No. 1 in the world according to FIFA. They say their fight is only with U.S. Soccer, not with the U.S. men's team, who are ranked a respectable if unspectacular 24th in the world.

President Obama: "This team taught all America's children that playing like a girl means you're a bad ass."

On stage at the White House in October 2015, they were national heroes celebrating their latest World Cup win. Back on the job they were disgruntled workers whose negotiations with U.S. Soccer had ground to a halt and grown increasingly bitter. The women decided to change tactics.  Enter the federal agency known as the EEOC or the equal employment opportunity commission.

Norah O'Donnell: Why file this suit with the EEOC?

Becky Sauerbrunn: We wanted to put pressure on them and so with the EEOC complaint it seemed like a no brainer for us.

Their complaint accuses U.S. Soccer of violating the Equal Pay Act and Title VII – which protects employees against discrimination based on sex. The commission has the power to award damages, issue the right for workers to sue, or do nothing at all.

Norah O'Donnell: This has never been done before?

Rich Nichols: No, not by professional athletes, no.

Norah O'Donnell: Why is this case so different?

Rich Nichols: Because it's-- there's never been a situation where the same employer has hired men and women to play the same sport under the same working conditions.

Norah O'Donnell: Like the WNBA and the NBA are two separate organizations?

The federations' lawyers responded to the EEOC complaint by saying "any differences in the compensation paid men and women players are driven by factors other than gender."

Major factors according to U.S. Soccer are revenue and TV ratings.  They say men's games, on channels like ESPN, average audiences four times larger than the women.

But the federation sells both teams to broadcasters and sponsors as one entity, this year for about $45 million dollars.

The president of U.S. Soccer is Sunil Gulati. He teaches economics at Columbia University.  We requested an interview with Mr. Gulati, but he declined.  In a statement the federation said they "are actively working to reach a new … agreement with the [women's team]"

Becky Sauerbrunn: And they're looking backwards, you know? We're looking to go forwards from now and on and we've shown-- and they've projected in their own financials that we are going to make them money. So it's, I think, unfair to pay us less based on performances in the past.

According to U.S. Soccer's own projections for this year, the women will net about $5 million from ticket sales. While the men will lose about a million dollars. But it turns out this labor dispute is about more than just money. 60 Minutes has learned the EEOC is also asking questions about the differences between the men and women when it comes to playing conditions, equipment, and travel.

Norah O'Donnell: How do the women travel to games?

Norah O'Donnell: The men though, is part of their agreement, fly first class?

Morgan Brian: To be able to perform like we do and to be the best in the world, we should be treated the same as them.

We were curious what this fight means to a younger generation of female soccer players.

Asia Horne, Analiese Schwartz, Sarah Sullivan and Joelle Kelly told us they closely follow the Women's National Team on social media. They play for Marymount an all girls school in Manhattan and for local soccer clubs where they've also noticed differences in how the male and female teams are treated.

Asia Horne: The boys' teams would get more field time than the girls' teams. We would have to share space with other age groups while the boys would have full field.

Norah O'Donnell: So, Joelle, given what the disparities that you've noticed and what you're witnessing the U.S. Women's Soccer Team do, what's the lesson that you learn from that?

Joelle kelly: What they're doing is for us. So we can have that equal pay and that-- so that we can be on the same level as men.

The women's contract with U.S. Soccer expires this coming New Year's Eve.  Whether or not the EEOC decides in their favor, they say they will remain focused on their goal with all options on the table.

Becky Sauerbrunn: It would be a discussion that we would have to have.

Norah O'Donnell: There's a possibility that they may strike if they don't get equal pay, would you support that?

Female voice:  'Cause nothing's gonna change if they don't stand up for what they want, they're never gonna get it.

Norah O'Donnell: Would you like to meet some women on the U.S. Women's Soccer Team?

Norah O'Donnell: What does it mean to meet these guys?

Carli Lloyd: This is history-making, what we're doing, what we're fighting for. It not only resonates with this team and with generations to come but it's global as well.

Norah O'Donnell: Carli, you keep saying you're united. How far are you gonna take this?

Carli Lloyd: Until we get what we want.