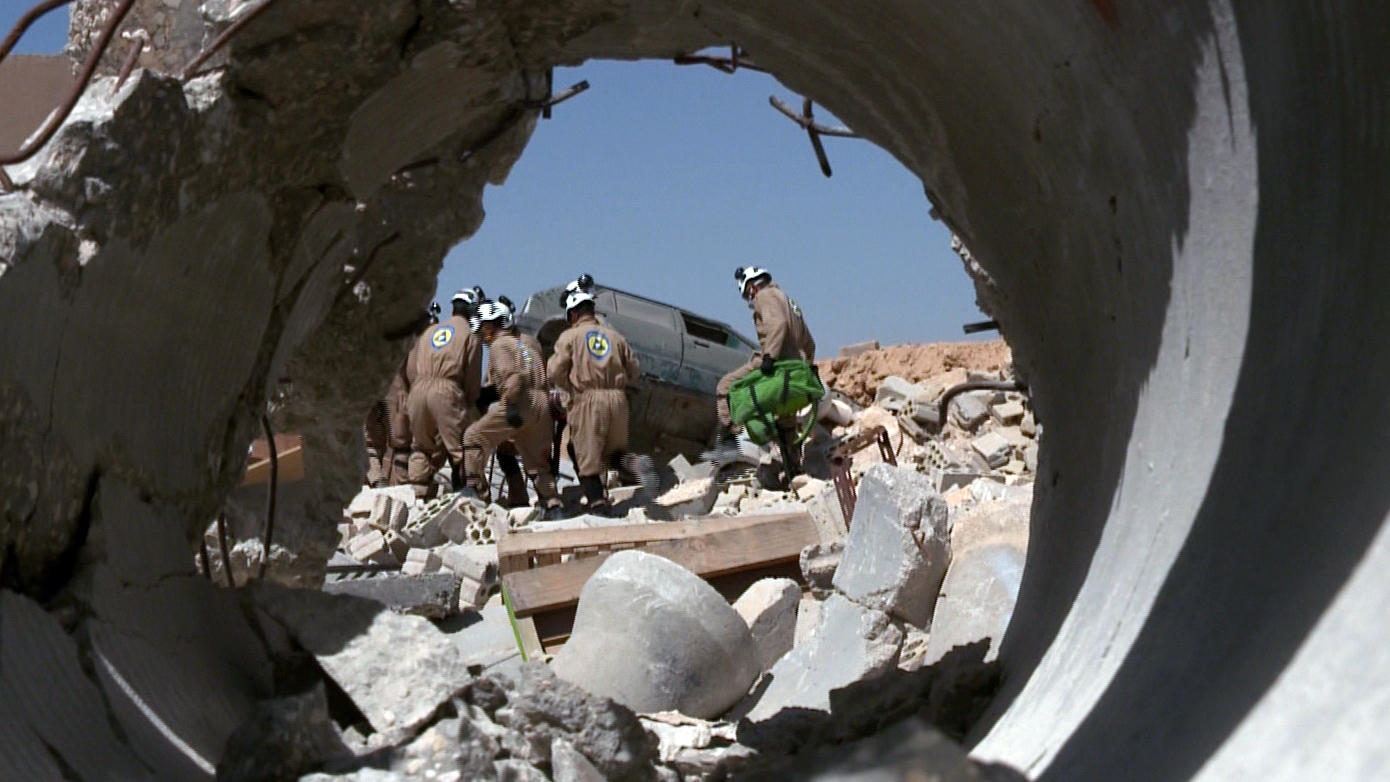 The following is a script from “The White Helmets,” which aired on Dec. 18, 2016. Scott Pelley is the correspondent. Nicole Young and Katie Kerbstat, producers.

A great city that once held more than two million people is on the edge of surrender after five years of siege and starvation. Aleppo is the center of the rebellion against the Syrian dictatorship of Bashar al-Assad. And this past week, Assad and his Russian ally, intensified their air strikes against Aleppo’s dense neighborhoods. For civilians, under this bombardment, the greatest fear is to be buried alive -- to suffocate or bleed to death in the rubble of their own home. Their only hope is the Syrian Civil Defense, a self-appointed, all Syrian, volunteer force of rescue workers who call themselves the White Helmets.

The airstrikes, day and night, obliterate apartments and shatter the nerves. Often, the bombs are not aimed at military targets -- they’re not aimed at all -- just a barrel of shrapnel and TNT, heaved from a helicopter, onto any neighborhood the Assad dictatorship does not control.

Rami Jarrah: It’s to terrorize people in this area. It’s to tell these people that, “You’re not welcome here and we want you out.”

Rami Jarrah is a Syrian reporter who’s followed the White Helmets from their makeshift beginnings to today’s trained force of 3,000 rescue workers.

Rami Jarrah: They provide some sort of security or safety or some sort of hope to civilians that live in this area that even if you are attacked, even if your building comes down, there is someone that’s going to come and save you.

Scott Pelley: You are not alone.

Rami Jarrah: I think for them it’s luck. It’s that-- that they dig any rubble that they see to get those people out. They frantically dig through every part of any apartment building or anything that’s been destroyed to check. They’re usually there for hours after the attack.

Scott Pelley: How many hours?

This is that same boy, his face freed. They excavated the ruin hour-by-hour. The White Helmets say they have saved 70,000. And with each, they shout their gratitude to God.

Khalaf said, “We feel as if we’ve brought that person back to life. The joy at that moment is indescribable.”

Scott Pelley: Tell me about the hardest rescue you’ve ever done.

“There was a woman and her husband,” he told us. “Only four of her fingers were sticking out of the rubble. We could see her moving her fingers like this. So my colleagues dug her out. And the first thing she asked about was her husband, they’d been married to for 10 days. Unfortunately, her husband had been killed.”

Fingers, or here, the leg of a boy, are clues in a chaos of concrete. The leg led to hips and a torso -- body parts are expected -- but then they uncover a face, but more often than anyone could expect, life is resurrected from a shallow grave.

Scott Pelley: When you uncover one of these faces covered with dust, and the eyes open, what is that moment like for you?

Rady Saad told us, “I don’t have any feelings. I have a goal. The goal is to save the most people in the least amount of time. But when I go home, I’ve spent nights crying, really crying.”

Day after day, building after building, hour after hour, victim after victim, how do you keep going?

“There are a lot of people who need our help,” he said.

Rady Saad calculates his odds at 50/50 because the White Helmets themselves are targets of the Assad regime.

Rami Jarrah: The plane doesn’t attack once. It usually attacks twice or three times. So the Civil Defense are able to actually continue doing their work even understanding that that plane is waitin’ for people to gather up because it wants to come back and attack when there’s a large crowd of people.

The White Helmets call that second bomb run, the one aimed at them, a double tap. And it happened during this rescue in Aleppo.

Raed Saleh wears the loss of his men and his country. He once owned an electronics business. The White Helmets in more than 100 towns elected him their leader.

Scott Pelley: How many of your people have you lost?

He told us a White Helmet had been killed that morning. And as of last week, Saleh has lost 154 volunteers.

Scott Pelley: How did the White Helmets begin?

“After several bombings,” he said, “there were individual initiatives by regular people—tailors, blacksmiths, carpenters, university students, doctors; people from different backgrounds—who formed teams to respond to emergencies in a more organized fashion. After that, there was communication with outside organizations who began to train these teams.”

This is the training in a country we agreed not to name. Elite disaster teams from other nations teach the use of microphones, to sense vibrations, and cameras to peer into crevices. The United States chipped in $29 million for this, about a quarter of the White Helmets’ budget.

This home was blasted into a family’s tomb. The only thing escaping was one, faint, voice. A White Helmet, searching, calls out…

“…Brother can you see our light?” The voice replies, “Something’s on my back.” He’s right. It’s the roof. But for an inch, the 16-year-old boy would be dead. You’re looking at him, right there, face down, this is his shoulder and his right arm, already in a cast. No architect’s calculation of blast loading or lateral resistance can explain the simple miracles of survival.

After seven hours, it appears the boy emerged an orphan and only child. Everyone else in the house was dead.

Hadi al-Abdullah is a Syrian journalist who posts stories of the White Helmets on YouTube.

“If there is meaning to the word courage,” he said, “it is represented by the Civil Defense.”

Abdullah’s stories caught the disapproving notice of the Assad dictatorship. And last June, the door of his apartment building was connected to a bomb.

“Without me hearing any explosion,” he said, “there was stone and steel on top of me and I couldn’t move any of my limbs.”

“When I heard the sound of the Civil Defense bulldozer, I started to feel some hope that I might live.” “Slowly, the stone started to be removed, rock by rock. All of the weight started to lessen.”

Scott Pelley: Just hearing their voices gave you hope that you would live?

“Exactly,” he said. “I was able to breathe, to hear their voices. It was difficult to open my eyes but I opened them a little and saw them, wearing their white helmets. I was so happy that I was out of the rubble.”

Scott Pelley: They said you were going to die, and then you returned to life.

Abdullah endured more than half a dozen surgeries, then, returned to Syria in a wheelchair to continue his reporting.

In Turkey, we visited this clinic for Syrian amputees and you find most everyone owes their life to the White Helmets.

Scott Pelley: They tied a tourniquet around your leg.

“Then they put us on stretchers and took us to the field hospital.”

“They didn’t leave me there to bleed to death,” she said. “I would be in heaven if not for the Civil Defense.”

It seems, in every rescue there are children. This man flailed for freedom and just below him, a child’s head, inches this side of the living. This woman told us her entire family was buried. And she was rescued first.

But after 16 hours of labor, her baby was brought into the world, a second time.

“Everyone told me that he’s a miracle child. It really is a miracle.”

Two years later, her son is all she has. Her husband and daughter are dead. The man who saved her boy, 31-year-old Khaled Harrah, was later killed in a double tap. He had two children and another on the way.

The White Helmets respond to an average of 35 attacks a day. Fighting for life in a vicious war, they were nominated, this year, for the Nobel Peace Prize. Syria has descended into murder on an industrial scale. But on the outer limits of cruelty, humanity begins.