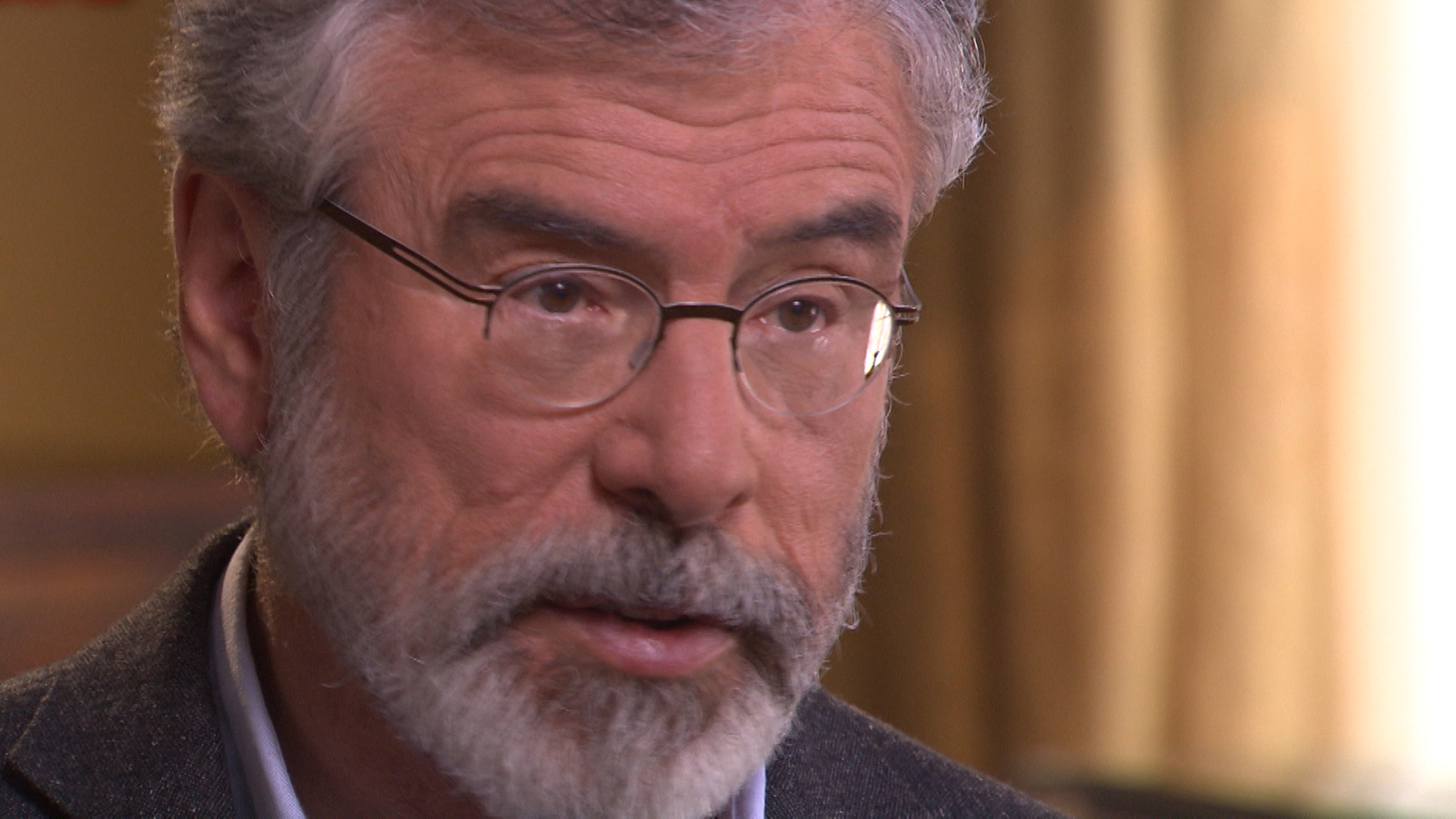 Gerry Adams, the prominent Irish Republican politician and president of the Irish Sinn Fein political party, speaks to Scott Pelley in a rare interview. Adams has been accused of past involvement in the militant Irish Republican Army and of complicity in the notorious murder of Jean McConville in 1972 by the IRA. These longtime charges heated up a few years ago when researchers at Boston College released excerpts from oral histories taped with former Irish militants, one of whom directly accuses Adams of giving the order to kill McConville. Adams addresses these allegations and the controversy generated by his subsequent arrest and release over the Boston College tapes, in the interview to be broadcast on 60 Minutes Sunday, April 5 at 7 p.m. ET/PT.

Many believe Adams could be the Republic of Ireland's prime minister someday. He is careful in his answers to questions about his affiliation with the IRA, for whom many Catholic Irish voters sympathize. He tells Pelley he never pulled a trigger, ordered a murder or set off a bomb during the decades-long war in Northern Ireland that he helped to stop in 1998.

McConville, a widow and mother of 10, was killed because she was believed to have betrayed the Catholic IRA by informing on them to the British - the group's enemy, along with Protestants who supported British rule in Northern Ireland. Her body, bullet hole in its skull, was found in 2003.

In 1984, Adams was shot three times in Belfast, Northern Ireland, in an attack that a Protestant militant group said was retribution on Adams for orchestrating attacks on Protestants. Nonetheless, he says it was a surprise to learn that McConville had disappeared back in 1972. "I didn't know," he tells Pelley, who then asks, "How do you orphan 10 children?" to which Adams replies, "That's what happens in wars, Scott....That's what American soldiers do, British soldiers do, Irish Republican soldiers do, that's what happens in every single conflict."

Adams says he called the police when he heard about the charges on the Boston College tapes; he was arrested and held for four days. Did his arrest threaten the peace, asks Pelley? "I think so, to be honest, I was sick, sore and tired of a tsunami of stories based upon these tapes linking me to Mrs. McConville's death. So I contacted the police."

As Pelley reports, Northern Ireland is still very much divided. Despite a "Good Friday" agreement for shared power in the country between the Protestant majority and the Catholic minority reached with Adams' help in 1998, walls separate neighborhoods and Catholics will only call a Catholic cab, Protestants patronize their own livery services. Other businesses still operate that way to a certain degree.

Helen McKendry, now a grandmother, was one of the 10 McConville children orphaned in 1972. She doesn't believe Adams. "He's a liar...I would like Gerry Adams to stand up and admit he played a part," she tells Pelley. "This man has blood on his hands and I want him to pay for what he did.