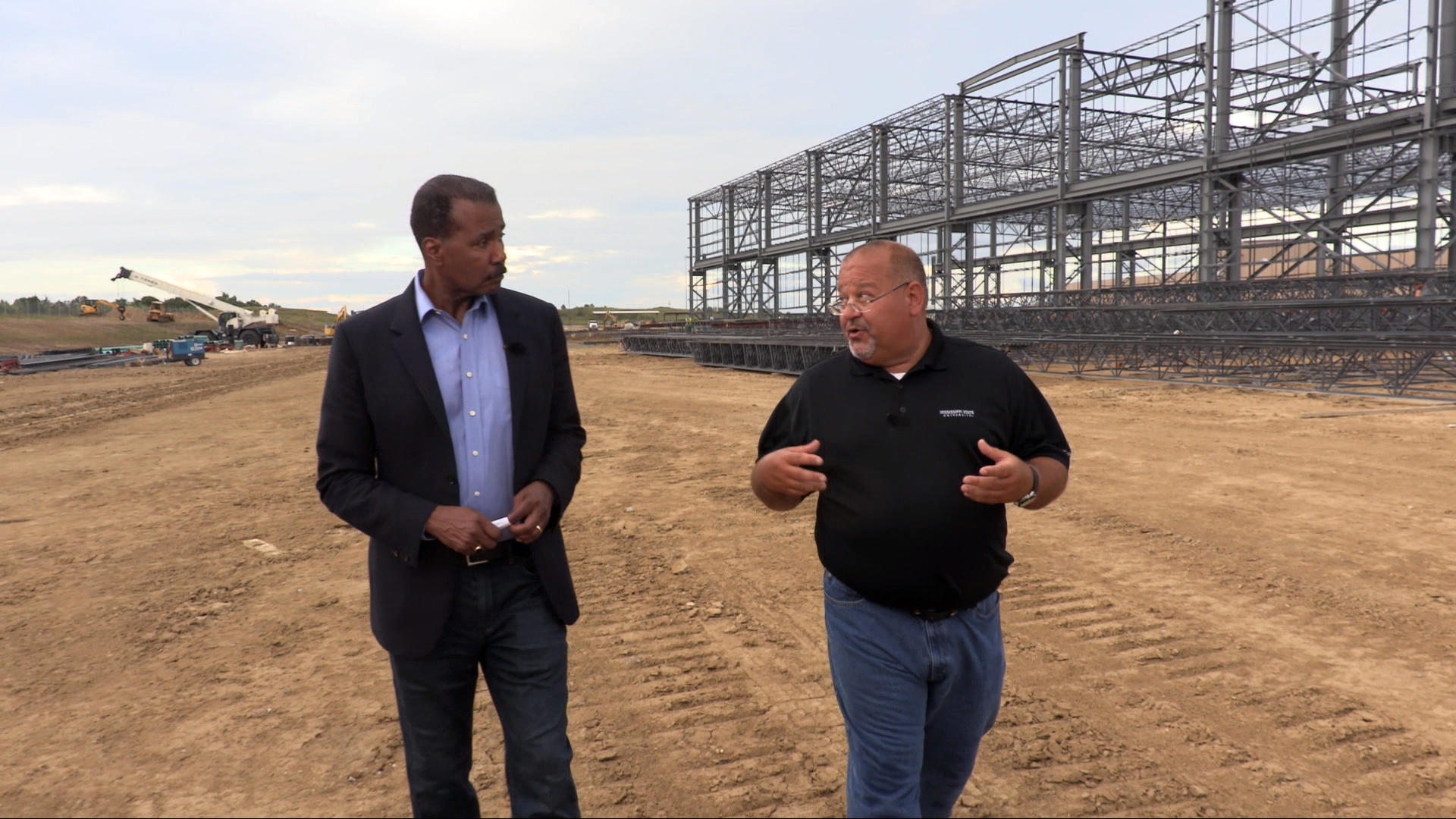 The following script is from “The Golden Triangle,” which aired on Dec. 4, 2016. Bill Whitaker is the correspondent. Marc Lieberman and Michael Kaplan, producer.

This past week, Donald Trump cut his first deal as president-elect. He leaned on Carrier, the heating and air conditioning company, to keep 1,000 jobs in Indiana from going to Mexico. The company got a generous tax break in return. In the last few decades, America has lost millions of factory jobs offshore. But you might be surprised to learn U.S. manufacturing is showing signs of coming back due to cheap energy, proximity to customers, and a rising cost of labor in China. Nearly a million manufacturing jobs have been created since the Great Recession. About 350,000 are unfilled because factories can’t find properly trained American workers. The new plants demand more brainpower than brawn.  It’s called advanced manufacturing and if you want to see what it looks like you need to go a place off the beaten track: The Golden Triangle. That’s a bit of a misnomer because it’s one of the poorest regions in the poorest state: Mississippi.

If you have heard of the Golden Triangle, it might be because of this: Mississippi State football.  Around here, everybody loves the Bulldogs.  And “bulldog” is an apt description of the man who runs economic development for the area: Joe Max Higgins.  He considers job creation a full contact sport.

Joe Max Higgins: The only way we win any deal is to tear off everybody else’s face. We gotta kill everybody to win the deal.

Ferocity is a job requirement. During the recession, unemployment in some parts of the Triangle got as high as 20 percent.

Joe Max Higgins: We’re going to come up with a program.

At 6.0 percent, unemployment is now just above the national average and a lot of people here credit Joe Max Higgins. He has attracted $6 billion of advanced industry including this mill run by Steel Dynamics.  It’s one of the most hi-tech steel mills in the country.  He got this helicopter factory up and running. Truck maker PACCAR used to build engines only in Europe.  It opened its first U.S. plant in the Triangle.

Bill Whitaker: Companies were moving around, this offshoring. They were going to countries where everything’s cheaper?

Joe Max Higgins: For some companies, offshore wasn’t as great as they thought it was or as it was portrayed to be. Many of the companies said “Hey, if it’s gonna be consumed in the U.S., we can produce it in the U.S. cheaper and more efficiently than we can elsewhere and bring it in.”

Bill Whitaker: They save money by being here in Mississippi?

Higgins has brought in 6,000 jobs to the tri-county area since 2003.  That might not sound like a lot to people in big cities.  But to the people here in the small towns of the Golden Triangle, it amounts to about half the manufacturing jobs lost during the last 25 years. Through the 1990s, factories here produced textiles, toys, and tubing.  One by one, they shut down and thousands of low skilled jobs vanished.

Bill Whitaker: So where’d all these jobs go?

Joe Max Higgins was hired away from his economic development job in Arkansas to stop the hemorrhaging here in the Triangle. He makes $250,000 a year, paid by a partnership of the three counties and local businesses. People here will tell you he earns every penny.  He’s like a very demanding head coach.

Joe Max Higgins:  There’s no taking plays off never, OK? I tell our staff, “If you leave our office and-- and you didn’t do somethin’ to make our place a better place today, then you need to find another job.”

Joe Max Higgins: Well, it’s probably what I should be.

Right away, he coached his small staff to the Triangle’s biggest win in 50 years.  They beat out Louisiana, Missouri and Arkansas – convincing the steel mill that building here was its smartest and cheapest option.  Since 2007, 24 hours a day, scrap metal is dumped into giant buckets, lifted into an electric furnace and melted down in a fiery display.  In the old days, a mill like this would have needed 4,000 workers.  Here it takes only 650 to churn out more than 3 million tons of steel a year.  Electrician Jared Glover took us as close to the blazing furnace as you can get.

Bill Whitaker: This is all automated?

Jared Glover: All the workers, we’re just a small force.

This is what advanced manufacturing looks like.  A small highly trained workforce keeps the automation humming.  Jared Glover used to work at a lumber mill living paycheck to paycheck.  Now he earns more than $100,000 a year, about three times his old salary.

Bill Whitaker: What has that meant to you and your family?

Jared Glover: Had two kids comin’ here, and now I got four, and we got a bigger house. Got a little more land. You know, we’re-- they got a good school they go to, and everybody’s happy.

Joe Max Higgins is the very definition of down home.  But don’t be fooled.  It’s a good bet he’s got more hard-edge, business savvy then many Harvard MBAs.

He outwits the competition with a bag full of tricks.  He can twist your arm or kill you with kindness.  He can wear you down.  He lobbies relentlessly and so far has rounded up a half billion dollars in generous tax breaks and cash incentives from state and local politicians.

Joe Max Higgins: Here, there’s four million in here. Let me tell you how this is structured.

Bill Whitaker: When I look out here I see beautiful green agricultural land. What do you see?

Joe Max Higgins: Well, when I-- I-- when I look at the land, I see it as product for us to develop.

He bet the farm that in this state with weak labor unions, he could attract industry like a magnet if he turned that land down there into massive industrial ready sites.

Bill Whitaker: If you build it, they will come?

Higgins had to convince county supervisors to spend almost $12 million on that first site where Steel Dynamics now sits.  He’s since built up three other so called megasites and envisions more.  It wasn’t an easy sell at first.  He told us people in the Golden Triangle were paralyzed by the decline and poverty.  He saw an area rich in assets:  an airport, railroads, waterways that ran north to the Great Lakes and south to the Gulf Coast, and a quality engineering program at Mississippi State.

Joe Max Higgins:  I said, “These guys should be winning,” you know? “It’s—something’s not right.”

Allegra Brigham, the former CEO of the local power company, and John Davis, a bank executive, served on the search committee that recruited Higgins.  They thought his brash style would shake up the status quo.

Bill Whitaker: Before Joe came in, what would have been considered a success?

Bill Whitaker: So when did he start to turn things around?

He pressed the county to fork over $400,000 for water and sewer to get the helicopter plant off the ground.  Today, 200 workers hand craft about 50 helicopters a year mostly for the Army and law enforcement.  The average pay on the factory floor: $50,000 a year plus full benefits. They made the helicopter we flew in.

Bill Whitaker: What sort of impact did that have on the community?

Joe Max Higgins: I think the helicopter plant kind of transformed this region and here’s why: It was literally making something that flew. That was the project that gave us some reason to believe. “We can do this.”

Just when it seemed things were taking off, the Golden Triangle was blindsided. Its biggest industrial employer, Sara Lee’s century-old pork processing plant, shut down.  It once employed 2,500 people.  This is the factory today.  Single mother Nina Head worked on the slaughter floor for 14 years, until the day it closed.  She had six young children at home.

Nina Head: That was the heartbeat of the Golden Triangle.

Bill Whitaker: And when those jobs went away?

It was Joe Max Higgins’ biggest challenge. He became obsessed with winning the next deal. He found out PACCAR was considering building its engine plant in Jonesboro, Arkansas, near where he grew up.  He got on his motorcycle and rode home to scope it out.  When he got back, he convinced county supervisors to build this substation to undercut Arkansas with cheaper power.  He won the deal.  Today, it’s a $500 million facility filled with robots and about 500 humans.  When PACCAR began hiring, 3,000 people applied for the first 50 jobs.

Bill Whitaker: Is the work force here prepared for these new jobs coming in?

Joe Max Higgins: Nobody in the Golden Triangle made engines. Nobody made any of this stuff. So what you’re really looking for is, do our citizens have the acumen for work? Do they have the work ethic? Are they skilled enough to be trained to do jobs? And the answer is yes, yes, and yes.

Joe Max Higgins enlisted the community college to provide customized training for PACCAR so when the plant was ready, the workforce was ready.  Nina Head now works there doing quality control.  She makes $10,000 a year more than on the kill floor at Sara Lee.

Bill Whitaker: When you first got here, did you have the skills required for this job?

Nina Head: I’ve never worked with robots.  So I had to be trained to do that. But I had the skills ‘cause I went to school to learn how to get the job.

The school now gears its training for each manufacturer coming in. Higgins told us it’s the critical part of his business plan. The promise of a trained workforce caught the eye of his biggest catch yet: Yokohama Tire. The Japanese company plans to employ 2,000 workers not far from the old Sara Lee plant.  It considered every county in the continental U.S. So Higgins pulled out all the stops. He tracked the tail number of the private plane shuttling Yokohama executives from site to site to find out who his competitors were.  When the executives came to the Triangle, Higgins had researched their shoe sizes and had galoshes ready for them to tour the muddy site.

Bill Whitaker: This is not just about making executives feel comfortable?

What Joe Max Higgins has done is burnish the Golden Triangle. Local tax revenue is going up.  This construction site is an expansion of the steel mill.  People now expect the coach to win.  Higgins has his eye on 10 more advanced industry projects and 4,000 more jobs.

Bill Whitaker: So the people who say that the glory days of American manufacturing are over, you say?

Joe Max Higgins:  I think it can be, yes.

The economic emergency created by coronavirus