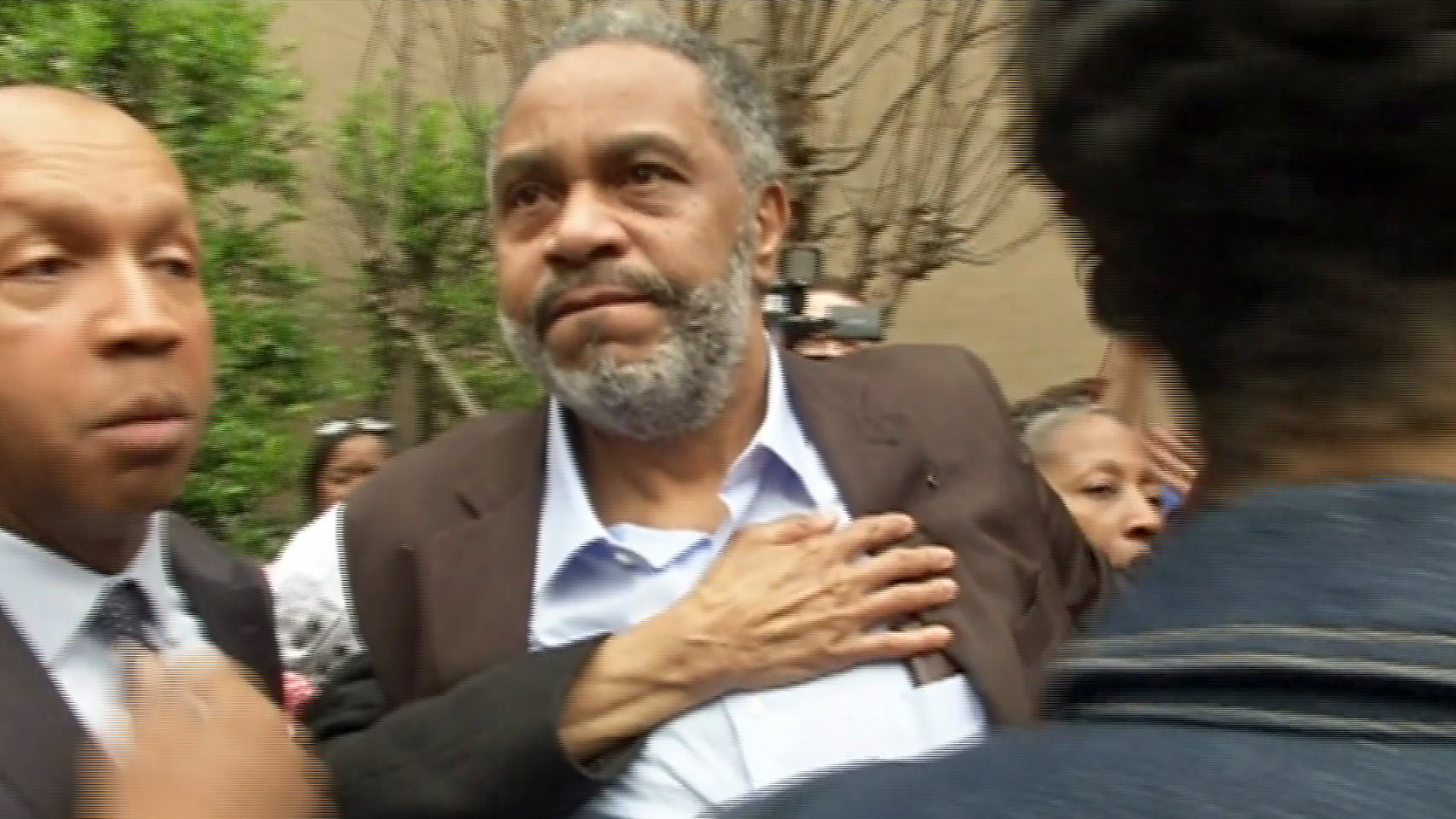 The following is a script from "Life After Death Row" which aired on Jan. 10, 2016. Scott Pelley is the correspondent. Henry Schuster, producer.

About 10 times a month now, an innocent person is freed from an American prison. They're exonerated, sometimes after decades, because of new evidence, new confessions or the forensic science of DNA. There is joy the day that justice arrives, but we wondered, what happens the day after? You're about to meet three people who have returned to life from unjust convictions. One of them, Ray Hinton, was on death row. He remembers, too vividly, the Alabama electric chair and the scent that permeated the cell block when a man was met by 2,000 volts. Hinton waited his turn for nearly 30 years until this past April.

That's when Ray Hinton stepped out of the shadow of execution. Taking the first steps that he chose for himself since 1985.

Ray Hinton: As though, I was walking on clouds. I wanted to get away in case they changed they mind. You know.

Ray Hinton: I was not going to allow myself to really believe that I was free until I was actually free.

Free to visit his mother who went to her grave believing her son would be executed. The cemetery was Hinton's first destination. And he was startled by a world that had moved on without him.

Ray Hinton: We headed toward the graveyard and a voice come on and said, "At two point so many miles turn right." And I said, "What the hell? Who is that?" And he said his GPS tracker. I knew I didn't see no white lady get in that car. I wanted to know how did she get in that car and what is she doing in this car. Man, come on.

Any voice tended to be a surprise; on death row, Hinton spent most of every day, alone.

Scott Pelley: After 30 years inside, mostly by yourself, did you worry about coming back out into the world?

Ray Hinton: You get out and you just out. If you don't have a place to live or money or whatever, you ask yourself, "What am I gonna do?" But my best friend stuck by me for 30 years. And he had already told me "Whenever you get out, you come live with me and my wife."

Scott Pelley: What did you have to learn after you got out?

Ray Hinton's life was never what he thought it would be after 1985 when he was misidentified by a witness who picked him out of a mug shot book. His picture was in there after a theft conviction. When police found a gun in his mother's house, a lieutenant told him that he'd been arrested in three shootings including the murders of two restaurant managers.

The lieutenant denied saying that. But Hinton was convicted at age 30. He was 57 when the U.S. Supreme Court ruled 9 to zero that his defense had been ineffective. A new ballistics test found that the gun was not the murder weapon.

Ray Hinton: Thirty years ago a judge proudly stood up and said, "I sentence you to die." Thirty years later no one had the decency to say, "Mr. Hinton, we sorry for...uh...we sorry for what took place." No one have said it.

Scott Pelley: What did the State of Alabama give you to help you get back up on your feet?

Ray Hinton: They dropped all charges and that was it.

Scott Pelley: No suit of clothes?

Ray Hinton: Nothing. No.

And that is where many states are failing the growing number of exonerated prisoners. It turns out in Alabama if Ray Hinton had committed murder and was released on parole, he would have been eligible for job training, housing assistance and a bus ticket home. But most states offer no immediate help to the innocent who's convictions can be embarrassing because of misconduct or incompetence by police or prosecutors.

Bryan Stevenson: You can't traumatize someone, try to kill someone, condemn someone, lock someone down for 30 years and not feel some responsibility for what you've done.

Ken Ireland: It was just absolutely unimaginable and I couldn't even explain the horror of it.

Ken Ireland lost 21 years. He was misidentified by witnesses who collected a $20,000 reward. Convicted in a 1986 rape and murder, DNA proved his innocence.

Because of the rare perspective of an innocent man who's done hard time, the governor put Ireland on Connecticut's parole board.

Scott Pelley: So this is your new cell?

It took five years to get this job. At first, he lived with his sister. And he found work as a counselor for troubled kids.

Ken Ireland: When I first was released, I got a little small apartment in town. I mean there was the nights where I just barricaded myself in a big walk-in closet and slept in there. Just thinking, you know, you know, someone's going to come kick down my door and drag me back.

Scott Pelley: You slept in a closet?

Ken Ireland: Yeah, yeah, a few times I have.

Scott Pelley: Are you over that now, six years later?

Ken Ireland: Yeah, I don't have them issues now. It gets easier and easier every day.

One thing that made it easier was Connecticut's new law that compensates the wrongly convicted. A year ago, Ireland was the first to get a check.

Scott Pelley: What did the state give you?

Ken Ireland: That's more than most states are giving.

Scott Pelley: Well it comes to something like 300,000 dollars a year for every year you spent in prison. And you say it's not worth it?

Ken Ireland: Oh, absolutely not. Absolutely not. They could give me five million for every year and it still wouldn't be worth it.

Ken Ireland was fortunate, if you can call it that. Twenty states offer no compensation at all, one, is Julie Baumer's home, Michigan.

Scott Pelley: Other than the time, what have you lost?

In 2003, Baumer was a mortgage broker raising her sister's baby. He became ill so she took him to an emergency room. Doctors there suspected the boy had been shaken until his brain was damaged. Baumer was convicted of child abuse. She was in her fifth year in prison when new evidence showed that the boy had suffered a natural stroke. She was retried, acquitted and the judge apologized. After she was released, for a time, she was homeless.

Scott Pelley: How did you start over?

Julie Baumer: It was very, very, very rough. You start from the bottom reclaiming your identity. I didn't have an ID. And then after I jumped over that hurdle, then you start applying for jobs. And then you have to go through OK, well, now there's a five gap-- year gap on your résumé. Why is this? And then you tell your potential employer the truth. In my case, I never got phone calls back.

Scott Pelley: There was no support for you of any kind.

Julie now works for a Detroit-area parish. In her spare time she's lobbying Michigan's legislature for a compensation law.

Julie Baumer: No amount of money can ever bring back everything that I've lost.

Scott Pelley: No one can fail to see the injustice in these cases. But when it comes to compensation, there are people watching this interview who are saying, "You know, it was just bad luck and we don't necessarily owe them for the life that they lost."

Bryan Stevenson: This isn't luck, this was a system, this was actually our justice system, it was our tax dollars who paid for the police officers who arrested Mr. Hinton. Our tax dollars that paid for the judge and the prosecutor that prosecuted him. That paid for the experts who got it wrong. That paid to keep him on death row for 30 years for a crime he didn't commit. This has nothing to do with luck. This has everything to do with the way we treat those who are vulnerable in our criminal justice system.

Ray Hinton is considering applying for compensation but Alabama has paid only one exoneree after 41 claims. In the meantime, attorney Bryan Stevenson has been Hinton's guide to advances like ATMs and smartphones and to frustrations that never change, like getting a license at the DMV.

Ray Hinton: Whether I ever catch up with the world I don't know but I'm gonna try.

Hinton is working part-time now speaking about justice and faith.

Ray Hinton: I can't get over the fact that just because I was born black and someone that had the authority who happened to be white felt the need to send me to a cage and try to take my life for something that they knew that I didn't do.

Of course, they did take Ray Hinton's life. A false conviction isn't about lost time; it's the loss of an education, a marriage, the chance to start a family, settle into a job and build a pension. The only thing Alabama didn't take was the breath from his body.

Scott Pelley: Are you angry?

Ray Hinton: They took 30 years of my life, as you said. What joy I have I cannot-- afford to give that to 'em. And so being angry is-- would be giving them--letting them win.

Ray Hinton: Oh absolutely. I am a person that love to laugh. I love to see other people smile. And how can I smile when I'm full of hate. And so the 30 years that they got from me, I count today-- I count every day as a joy.