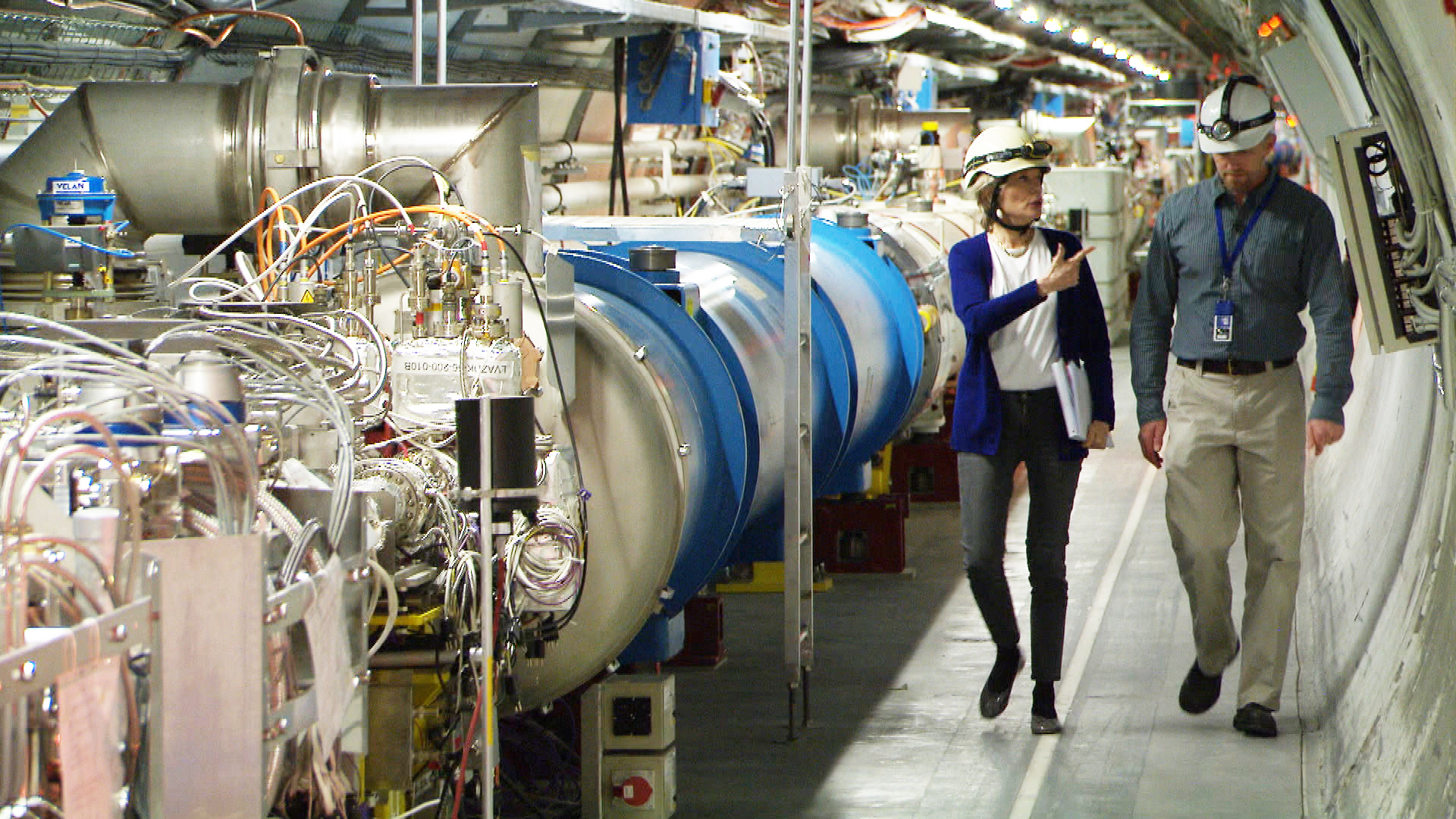 The following script is from “The Collider” which aired on Nov. 8, 2015, and was rebroadcast on Sept. 4, 2016. Lesley Stahl is the correspondent. Andy Court, Keith Sharman and Sarah Fitzpatrick, producers.

The Large Hadron Collider is one of the wonders of the modern world. It’s believed to be the largest and most complex machine mankind has ever created. Buried hundreds of feet beneath Switzerland and France, the Collider smashes subatomic particles together with enormous energy. By studying the collisions, scientists have already made a major discovery: the “Higgs boson,” some call it the “God Particle.” They’re now hoping to learn a lot more, because after two years of repairs and upgrades, the Collider is smashing particles at nearly double the power. As we first reported last fall, the things it’s searching for now sound like they’re straight out of science fiction.

Security is tight at the Large Hadron Collider. You need an Iris scan to get inside.

[Machine: Thank you, you have been identified.]

Lesley Stahl: Is this where the collision takes place?

Greg Rakness: The protons come down this pipe, down this orange pipe.

American physicist Greg Rakness showed us one of the four detectors where subatomic particles called protons ram into each other at nearly the speed of light to simulate conditions that are believed to have existed when the universe began.

Lesley Stahl: Is there a boom? Is there noise?

Greg Rakness: There’s no noise, but there’s a flash of light and the particles fly off. And you’re taking a look into the-- basically a microscopic view of the Big Bang.

This is what the inside of the detector looks like. It’s stuffed with magnets, electronics, and sensors. Creating a miniature version of the Big Bang isn’t easy. Before the particles get here, they travel through a long tunnel that Rakness took us down into during a maintenance break.

Lesley Stahl: In a big loop? A big circle.

The loop runs beneath the countryside of Switzerland and France, not far from Geneva. The tunnel is so vast workers zip around on bicycles. The particles zip through these pipes guided by super-cooled magnets.

Lesley Stahl: When the protons are going through the tunnel it’s very cold. How cold does it actually get?

Lesley Stahl: Is that colder than outer space?

Lesley Stahl: Oh, it is. Now, I hear when the collision takes place, that the temperatures spike. They go way high. How high do they go?

Greg Rakness: They can be up to the order of 10,000 times hotter than the center of the sun.

Lesley Stahl: So it goes from the coldest ever to the hottest ever.

The data is analyzed by thousands of computers here and around the world. This is what an image of the collisions looks like, with particles flying off in every direction.

By carefully analyzing the data from the collisions, scientists were able to find the Holy Grail of modern physics, a particle known as the “Higgs boson,” or just “the Higgs”. The Higgs gives all the other particles mass. Without it, molecules would not exist, trees, rocks, mountains would not exist. We would not exist.

Greg Rakness: There are collisions 40 million times per second.

“The Higgs” may have been found here, in the Collider in Switzerland, but it was conceived in Scotland by a person almost as hard to find as the particle itself. Peter Higgs doesn’t have much use for computers, email, or cellphones and doesn’t own a TV. In 1964, he was a junior professor at the University of Edinburgh when he came up with his theory. He was 35 at the time, and not taken seriously.

Peter Higgs: Not many people took much notice of this kind of theory at the time. They were doing other things, which was why it was left to a few people, a few eccentrics to do it.

Lesley Stahl: Did you use any machines or any special equipment?

Peter Higgs: A pencil and paper.

Lesley Stahl: And pencil and paper?

Lesley Stahl: That’s all you used?

Peter Higgs: Well, that’s all you need for writing equations--

Higgs’ simple and elegant equation gained credence over the years, but there was no machine powerful enough to put it to the test - until the Large Hadron Collider was built by the European Organization for Nuclear Research, known as CERN.

Lesley Stahl: Finally, the collider really did prove that you were right and, in 2012, I believe you were there at CERN.

Peter Higgs: I was there. I was more or less summoned. I was told in a message, “Tell Peter if he doesn’t come to CERN on July the 4th, he will probably regret it.”

He went to CERN. Along with hundreds of other physicists who assembled to hear whether the Collider had proved Higgs’ theory.

Greg Rakness: It was like the Olympics of particle physics. When they showed the money plot, the picture that made it clear that there was a bump which could be the Higgs boson, there was a gasp in the audience. Where everyone went, “Ah.” And it’s true, because it was absolutely clear that had to be something that we hadn’t seen before.

Dr. Rolf-Dieter Heuer: I think we have it [laughter], do you agree? [Applause]

In the audience, the one-time eccentric teared up. This guaranteed Peter Higgs a place in history.

Fabiola Gianotti: It was-- it was-- it’s hard to tell in words.

In January, Italian physicist Fabiola Gianotti became CERN’s first female director-general. She oversees the souped up $8 billion Collider that 10,000 scientists around the world work on as they search for new breakthroughs that could revolutionize society in ways that are hard to imagine.

Lesley Stahl: Is it possible that there’s-- and I read this in science fiction, that there’s a whole dimension-- a dimension that we don’t even know about?

Fabiola Gianotti: Absolutely. There are theories in part-- theory in particle physics that predicts the existence of additional dimensions. String theories, for instance, they require seven additional dimensions. So, as experimentalists we should, with our high-tech instruments like the Large Hadron Collider, just listen to nature and to what nature wants to tell us.

One of their biggest goals is shining a light on dark matter and dark energy which are among the great remaining mysteries of modern science and reminders of how little we know about the universe.

Fabiola Gianotti: When we look at the universe, what we see by eye or with our telescopes is only five percent of the universe. The rest, 95 percent is dark. Dark meaning, first of all, not visible to our instrument. Second, dark also indicates our ignorance. We don’t know what’s the composition of this part of the universe.

Lesley Stahl: If we don’t know what dark matter is, how do we even know there is such a thing?

Fabiola Gianotti: We have some indirect, but very strong experimental evidence of it. For instance, when we look at the gravitational movement of galaxies. These movements, they’re observed, cannot be explained with the amount of matter that we see.

Lesley Stahl: So, if there’s gravity there must be mass?

Fabiola Gianotti: Exactly. And the mass that we see is not able to explain the movement of the galaxies as we observe it.

Lesley Stahl: Is dark matter here? Right here, beside-- all around us? All this stuff we really can’t see?

Scientists are looking for signs of dark matter inside the collider. But they’ve also placed detectors deep in mineshafts and in space. A short walk from the Collider, Nobel Laureate Sam Ting and a team of scientists receive data from a $2 billion detector they have placed on the International Space Station.

Lesley Stahl: So we have now a detector that’s sitting on our space station to see if you can see dark matter? Is that what you’re hoping to do?

Sam Ting: To detect the trace of dark matter collisions.

Astronauts help keep an eye on the experiment.

Lesley Stahl: This is real time?

Half a century after he first proposed his theory, Peter Higgs received the 2013 Nobel Prize in Physics, along with Belgian Physicist Francois Englert. The many scientists who worked on the Collider made this day possible.

Among them, Steve Nahn, Laura Jeanty and Steve Goldfarb, three American physicists who have been working on the Collider for years.

[Steve Goldfarb: It mattered, it mattered...]

Goldfarb told us that he was amazed at how many people went online to watch the meeting at which the discovery was announced.

Steve Goldfarb: You know, one billion people by the end of that week had seen video from that webcast. So a significant portion of our planet was interested enough to watch something which was a very technical seminar.

Lesley Stahl: Why do you think it’s ignited so much public interest?

Laura Jeanty: I think ultimately what we’re doing has a lot of philosophical motivations. We’re interested in understanding how things work, and I think everybody connects to that idea. And everybody is interested when science pushes the boundary of our understanding.

Lesley Stahl: We’re now into season two with a much more powerful Collider. What are you going to look for now?

For instance, can they find something smaller than the quark, one of the smallest particles discovered thus far?

Steve Goldfarb: Is the quark it? We’ve thought many many times--

Lesley Stahl: You mean: is there something even smaller than a quark?

Lesley Stahl: At the moment we think not, but who knows--

Steve Goldfarb: We look all the time for that.

Laura Jeanty: We looked for black holes and we didn’t see them.

Lesley Stahl: Are you saying there are not black holes?

Laura Jeanty: So we were looking for micro black holes that would’ve been, for example, evidence that there are extra dimensions, but unfortunately it doesn’t look like we produced that at these energies.

Lesley Stahl: But does that mean there are no extra dimensions or that you just didn’t find any?

Laura Jeanty: We just didn’t find them. They still could be here.

Lesley Stahl: If you find a whole different dimension, will it allow us to change time?

Laura Jeanty: I think this is a difficult question because scientists don’t like to say that something is impossible.

Laura Jeanty: Even if we think it’s extremely unlikely--

Steve Nahn: That’s right. You know, if you had asked somebody in 1900, “Do you think we could take a device out of our pocket and push a button or two and talk to your spouse halfway across the world?”

Steve Nahn: They would-- they would the-- say the same thing. But we can do it today, right? So who’s to say, 100 years from now what we can or cannot do.

For the first time, Dick Cheney speaks frankly and in detail about the heart disease that plagued him during his political career