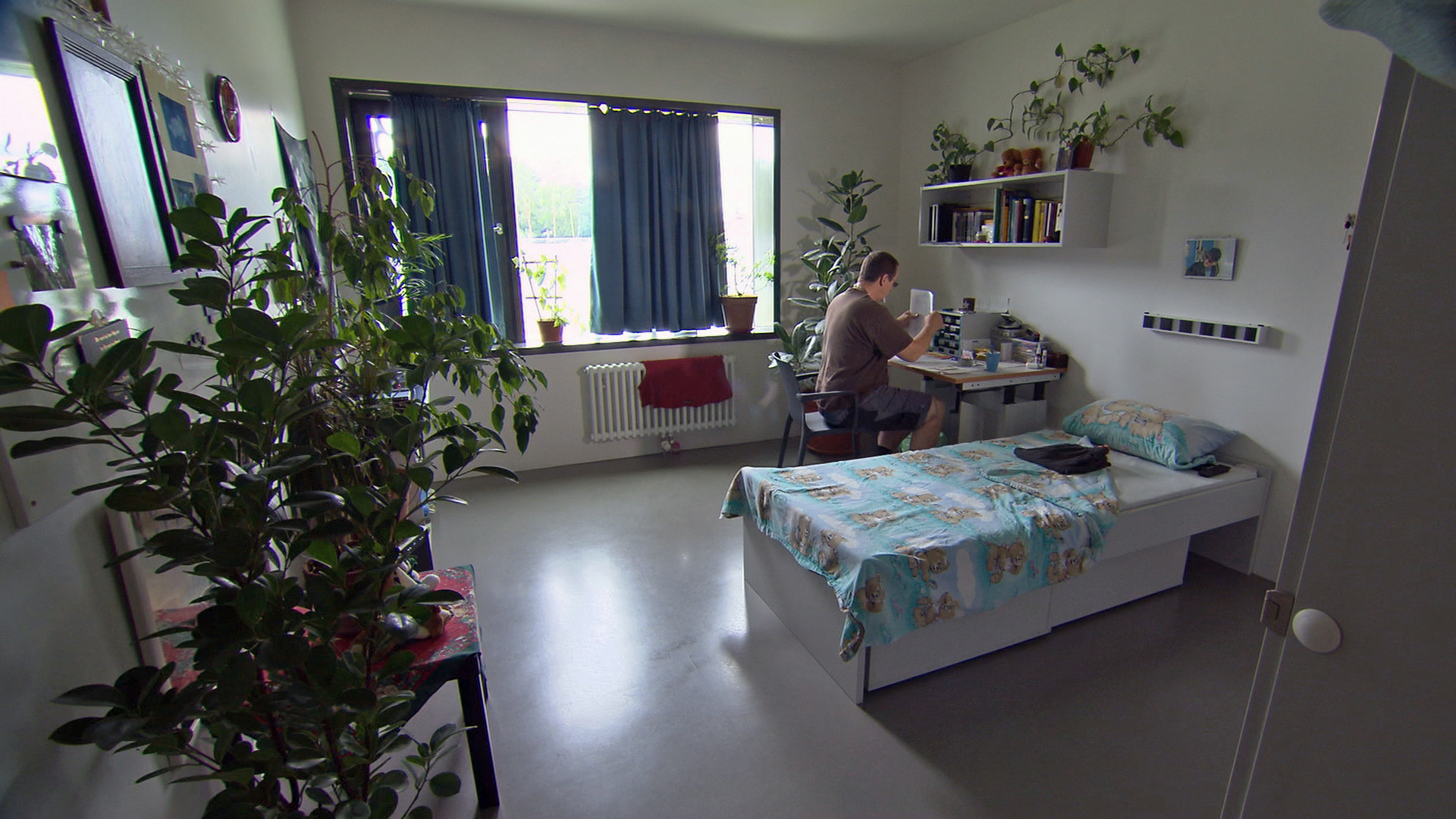 The following script is from "Crime and Punishment" which aired on April 3, 2016. Bill Whitaker is the correspondent. Marc Lieberman, producer.

Not many issues can unite Democrats and Republicans. But criminal justice reform is one of them. After 30 years of being Tough on Crime in the U.S., no other nation incarcerates more of its citizens than we do. We have five percent of the world's population, but 25 percent of its prisoners. The cost of housing all those inmates: $80 billion a year.

We found that American politicians and prison supervisors are looking for new ideas -- in Germany. The main objective of German prisons is rehabilitation, not retribution. Germany spends less money on prisons, but gets better results. Their recidivism rate is about half the U.S. rate. We wondered if Germany had found a key to prison reform. So we visited three German prisons, but our trip started in a small resort town about 100 miles north of Berlin.

When the weather's warm, the lakeside town of Waren, Germany, attracts families and tourists. We found Bernd Junge there with his sister and niece -- out for a stroll, eating ice cream sundaes -- an innocent scene if ever there was one. But Junge is a convicted murderer, currently serving a life sentence for a contract killing. He shot a woman to death in cold blood. We spoke with him by the lake.

Bernd Junge: Well this is about being reintegrated into a normal life and that means rehabilitation and all that, so for me, yes, this is part of it.

After 15 years in prison he's earned weekend leave for good behavior. He's on track for early release. In Germany, 75 percent of lifers are paroled after 20 years or less.

Joerg Jesse: If someone says to himself it's a German fairy tale, if he doesn't commit any crimes anymore after release, it's OK. He can think about his imprisonment, what he wants.

Joerg Jesse is a psychologist by training. He's now director of prisons in Mecklenburg-Western Pomerania, a state in north Germany along the Baltic, about the size of New Hampshire. There are rich fields here, brilliant sunsets, and Waldeck -- the maximum-security prison where Bernd Junge is serving time.

Bill Whitaker: Should he have a future for himself? He took a life.

Joerg Jesse: Yes, he should.

Bill Whitaker: He should?

Joerg Jesse: He should.

Jesse invited us to Waldeck to show us how the German system works.

Joerg Jesse: The real goal is reintegration into society, train them to find a different way to handle their situation outside, life without further crimes, life without creating new victims, things like that.

Bill Whitaker: Where does punishment come in?

Joerg Jesse: The incarceration, the imprisonment itself is punishment. The loss of freedom, that's it.

Bill Whitaker: I think Americans think crime and punishment. You say punishment is not even part of the goal of the German prison.

Bill Whitaker: At all?

Joerg Jesse: Not at all.

So life inside prison mirrors life outside as much as possible. Germans call it "normalization." It starts with small prison populations. Low-level offenders get fines or probation. Prison is reserved for the worst of the worst -- murderers, rapists, career criminals. We were surprised how quiet and peaceful it was inside Waldeck. We wondered where all the inmates were. It turns out they were relaxing outside on this sunny day.

Bill Whitaker: This is unbelievable. You're in for murder and you have a key to your cell.

Cells have doors, not bars. It's for privacy. Inmates can decorate as they please. We saw Joerg Muehlbach playing video games in his cell. He told us he was convicted of large-scale cocaine trafficking and gun possession. He's serving seven years.

Bill Whitaker: Compared to cells in the United States this is quite luxurious.

Joerg Muehlbach: Yes, it is comfortable here. As a prisoner here it's alright.

He says being separated from his family makes prison hard, not the conditions. He has a private bathroom and things that would give American prison guards the jitters.

Bill Whitaker: You have darts. You've got a letter opener. You have legs on the table that you could break off and use as a club. You've got quite a bit of freedom in here?

Joerg Muehlbach: Gosh, I haven't even thought about that. Here this is normal.

Muehlbach's day is normal too. He gets up and goes to work in the prison kitchen. After his shift, there's R&R -- darts in the common room, beach volleyball in the yard. There's a lot to do, he told us.

Joerg Muehlbach: Yes, painting and crochet. And in crochet we make hats, oven mitts, whatever you need.

We visited several German prisons and were amazed how laid back everybody seemed at each of them -- prisoners and guards. Heidering Prison outside Berlin is as clean and bright as a Google campus. The prison is surrounded by fences, not walls, so inmates can see the outside world. The prison uniform? Street clothes. For the inmate who finds this too stressful, there's yoga.

Bill Whitaker: This probably isn't the image that comes to mind when most Americans think of German prisons. That's likely to conjure up brutal images from World War II. But following that war, respect for the human dignity and freedom of all people was written into the German constitution. Privacy is sacrosanct. There is no death penalty.

At old facilities like Tegel in Berlin, or new ones like Heidering, the focus is on humane treatment and rehabilitation. Prison guards are key. They're well paid and highly trained -- they spend two years learning psychology, communication skills, conflict management. Jesse calls them "calm down" experts.

Bill Whitaker: How do you explain that?

Bill Whitaker: In fact, many of them are dangerous. We we're up there on a row where everyone you ask was in for murder, murder, murder.

Joerg Jesse: They're all human beings, and they know a violent manner. And we do exactly the other way around. "Don't be aggressive." Show them that there is a different kind of conversation possible.

The conversation starts right away. It's based on therapy. Psychologists make an initial assessment of all new inmates and devise personalized prison plans for them: recommendations for counseling, classes, vocational training and work. Inmates who follow the plan earn greater freedoms and early release.

Joerg Jesse: We cannot see the sense in just locking people up for their whole lives. Your prisons will fill up and you'll have to build new prisons and so on and I think that was the situation in the U.S.

With more than 2 million inmates in U.S. prisons, more Americans are coming to Germany seeking solutions.

[American tour: It's like a dorm. This would be a nice dorm room for the Ivy League.]

We joined U.S. prison and law enforcement officials on this tour in Berlin organized by the Vera Institute of Justice and John Jay College of Criminal Justice. Connecticut Governor Dannel Malloy was part of the group. He was impressed by what he saw.

Bill Whitaker: In the U.S., we've got much greater access to guns. We've got-- race as a factor and ethnicity as a factor. Are the things being done here directly transferrable to the United States?

Dan Malloy: I think there are many things that are transferrable. That doesn't mean that it's a perfect fit. But I think we have to challenge ourselves to do better.

Bill Whitaker: This doesn't have the same vibe, doesn't feel like the prisons in Germany at all.

John Wetzel is Pennsylvania's Secretary of Corrections. Three years ago, he went to Germany looking for ideas to improve his prisons. He showed us around Graterford, outside Philadelphia. It's the largest maximum-security prison in Pennsylvania -- 3,300 prisoners are packed in here. We were walking through an 80-year-old cell block when this inmate approached. He said he was a low level drug offender.

Prisoner: Sometimes, it be leaking on the block, people dying in their cells, the water stinks. Did you smell the water? Water smells like it's coming out of the sewer hole.

John Wetzel: You're preaching to the choir. I've done as much as I could for...

Prisoner: I mean, for real, there ain't nothin' but poor black and Latino people in the jail. It's bad in here man, its bad.

Wetzel started as a prison guard three decades ago. Back in 1980, there were 8,000 inmates in the state. Today, there are 50,000. Physical and sexual assaults are a fact of life. At Graterford, there are more than 700 lifers.

John Wetzel: Pennsylvania's a state where life means life. So, if you're doing life here you're not gonna be walking around a park-- eating sundaes with your family.

When Wetzel was in Germany, Joerg Jesse gave him a tour of Waldeck.

Bill Whitaker: You were skeptical.

John Wetzel: It almost sounded like Disneyland. "Oh, there's very few inmates. Inmates have their own keys and everybody gets along and everything's hunky-dory." I mean, who's buying that story? Not me.

By the end of his visit, Wetzel was buying it. He started implementing some of the things he saw in Germany, like more intensive staff training, greater freedom for inmates with good behavior and programs to help them reenter society.

Bill Whitkaer: We, the American public, called for tougher sentencing, throwing away the key. Are we there for this more lenient approach?

Sometimes Germans think their prisons are too lenient. But the system is mandated and protected by the country's highest court. There are problems. They have gangs. They have drugs. They've seen signs of Islamic radicalization. They try to counter it all with counseling.

But there are inmates deemed too dangerous to release. They wind up in something called preventive detention. At Berlin's Tegel prison we met Chris Templiner. He has spent the last 18 years not knowing when or if he'll ever get out.

Chris Templiner: They think I'm dangerous so what can I say? What can I show them? I don't know.

Bill Whitaker: You did bad things?

He wouldn't tell us his crimes and German privacy laws kept us from finding out. His life is confined to this well-appointed, apartment-like building. Look around, this is life in prison for Germany's worst offenders.

Bill Whitaker: You expect to be here until you die?

But convicted murderer Bernd Junge expects to get out in September. He stuck to his plan and earned the freedom to leave prison every day for work - a maintenance job at the nearby port.

Bill Whitaker: You could escape if you wanted to.

Bill Whitaker: But you don't?

Bill Whitaker: Why not?

Bernd Junge: Very simple. My time is almost over. And I want to be done with this chapter of my life, once and for all.

At Pennsylvania's Graterford prison, this is where murderers are housed - locked up 23 hours a day.

John Wetzel: I think more now than any time in the history of our country we have the right and left agree that we've-- frankly screwed up the corrections system for 30 years and it's time to do something different. It really starts with understanding that, you know, a human being's value isn't diminished by being incarcerated.

Bill Whitaker: What you're talking about requires a huge mind shift on the part of all of us.

John Wetzel: It's crossing the Grand Canyon is what we're talking about.