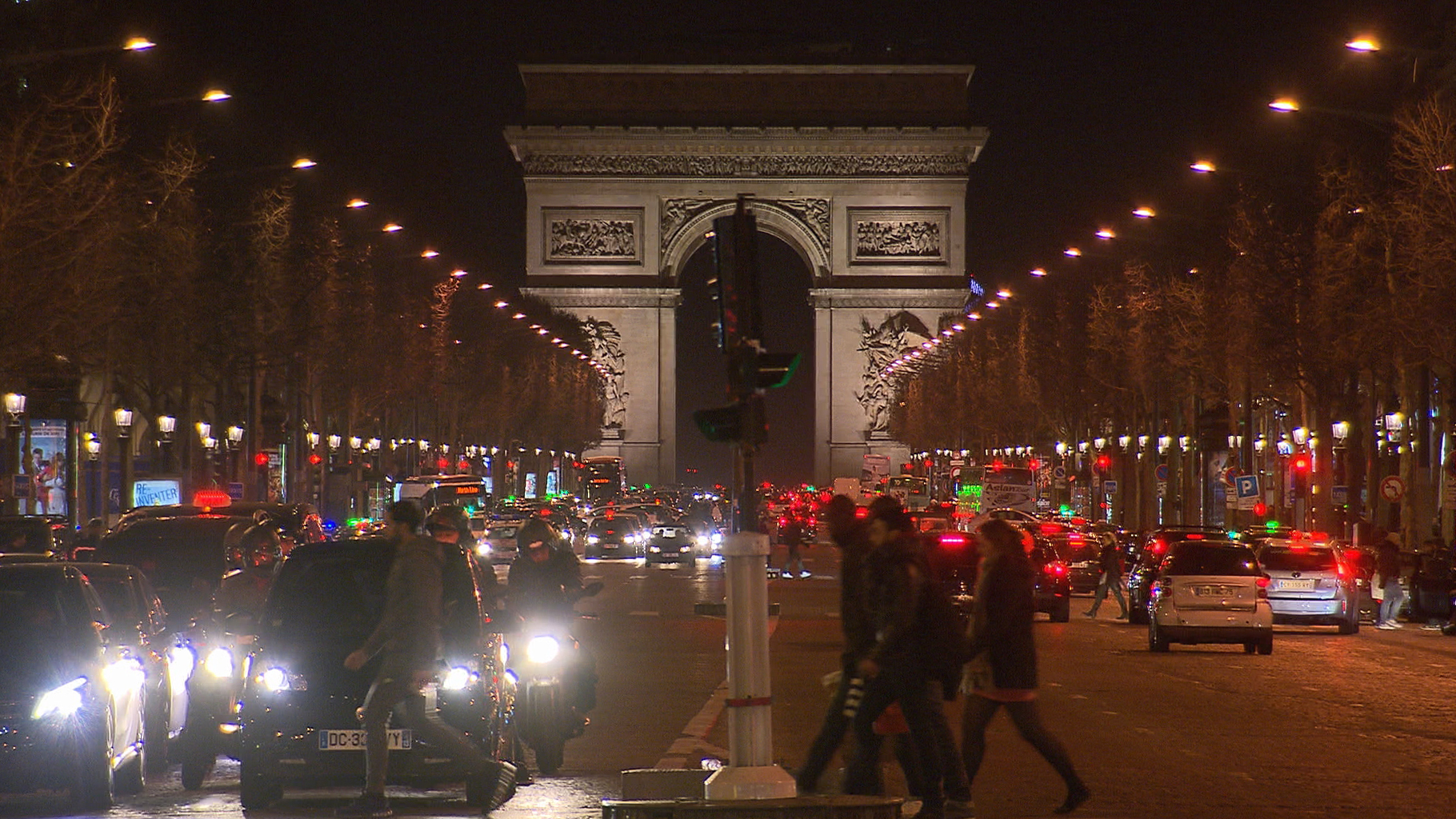 The following script is from "Encryption" which aired on March 13, 2016. Lesley Stahl is the correspondent. Shachar Bar-On, producer.

The argument over encryption between Apple and the FBI reminds us that the world is facing a far more tech-savvy terror threat. While not that long ago al Qaeda often handled its communications by going back to the Stone Age relying on mules and couriers, the Islamic State, or ISIS, proved it can be done with just a push of a button using everyday tools of 21st century teenagers: the latest smartphones and messaging apps.

The encryption debate centers around an iPhone found in San Bernardino, where 14 men and women were killed in a terror attack last December. But before that, there was the massacre in Paris. We went there to meet the city's chief prosecutor who is confronting some of the same issues.

Francois Molins: The terrorists are able to communicate with total impunity.

Francois Molins is the head prosecutor of Paris -- he's investigated all the big acts of terrorism here, including Charlie Hebdo, the kosher supermarket, and now the November 13 attacks where 130 people were killed, more than 350 wounded.

Lesley Stahl: Do you have phones in terrorist attacks that you have not been able to get into because of encryption?

Francois Molins: Oui oui. With all these encryption software programs, we can't penetrate into certain conversations and we're dealing with this gigantic black hole, a dark zone where there are just so many dangerous things going on.

It's not just phones. One of the things he's looking into is a texting app favored by ISIS called Telegram which, like the new Apple iPhone -- offers advanced encryption.

Lesley Stahl: How often have you run in, in all your investigations, into Telegram?

Francois Molins: Yes, very often. Telegram, we can't penetrate, we can't get into it.

Pavel Durov is the inventor of Telegram. He's a young man without a country. He's Russian born but wanders the world now, in exile. He created Telegram so he could communicate in complete secrecy. It has taken off, used by over 100 million people.

Lesley Stahl: But it's also used by terrorists now. Is this a concern for you?

Telegram has become a go-to site for ISIS. They use it to widely disseminate propaganda like this video of the Paris attackers training in Syria. But ISIS fighters can also use Telegram to send private messages to each other to covertly plan and coordinate attacks.

Lesley Stahl: Is there something on your site on Telegram that allows any messages, emails, to just disappear, vanish?

Pavel Durov: Yes. So in private messages we have this secret chat feature which provides you with a self-destruct timer.

Pavel Durov: You could set a specific amount of time, like a few seconds, or a minute or a week, after which the message would disappear.

Durov's obsession with secrecy and security stems from his own personal history. Long before Telegram he was known as the Mark Zuckerberg of Russia because he built a popular equivalent of Facebook. But in 2011, when anti-Putin marchers filled Moscow's streets, the Kremlin demanded he take down the organizers' sites.

Pavel Durov: And I refused to do that publicly. And the next day I had armed policemen at my doorstep...

Pavel Durov: ...and tried to break into my apartment.

There was continual pressure on him to hand over users' personal data culminating in 2014 when, under Kremlin duress, Durov was ousted from his own company.

Lesley Stahl: How long did you stay in Russia after that?

Pavel Durov: Not a single day.

Lesley Stahl: Oh, then you fled.

Pavel Durov: I certainly feel that I am not welcome at that country anymore.

That's when he created Telegram and encrypted it, he says, so activists could be assured that no government could ever access their personal data. He managed to leave Russia with a reported $300 million which he uses to singled-handedly fund Telegram, costing him, he says, over a million dollars a month.

Lesley Stahl: This was something that you created to allow democracy to flourish, to allow dissidents in Russia and in other countries to communicate with each other. And then all of a sudden you find out that this terrorist group uses your site for completely different reasons.

Pavel Durov: Yeah, we were horrified.

Lesley Stahl: There's an irony there.

Pavel Durov: There is. But you know there's little you can do because if you allow this tool to be used for good, there will always be some people who would misuse it.

Just hours after the terrorists hit Paris on the night of November 13, ISIS used Telegram to take credit for the attacks. It was a wake-up call for European authorities.

As head of Europol, Rob Wainwright gathers and analyzes information from over 600 law enforcement agencies. He has set up a new counter terrorism center to better coordinate all the intelligence.

Lesley Stahl: How much is encryption a problem generally in these investigations?

Rob Wainwright: In most of them. I mean, across the tens of thousands of investigations that Europol is supporting every year on terrorism and serious crime, at least three quarters of them have encryption at the heart of the challenge that law enforcement face.

Lesley Stahl: Now, what about the November 13th attack specifically?

Rob Wainwright: From what we see, encryption also played a role in that part and that's something that we we're digging into much deeper at the moment.

Lesley Stahl: Why is it still a mystery?

Rob Wainwright: It's not-- not so much of a mystery. It's not that I can share all the details about a very sensitive investigation in public.

We know that the ringleader of the attack, 28-year-old Abdelhamid Abaaoud, was a wanted fugitive who goaded authorities by bragging in this online ISIS magazine how easily he eluded them shuttling between Europe and Syria. He liked taking selfies of his exploits, often posting them online. In this gruesome video, he and his friends tie bodies to the back of a truck, Abaaoud in the driver's seat:

[Abdelhamid Abaaoud (translator): We used to tow jet skis - now we tow the infidels fighting us.]

Lesley Stahl: What is astonishing is that you knew who he was. He was on everybody's radar screen.

Francois Molins (translator): You're right. Abaaoud-- he has been one of the major targets for France and Belgium counterterrorism for many months.

Before Paris, Abaaoud was suspected of guiding European jihadis in attacks in France and Belgium, but the attempts were all foiled. In one of them an iPhone belonging to one of the jihadis was confiscated but it was not useful in finding Abaaoud, because it was encrypted.

Lesley Stahl: We've been told, and I want to confirm it, that the encrypted phone may have prevented you from getting information about the Paris attacks.

Francois Molins (translator): That's a theory that really needs to be looked into, but to do so, we really need to be able to get into that phone. You know, I say, all these smart phones make justice blind because they deprive us of a lot of information that could contribute to our investigations.

Abaaoud was on site in Paris on the night of November 13, coordinating three different teams over his phone: one group, at a soccer stadium, exploded their suicide vests outside. Abaaoud and two others went on a killing spree at bars and cafes... while a third team stormed a rock-concert at the Bataclan theater and started shooting.

Francois Molins (translator): I said to myself: "The thing that we'd been fearing was coming for months, was now happening."

The prosecutor rushed to the scene - first to the cafes where Abaaoud had already sprayed the sites with an assault rifle.

Francois Molins (translator): We know that he participated in the commando attacks at the cafes. Afterwards we see him in a video in the Paris subway. And we do believe that he went maybe just in front of the Bataclan.

The prosecutor also went from the cafes to the Bataclan. What he didn't know was that Abaaoud was outside the theater at the same time, amid throngs of police, standing there in his orange sneakers - apparently talking on the phone to the shooters inside. While police didn't spot him there, he was tracked down to an apartment in a Paris suburb five days later, and killed in a hail of gunfire and explosions.

In a stroke of luck police found a Samsung phone one of the attackers had tossed into a garbage can in front of the Bataclan, and it posed no encryption problems.

Francois Molins (translator): We were able to get information from phone communications that enabled us to retrace the terrorists movements: where they were, where they stayed, their itineraries.

Standard text messages were found on the phone including a final one saying, "Here we go. We're starting!" Also found, the app Telegram. It had been downloaded the day of the attack.

Lesley Stahl: But you personally don't know if the attackers actually communicated via Telegram to plot these coordinated attacks, or even if they used it during the attacks?

Pavel Durov: No, we have no information to prove that.

Lesley Stahl: Is there anything in your mind that says, "Gee, we have to have - to allow law enforcement to get in because what's going on is just unacceptable.

Pavel Durov: You know the interesting thing about encryption is that it cannot be secure just for some people.

Lesley Stahl: ISIS and other terrorist groups, they just push a button on an application like yours, specifically yours, an application... and it's gone around the world, like that.

Pavel Durov: Well again, this is the world of technology and it's impossible to stop them at this point. ISIS could come up with their own messaging solution within a month or so, if they wanted to because the--

Lesley Stahl: You mean create their own Telegram?

Since Paris, Durov has been purging ISIS propaganda from Telegram but says, if asked to unlock any private messages, he would tell the authorities that the encryption code makes it mathematically impossible, using a similar argument as Apple.

Lesley Stahl: So you're basically saying that even if you wanted to, your hands are tied.

Lesley Stahl: You can't do it.

Lesley Stahl: So this is one of the great debates of our time. Which is more important? Is it more important to shut down this kind of terrorism or preserve privacy?

Pavel Durov: I'm personally for the privacy side. But one thing that should be clear is that you cannot make just one exception for law enforcement without endangering private communications of hundreds of millions of people because encryption is either secure or not.

Lesley Stahl: The founder of Telegram has told us, he thinks privacy is more important than security issues, and he wouldn't open it up even if you did ask him.

Francois Molins (translator): Fine, that's his personal choice. But I consider that there are limits in all societies. There are limits to freedom and privacy. Freedom doesn't mean you can just do anything and everything you want. And there's a duty of institutions -- police and judicial -- to ensure security. You can't have freedom without security.