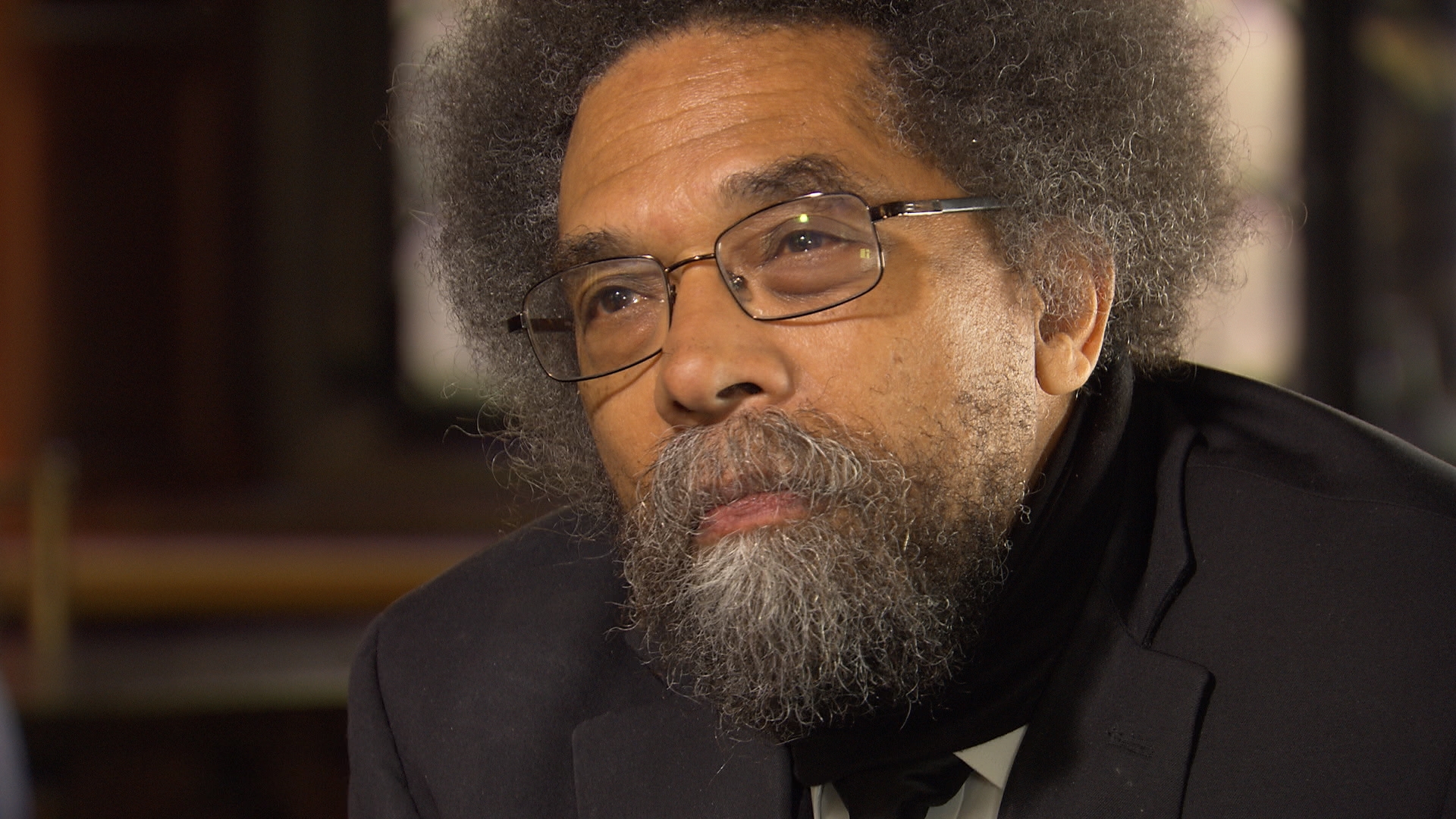 The following is a script from "Cornel West" which aired on March 20, 2016. James Brown is the correspondent. Alvin Patrick, producer.

Cornel West is a different kind of civil rights leader. His below-the-radar presence at racial flash points across America recently, stands in stark contrast to many of the more traditional civil rights leaders and their bright light press conferences.

Some of the new generation of African-American activists seem to be gravitating towards West, a charismatic academic scholar who doesn't lead an organization or have an entourage.

Cornel West has a message about how poor and disadvantaged Americans are being treated today and he can be searingly provocative on matters of race, never more so than when he criticizes President Obama.

Cornel West: When I call the president a black puppet of Wall Street, I was really talking about the degree to which Wall Street had a disproportionate amount of influence on his policies as opposed to poor people and working people.

James Brown: Why use such harsh language with-- showing no respect for the office of the president?

Cornel West: I tend to be one who just speaks from my soul, and so what comes out sometimes is rather harsh. In that sense I'm very much a part of the tradition of a Frederick Douglass or a Malcolm X who used hyperbolic language at times to bring attention to the state of emergency. So all of that rage and righteous indignation can lead one not to speak politely sometimes.

Eight years ago, Cornel West was a fervent supporter of candidate Barack Obama. Today, he blames the president for not doing more on issues like income inequality and racial justice. A product of the turbulent sixties, West has joined protests led by civil rights groups like Black Lives Matter. Here in Ferguson, Missouri, he was one of many arrested for civil disobedience.

James Brown: The young people who are leading the Black Lives Matter charge, you're all behind them?

James Brown: Why do you think you have that kind of currency with young people?

Cornel West: They know that I take their precious lives seriously. When I go to jail in Ferguson and say quite explicitly, "I'm old school, and I want the new school to know that some of us old folk love y'all to death" and they hear that and say, "Well, dang, you know, we might not always-- agree with this brother, but this Negro looks like a fighter for justice."

Nyle Fort: I think a lot of young people really gravitate towards him not only because he's a giant of an intellectual, he is somebody that you want to be around.

Nyle Fort is a 26-year-old activist and religion PhD student at Princeton. He first saw West speak at a rally four years ago.

James Brown: The manner in which Dr. West has been criticizing the president. Your reaction?

Nyle Fort: I think it's important for us to listen to the substance of his argument. And I think that his critiques not just of President Obama, but of our current state of democracy in this country, the current state of the world, is something that we need to pay attention to.

A favorite on the lecture circuit, we were with him at Marist College in Poughkeepsie, New York, when the crowd of 1,500 broke into applause before he said a word.

Then, for more than an hour, an extemporaneous journey filled with biblical passages and quotes from philosophers and poets about decency and virtue. All in support of West's warning about the dangers of inequality.

Cornel West: I have nothing against rich brothers and sisters. Pray for 'em every day. But callousness and indifference, greed and avarice is something that's shot through all of us.

Cornel West was born 62 years ago in Oklahoma, but grew up in Glen Elder -- a predominantly black neighborhood near Sacramento, California. He is the second of four children. His father, Clifton was a federal administrator and his mother, Irene was a teacher. They were a close-knit, church-going family.

Cornel West: I feel as if I have been blessed to undergo a transformation from gangster to redeemed sinner with gangster proclivities.

James Brown: You actually were a thug when you were a youngster?

Cornel West: Oh absolutely, I got kicked out of school when I was seven-- seven years old.

Cornel West: I refused to salute the flag because my great uncle had been lynched with the flag wrapped around his body. So I went back to Sacramento and said, "I'm not saluting the flag." And teacher went at me and hit me, and I hit back. And then we had a Joe Frazier/Muhammad Ali moment right there in the third grade.

Clifton West: He was the only student I ever knew that came home with all As and had to get a whipping.

"I feel as if I have been blessed to undergo a transformation from gangster to redeemed sinner with gangster proclivities."

Clifton West is Cornel's brother, best friend and was his role model growing up. He says behind his little brother's bad behavior, was a relentlessly curious mind.

Clifton West: We had this bookmobile. And we would come out, and check out a book, and go on back in the house and start reading it. So Corn, at one point, I don't know how long it took, he had read every book in the bookmobile.

Clifton West: I don't know it had to be 200 books, easy. And the bookmobile man, who was a white guy, went to all the neighborhoods, little chocolate neighborhoods, saying, "There's this guy in Glen Elder that read every book in here."

Anecdotes like that convinced teachers to give their troubled student an aptitude test. West's recorded IQ: 168.

Cornel West: I got a pretty high score. So they sent me over all the way on the other side of town. Mom used to drive me all the way to school and then drive back to her school where she was teaching first grade.

The new school had a gifted program that challenged his mind and changed his behavior.

James Brown: Was that when you first grabbed hold of the notion that you were smart?

Cornel West: You know, I never really thought I was that smart. Because there was so many other folk in school that I was deeply impressed by. But I'll say this, though, that I've never really been impressed by smartness.

Harvard University accepted Cornel West in 1970 which is where I first met him. We shared a suite with four other students and 46 years later, he still delights in maintaining his 70s afro.

Cornel West: This is Ohio Players, Charles Wright & Watts 103rd Street Rhythm Band. What you talking about, brother? Always, ever ready, ever ready.

James Brown: Doc, you still have your pie rake?

Cornel West: Ever ready. I go to jail with this thing.

James Brown: So when you go through security at the airport and you pull it out, what-- what do they say?

Cornel West: I gotta explain it to 'em. I'm not gonna hurt nobody. I'm just taking care of my fro. Absolutely.

He taught in the religion and African-American studies departments at Harvard and Princeton. West authored 22 books in 30 years.

Eddie Glaude: You can get lost in the expansiveness of Cornel's intellect.

Eddie Glaude is chair of African-American studies at Princeton. As a grad student, he remembers helping West fact check one of his books.

Eddie Glaude: He was doing all the footnotes by memory. So--

Eddie Glaude: Yeah, he was doing all the--

Eddie Glaude: --footnotes by memory. Right. And, so he asked me to go get a book, 'cause he wanted to check a footnote. And so I went to the library and I got the book and I brought the book to him. And he kept looking at the book and he was confused. He turned to the page. He couldn't find-- turned it over. "Oh, it's the wrong edition."

Eddie Glaude: The wrong edition. I went and got the right edition. Turned to the page. There it all was.

In 1993, West wrote his seminal book "Race Matters," a provocative examination of how race affects the lives of Americans -- just as the country was transfixed by the Rodney King trial.

The book catapulted him on to the national stage and into popular culture. So how much does race still matter, 20 years on?

James Brown: What's the current state of race in America in your mind, Dr. West?

Cornel West: We're in bad shape. We're in bad shape. For the upper-middle classes, we've got unprecedented opportunities and we deserve those opportunities. We've worked very hard. Our people sacrificed to make sure those opportunities were available. But poor black, brown, red people are catching so much hell on every level-- education, job market, mass media, family's weak, communities shot through with too many guns and drugs. We acted as if we could evade it and avoid it. That's what Barack Obama did for the first six years. He held it at arm's length. And of course what happened? You end up with a Black Lives Matter movement under a black president. What does that say? Now that doesn't mean that the president oughta take full responsibility for the race question. No, we got 400 years of this. But you have to be willing to be courageous and be unafraid to hit it head on.

West says he gave 65 campaign speeches for Mr. Obama in 2008 but their relationship changed drastically after his criticism started.

James Brown: When's the last time you've been in contact with the White House?

Cornel West: Oh, I have no contact with the White House at all.

The White House confirmed that but declined to comment further for this story. Allies of the president have criticized West - claiming his ego suffered by not being invited into the president's inner circle eight years ago.

James Brown: There are those who see it as more of a personal spat. Some even superficially said, "Well, wait a minute. How could Dr. West break ranks with the president of the United States?" Is it simply a matter of he-- you didn't get tickets to the inauguration?

Cornel West: Right. No, no. Every speech that I gave, all 65 speeches, I said, "I'm gonna do all I can to push my dear brother, Barack Obama and his precious family, into the White House. The day he wins, I will break dance in the evening. The next morning I will be his major critic because I'm critical of the system." So I told folk, I said, "I'm gonna be the major critic of the president after he wins."

[Furman: Professor West and I occasionally will say something, I know you're going to be shocked, controversial.]

We found West to be as passionate a listener as he is a speaker. Watch him here in South Carolina, sharing the stage with conservative Robert George or in class with his students at Union Theological Seminary in New York. Rather than needing to lead every important conversation, Cornel West prefers to be a part of them.

Cornel West: I think human history for the most part has been a cycle of hatred and revenge and indifference and callousness to the weak and vulnerable. But we're experiencing an awakening. That's what happens in America. Right when America's about to go under, you get a spiritual and moral awakening.