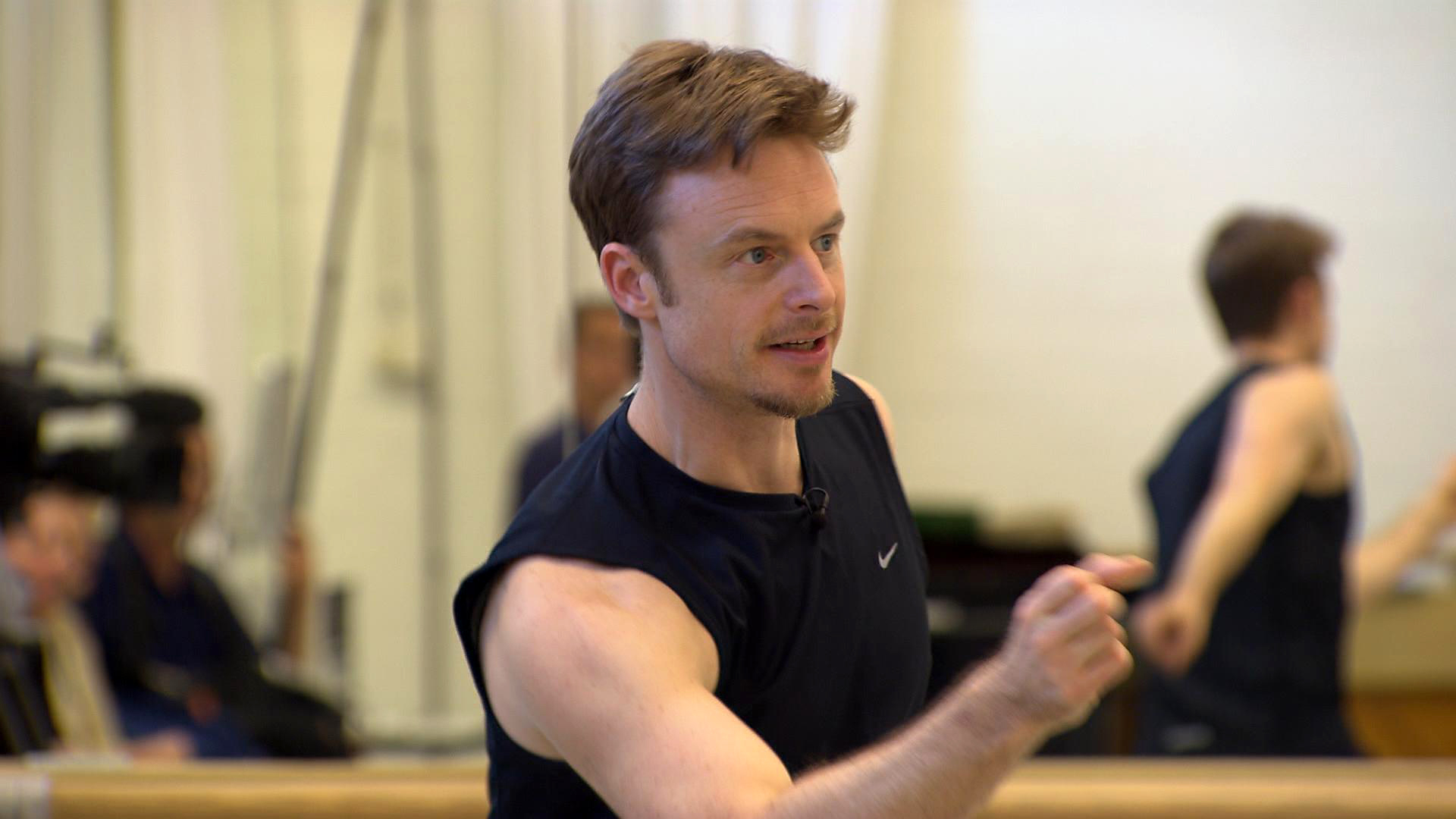 The following script is from "Christopher Wheeldon" which aired on April 3, 2016. Lesley Stahl is the correspondent. Ruth Streeter and Kaylee Tully, producers.

Christopher Wheeldon is one of the most celebrated choreographers in the world today; turning the tradition-bound dance form into something athletic, sensual and edgy.

Wheeldon was born in England and trained at The Royal Ballet where he is artistic associate. He's only 43, but has already created over 90 works, many for the world's major ballet companies.

Last spring, he pulled off a coup only a very few dance-makers have ever done: he directed and choreographed a smash Broadway musical. It was inspired by The Gene Kelly movie "An American In Paris," with music by George and Ira Gershwin. It received 12 Tony nominations and proved that Wheeldon can make ballet fun to watch, even for people who think they'll hate it.

"An American in Paris" is a love story. It's also a valentine to dance, all kinds: Broadway hoofing, tap and above all: ballet. Sensual, dazzling, daring ballet. Not only did Christopher Wheeldon choreograph the show, he also directed it, something he'd never done before, and that was scary.

Lesley Stahl: You gave new meaning to the expression, "Learn on the job"?

Lesley Stahl: For sure.

Christopher Wheeldon: In at the deep end.

Lesley Stahl: Because you had never directed anything with words?

Christopher Wheeldon: They probably couldn't see the sweat kind of trickling down the back of my neck.

It didn't hurt that he had music by the Gershwins to work with. He started with what he knew best: the dancing and ballet dancers, Robbie Fairchild and Leanne Cope. For Wheeldon, learning on the job turned out pretty OK. The show is a big hit and he won a Tony for best choreography.

Lesley Stahl: The critics just loved the show. Was it a turning point in your life?

Christopher Wheeldon: I certainly felt like a door was flung open.

For now, Wheeldon is taking what he learned from Broadway back into his first and abiding love, classical ballet, which he discovered as a little boy growing up in a small village in the South West of England.

When he was seven, he talked his parents into letting him take ballet lessons.

Christopher Wheeldon: I was hooked from the get-go.

Lesley Stahl: What was the get-go?

Christopher Wheeldon: The get-go was a little ballet school in a village hall and a bunch of girls around the barres on the side of the hall and it was the first place that I felt really at home.

At 10, he auditioned and was accepted at The Royal Ballet School known as White Lodge, a boarding school in London's Richmond Park -- originally the hunting lodge for the royal family. Up to then, he had kept his dancing a secret from his classmates.

Christopher Wheeldon: I went to an all-boys prep school and my headmaster was so proud that one of his students had been accepted into this big institution that he announced it in school assembly one morning. And I still had about six months to go at the school. So my secret was out and it was b-- it was a pretty-- it was a pretty hellish six months.

Lesley Stahl: They did tease you.

Christopher Wheeldon: I was teased, yeah.

Wheeldon lived at White Lodge between the ages of 11 and 16. It was competitive and grueling. Students here spend 4-to-5 hours a day dancing, and have to re-audition every year. In his time, Wheeldon was taught by a tough, old-school Russian ballet master.

Christopher Wheeldon: He was strict with us. He picked me up by my hair once 'cause I wasn't jumping high enough. It was-- I don't think I'll ever forget that.

Lesley Stahl: Did you ever want to quit?

Christopher Wheeldon: I don't think so. I really do feel that I was meant to be a dancer and I knew that.

Actually, he was meant to be a choreographer. But first he danced for The Royal Ballet and then the New York City Ballet which asked him at the age of 28, to become its first resident choreographer. He won acclaim making pieces that pushed the boundaries of classical dance, like this, "After The Rain," performed here to commemorate the attacks of September 11th.

Lesley Stahl: You have said that's your favorite. Tell us why.

Christopher Wheeldon: People love it. You know, I'm not gonna lie: It's a n-- it's a good feeling when people love your work and they tell you, and they're-- and they're moved by it.

Moving people has made Christopher Wheeldon an international superstar. Every major ballet company is after him. We followed him to Amsterdam where he was creating a brand new piece for the Dutch National Ballet.

Christopher Wheeldon: This room is a blank canvas, and you come in here with the bodies and with the beginnings of a new score, and you have no idea whether it's going to flower or sort of wither away. And--

Christopher Wheeldon: It is. But it's exhilarating.

Lesley Stahl: Where do you start?

Christopher Wheeldon: It begins with the music. And then it's about making that first brushstroke.

Lesley Stahl: When you're choreographing 'cause we've now seen you do it a couple of times, you close your eyes, you kinda go away. And when you're away your hands are moving as if we're actually watching that creativity happen. We're seeing you do it.

Christopher Wheeldon: It's a way of trying to picture the music. The shape of a musical phrase, whether it's something that's a spiral, or circular or angular.

Anna Tsygankova: It's magic to be with him in his studio, to witness how he makes this idea seated in his mind and his heart, he makes it visible for the rest of us.

Wheeldon is making his magic with Jozef Varga and Anna Tsygankova, a Russian-born star of The Dutch Ballet. He calls her one of his muses.

Lesley Stahl: When you're choreographing for a ballerina you almost take on-- you become her in a funny way.

Lesley Stahl: So you're an actor?

Christopher Wheeldon: Nobody actually pays to see me up onstage, but I do get to perform.

Lesley Stahl: You are pushing the dancers to do athletic things that go across the boundary almost.

Christopher Wheeldon: Dancers love to be challenged and we come up with crazy ideas sometimes just to see how far we-- we can push. And I will push until I'm sure that it's not possible.

Once in performance, it looks fluid and effortless. Wheeldon's reputation has been built on intimate duets like this with difficult but beautiful lifts and partnering.

For Wheeldon it's nonstop. Between May and September, he worked in seven different countries. In Toronto, he rehearsed his two-and-a-half-hour imagining of Shakespeare's "The Winter's Tale"for the National Ballet of Canada.

This is one of his story ballets with characters and a plot -- that are big box office. It has lots of moving parts, 52 dancers including children, and Wheeldon is the ring master.

"It is possible for ballet to be young, sexy, dynamic, exciting. To tell complex stories, not just stories about sleeping princesses."

Christopher Wheeldon: There are so many aspects that are kind of, you know, bearing down on you. The dancers are looking to you. There's a lot of expectation. They want a fabulous role so that they can be celebrated. The director of the company wants you to make a hit ballet. So there's a lot of responsibility that goes with the job.

And a lot of pressure. Which got to him early in his career as a choreographer when he was working in London.

Christopher Wheeldon: I had been working on a lot of ballets back-to-back. And I started work on a new piece. And I just felt I couldn't do it. There was nothing. It was kind of like suddenly switching all the lights off. So rather than facing it head-on I actually kinda turned and ran.

Christopher Wheeldon: I got on the plane and I flew back to New York. It was a really, really tough moment.

Lesley Stahl: What do you think you learned?

With the exception of a rough time running a ballet company he co-founded then left, he's been on a creative up ever since.

Happily married for two and a half years, Christopher Wheeldon's become an ambassador for ballet bringing it into the mainstream, this time with Stephen Colbert, showing him some moves from "An American in Paris."

Lesley Stahl: You once said that you wanted to show that ballet need not be, quote, "A big, puffy, pink, glittery nightmare." This is your ambition, to change that, that image?

Christopher Wheeldon: You know, it is possible for ballet to be young, sexy, dynamic, exciting. To tell complex stories, not just stories about sleeping princesses. But to take audiences on breathtaking journeys.