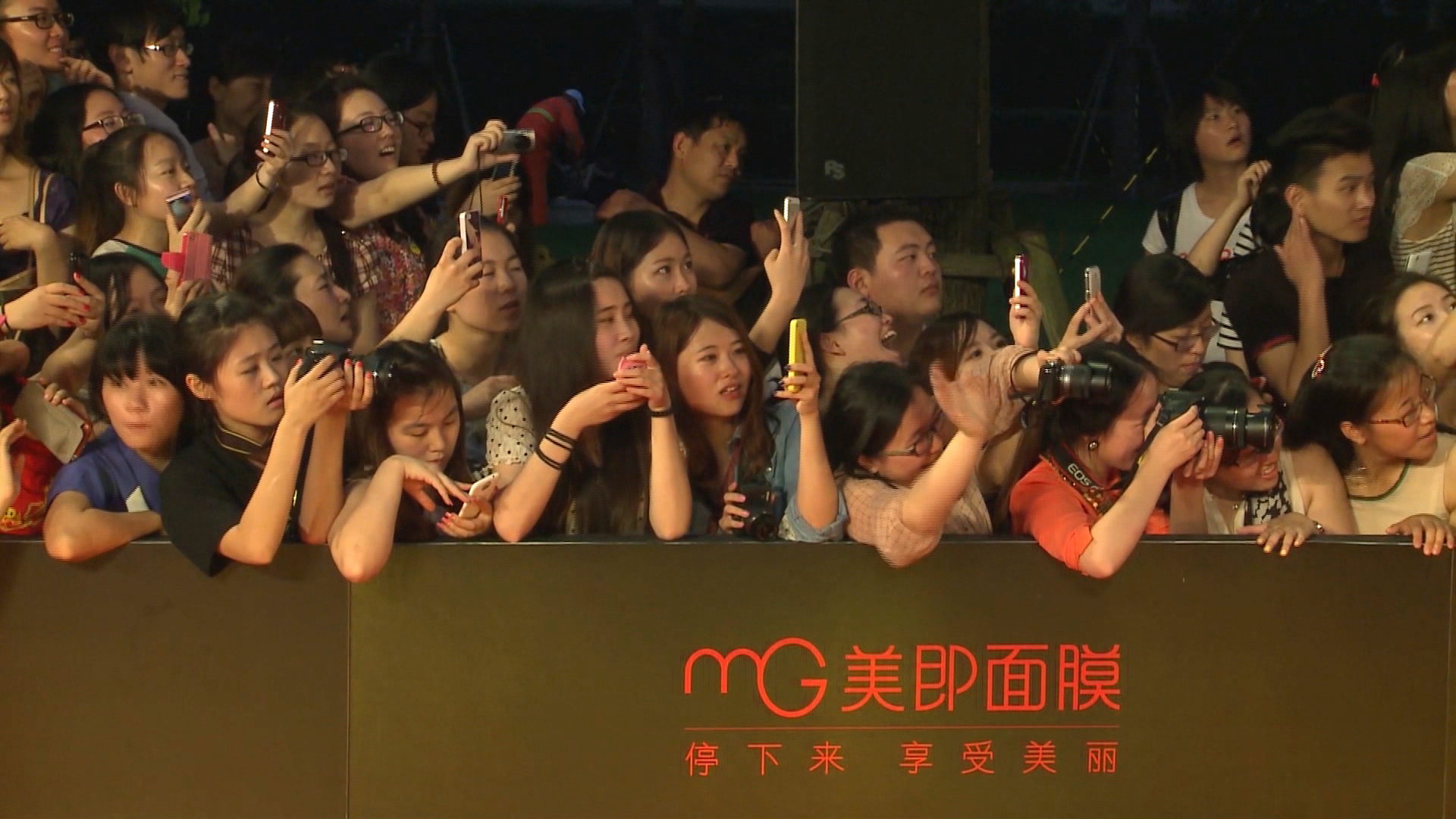 The following script is from "Rising in the East" which aired on April 10, 2016. Holly Williams is the correspondent. Michael Gavshon and David Levine, producers.

The Chinese economy is in trouble plagued by slowing growth and uncertainty in the stock markets. But there's one industry that isn't suffering: the movie business. In February, the Chinese box office brought in over a billion dollars for the first time ever, beating the U.S. and Canada. China, with its 1.3 billion people, is expected to become the biggest movie market in the world as early as next year. Hollywood has taken notice, partnering with Chinese studios and making blockbusters as much for Chinese audiences as American ones. But the U.S. film industry is also facing competition from Chinese moguls and movie stars with big ambitions. Tonight, a journey to a new Hollywood, rising in the East.

In the remote hills of Eastern China, this is a magic kingdom that not even Walt Disney could have dreamed up. It's called Hengdian World Studios and at over 7,000 acres, it's the largest film lot on the planet.

A palace for every dynasty, a village for every era, where some of the biggest movies in China have been filmed over the last two decades. These sets aren't flimsy facades but full-scale brick and mortar replicas of China's imperial past.

And when the films wrap, a brief silence before the sets are flooded by 15 million tourists who visit every year. It's all the domain of Xu Wenrong, a one-time farmer who realized his fields were fertile ground for a new industry.

Permission is hardly ever granted to film in the real Forbidden City, China's iconic landmark, so he built his own.

Holly Williams: And you made the whole thing from cement?

Xu got the idea for this place 20 years ago after a visit to Hollywood. Movies weren't big business in China back then, but he spent a billion dollars gambling on their growth.

Holly Williams: Do you feel a bit like an emperor when you come here?

Holly Williams: No, you're just an ordinary guy...

An ordinary guy whose empire hosts 30 different productions every day. As the film crews compete for space with tourists, who crowd the sets straining to get a glimpse of the stars.

The movie business is booming across China. Shopping malls have popped up everywhere, and with them, theaters. Twenty-two new movie screens open every day, that's right, every day. In the last five years, box office receipts have grown a staggering 350 per cent!

It's created a kind of a mass hysteria and something China's never seen before: star culture. Li Bingbing has been described as China's Angelina Jolie.

Holly Williams: It feels as if the movie industry here in China is getting more and more like Hollywood.

Li Bingbing: The speed of the development, you can't imagine, even for us.

Holly Williams: It's changing so quickly.

Li Bingbing: So quickly. You--

Li Bingbing: --even you don't even react, it's already changed.

Behind them is a group of pioneering movie moguls like Dennis Wang. He once worked as a Chinese food deliveryman in New York and is now chairman of the Huayi Bros, one of the largest studios in the country. The movie business has made him a billionaire, a capitalist with Chinese characteristics. Last year, he spent $30 million on a Picasso which he keeps in his pocket and in one of his other homes.

Holly Williams: So that's the Picasso and you bought it from the Goldwyn family, who owned the MGM studios in Hollywood?

The biggest prize isn't Picassos, but Hollywood itself. This year, a Chinese company purchased a Hollywood studio for $3.5 billion, others have been investing in multi-movie production deals with American companies to make films for the global market.

Holly Williams: --to make English-language films to compete with Hollywood?

Holly Williams: In five years you'll be competing with Hollywood.

Dennis Wang: I think we can do it.

Even though China's economy has slumped in the last year... Dennis' brother James, the Huayi Bros CEO, says the movie business is recession-proof.

James Wang: When the economy is weak, the movie business does really well. When times are bad, people go to the movies and feel happy and it doesn't cost them much money.

Holly Williams: So the bad times, actually could be good for the film industry?

James Wang: In the last 20 years, the biggest box office earners have come out when the economy is bad. It's interesting.

The sheer size of the Chinese market has Hollywood salivating and desperate to get in on the action. Dede Nickerson is an American film producer who's spent the last 20 years making movies in China.

Dede Nickerson: Well, they have to.

Dede Nickerson: They-- they have to because oftentimes the Chinese box office is larger than the U.S. box office. Especially for the big blockbuster films.

[Transformers: Whoever they are, there remains a price on my head.]

Blockbusters like Transformers 4, which made $300 million in China, was partly filmed there and co-stars Li Bingbing.

But the Chinese government has a quota system, which only allows 34 foreign films into the country every year. To get around the rule, Hollywood has been co-producing movies in China with local studios.

Kung Fu Panda 3 was animated in California and Shanghai at the SAME time and co-produced by DreamWorks and its spinoff, Oriental DreamWorks. CEO James Fong showed us how they were tailoring the movie for both audiences.

James Fong: What we've done is actually we are re-animating everything around the mouth and the throat so when you look at a Chinese version of the movie you no longer have a misalignment between the voices and the lip movement

Holly Williams: So in the Chinese version they look as if they are speaking in Chinese.

Holly Williams: Whereas in the U.S. version they look as if they're speaking English. Has this ever been done before?

James Fong: This has never been done before?

For years, the only movies anyone could watch in China were communist propaganda, revolutionary heroes, patriotic peasants and guerilla soldiers. Those who strayed too far from the party line were thrown in jail, or worse.

As a teenager filmmaker, Chen Kaige was pressured to denounce his own father, also a director, as an enemy of the state.

Holly Williams: But you were forced to do that by the political situation in China. You were only 14 years old.

In the 90s, after things had loosened up, Chen chose to make films that were critical of the regime like "Farewell My Concubine," which earned two Oscar nominations and tells the story of opera singers who are persecuted by Communist henchmen.

That movie helped put Chinese film on the map, but today, Chen, one of China's most venerated filmmakers finds it hard to keep up.

Chen Kaige: That's totally understandable. You know, they don't give a s**t. They just say, "Hey, we're here to watch a movie."

They're a generation that's grown up on China's booming consumer culture -- and on the surface their lifestyles look more and more like young peoples' in the West.

Prosperity has transformed China. It's no longer a closed Communist country. But amidst all this modernity the Chinese government still censors films and decides which ones can be shown in theatres. We asked to speak with the government officials who oversee the film industry here but they declined to be interviewed. Some things haven't changed.

It's not easy filming anything in China...those were just private security guards, but when it comes to making movies, the government's involved in almost every step of the process from deciding which movies get made, to screening the final cut.

Censors held up this World War II epic, "City of Life and Death" for the better part of a year because the film depicted soldiers from Japan, China's wartime enemy, in a flattering light. Lu Chuan was its director.

Lu Chuan: Because some-- some newspaper does-- put me as a traitor of--

Holly Williams: Because you dared to show a Japanese soldier as a human being?

He wasn't certain his latest film, a monster movie, "Chronicles of the Ghostly Tribe," would fare any better even though it has nothing to do with politics.

Three years ago the government didn't allow monster movies. Today it does. Navigating the whims of the censors can be treacherous and confusing.

Lu Chuan: They will determine the fate of your movie, you know?

Holly Williams: And can you argue with them?

Holly Williams: Does it work?

Lu Chuan: Sometimes. But you have to compromise.

Hollywood's been compromising to please the censors too, cutting whole sections out of films before they're released in China. Like scenes depicting Chinese bad guys in Men in Black 3.

[Men in Black: You arrest me, that's a hate crime.]

But Dede Nickerson, the China-based American producer, thinks U.S. studios are learning how to avoid that kind of meddling by the government.

Dede Nickerson: You'll see less and less of that because China is so important to Hollywood that I would say that those decisions are going to get made when a film is being green lit to be careful about what may be offensive to Chinese people or to the Chinese authorities. Because--

Holly Williams: So they won't need to cut scenes.

Dede Nickerson: They won't need to cut because--

Holly Williams: They just won't make them in--

Dede Nickerson: --they won't make them in the first place.

Self-censorship is the cost of doing business in China and a price U.S. studios are willing to pay. But Hollywood's biggest challenge isn't Chinese government interference. It's competition from a young and dynamic industry.