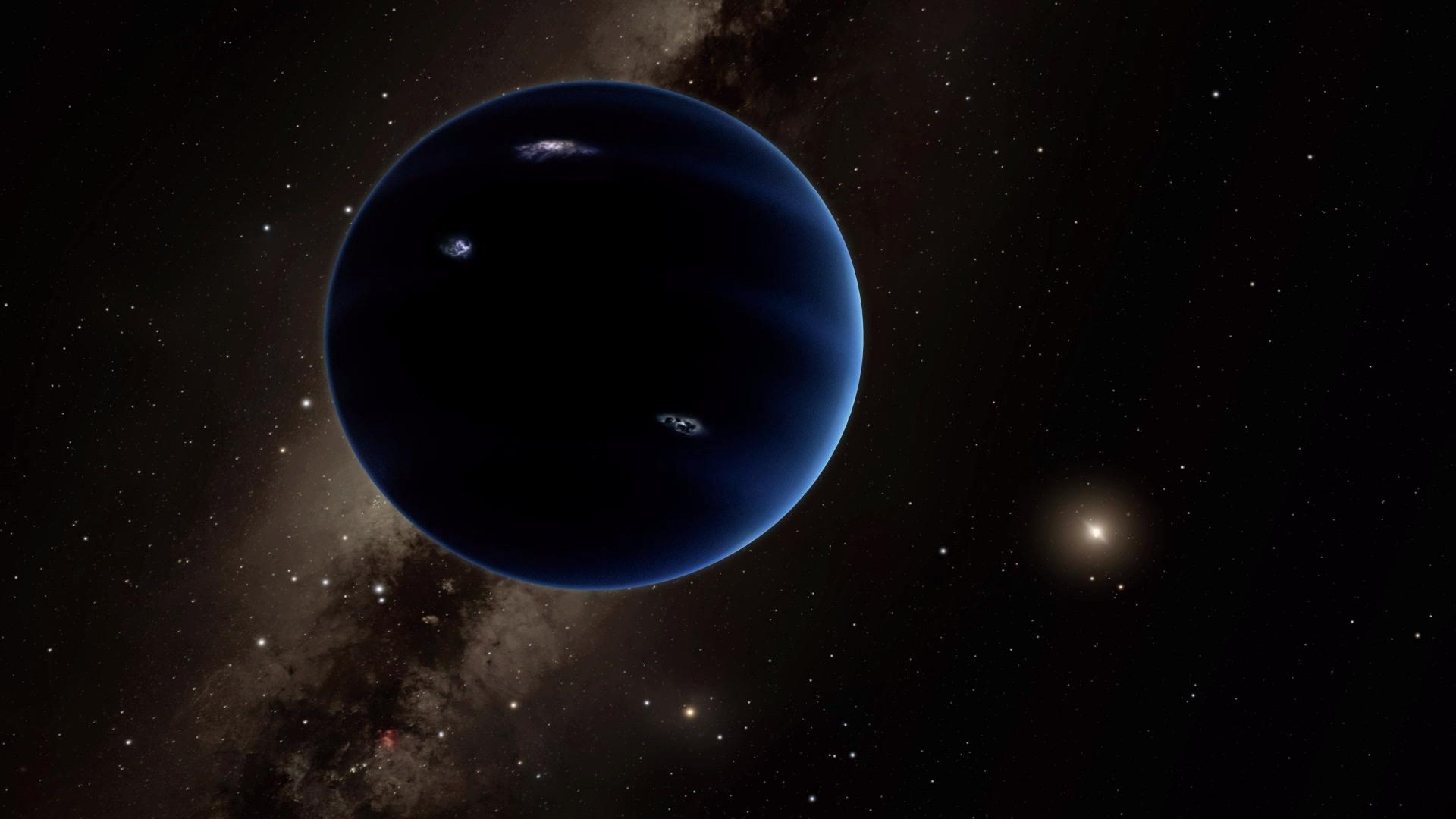 The following script is from “The Hunt for Planet Nine,” which aired on Jan. 8, 2017. Bill Whitaker is the correspondent. Robert Anderson, Aaron Weisz and William Harwood, producers.

How many planets are there? Nine is what we were taught. But as telescopes get stronger, and astronomers learn more about our solar system, long-accepted facts become fallacies. Pluto, had been considered a planet for 76 years.  But Pluto lost its planet status after an astronomer at Caltech discovered that Pluto wasn’t so special after all. His name is Mike Brown. Brown and other astronomers have since found hundreds of large balls of ice like Pluto, circling the sun, at the far reaches of our solar system. Demoting Pluto leaves us with eight planets. But Mike Brown is preparing another surprise. He is sure there is a real ninth planet way out far beyond Pluto.  He hasn’t seen it yet but he expects to soon. He believes the real Planet Nine is huge; and it’s out there.

Mike Brown: I would say at this point, I am certain.

Mike Brown: Yeah. That’s a rare thing to say-- for a prediction for a scientist. And I’m willing to say it.

Bill Whitaker: You do know how mind-boggling this sounds. I mean, a new planet hasn’t been discovered for 170 years. I believe you think it looks like this animation over my shoulder here?

Bill Whitaker: And we haven’t seen it? We can’t see it?

Mike Brown: It’s so far away that it’s actually just at the edge of what our biggest telescopes on the ground can possibly see because it’s so far away.

Fifty billion miles away. It’s also hard to find because it has an enormous orbit.

Mike Brown: Planet Nine we think takes something like 15,000 years to go around the sun.

To search for Planet Nine, Brown goes up Mauna Kea -- the big mountain on Hawaii’s big island, to use the big telescope, the Subaru.  Brown doesn’t look directly through the telescope.  He monitors pictures it’s taking of the same sections of sky on successive nights, and then compares them hunting for movement.

Mike Brown: We have to very systematically look at every patch of sky here, here, here, here. And what we’re looking for is actually kind of simple. We take a picture one night. We come back the next night. All the stars all the galaxies are in the same spot night after night after night.  And Planet Nine, when we see it, will slowly move across the sky.

And will look something like this—Brown’s discovery 11 years ago that changed the way we think of the solar system. Using pictures from successive nights, Brown discovered this Pluto-sized object, which led to the demotion of loveable Pluto.

Mike Brown:  I loved Pluto. I was totally fascinated by Pluto. When I started in astronomy, I started looking at this region of the sky because I thought it was so interesting out there.

Bill Whitaker: When Pluto was first discovered, it was thought to be a big planet?

Mike Brown: You can go back and find the “New York Times” headline on the day that the discovery was announced.  And it says, “Ninth planet discovered in the outer Solar System.  Possibly, larger than Jupiter.”

Jupiter’s the biggest planet.  But Pluto, it turned out, was no Jupiter.

Mike Brown: These are all the planets and other objects at their real relative sizes.

Bill Whitaker: This is Jupiter.

Mike Brown: Jupiter is huge compared to the other things. This is Jupiter. This is Saturn without its rings. Uranus. Neptune. Mercury. Venus. Earth. Mars. And at the very edge of the solar system as we now think of it is Pluto. It’s only wrong by a factor of 50,000.

Bill Whitaker: So it went from being a monster planet to being a dwarf planet?

Mike Brown: A dwarf planet. One of many that are out there, that are part of this region of the sky.

“This region” is the Kuiper Belt, at the edge of our solar system. A vast realm of frozen debris created during the birth of the solar system 4.5 billion years ago. The Kuiper Belt keeps Brown up all night, hunting for discoveries.

Mike Brown: It’s the most exciting thing I can think of doing. You know it’s not just that it’s hard to stay up all night and so I force myself to do it. I am excited every night I go out there about what I might find.

When Mike Brown found that Pluto-sized object, it was the biggest of a group of hundreds of Pluto-like objects recently discovered. So Brown wondered should Pluto really be a planet? But demoting Pluto would mean that every textbook showing planets would have to be changed. That was fine with Brown who believes planets must be significant and that the eight large planets are. Their strong gravitational fields control everything around them.

Mike Brown: Neptune controls Pluto’s orbit. Neptune is the bully of that neighborhood.

To resolve the issue astronomers from all over the world gathered in Prague in 2006.  The International Astronomical Union would decide whether to demote little Pluto or give planet status to hundreds of similar objects.

[From IAU: 6A is concerned with Pluto and Pluto like objects.]

Astronomers voted overwhelmingly to go down to eight planets, and Brown became known as the guy who killed Pluto.

The Pluto vote was ill-timed for NASA.

Just seven months before Pluto’s demotion, NASA launched a mission to Pluto -- to learn about its surface and origins. Scientists are still analyzing spectacular pictures from NASA’s flyby. They show Pluto’s mostly icy surface, and close-ups of craters.  Now the spaceship is heading deeper into the Kuiper Belt.  Although Pluto was demoted 10 years ago, Pluto-lovers still send Brown hate mail and voicemail.  He kept this one.

Even Brown’s 11-year-old daughter, Lilah, didn’t like what he’d done to Pluto.

Bill Whitaker: What did you tell him that he should do to make up for that?

Lilah Brown:  Well, I told him that if he found a new planet it might make up for the fact that he killed a planet that everybody loved.

Bill Whitaker: Seems that he actually went out and did that.

Bill Whitaker: What do you think of that?

She’s referring to the huge Planet Nine, we mentioned earlier. No one was more surprised by that discovery than Brown himself. Until recently he believed our planets would only be the big eight.

Mike Brown: We had explored so much of the solar system beyond those eight, that if there were anything else like a planet, we would’ve found it.

After all, NASA’s spaceships have flown past every known planet; capturing pictures of Saturn’s rings, the pock-marked surface of Mercury, the gassy atmosphere of Jupiter.  And well beyond our solar system, the Hubble telescope is busy taking pictures of distant galaxies. NASA says this single image shows 10,000 galaxies.  Other pictures show signs of black holes millions of light years away. And this one, a glimpse of stars being born. No wonder Brown had thought we’d found all our planets.

Bill Whitaker: So now, you think there’s another pretty big planet out there?

Mike Brown: Yeah. I am pretty dead certain that it’s out there.

Bill Whitaker: What makes you think that?

Mike Brown: As we were studying these objects out beyond Neptune, Pluto and the other objects in the Kuiper Belt, when you get to the most distant ones they all look like they’re being pulled off in one direction.

Bill Whitaker:  And you think the thing that’s pulling them is a big planet?

Bill Whitaker: Couldn’t there be some other explanation?

Mike Brown: We tried many different explanations trying to prove that it wasn’t a planet.  Nothing—nothing works.

Konstantin Batygin: I am 100 percent convinced.

Brown’s partner Konstantin Batygin, a planetary science professor at Caltech, came up with this mathematical proof—proof, he says, that Planet Nine is pulling those remote objects in similar oblong orbits.  It looks like mathematical gibberish to our untrained eye, but Batygin told us his equation melds 10 accepted formulas, and when coupled with more than 8,000 lines of computer code it describes Planet Nine’s orbit.   So, he says, he doesn’t have to see it, to know it exists.

Konstantin Batygin: The mathematics proves it. And it’s like being you know, downtown and hearing an ambulance a few streets away.  You haven’t seen it but you’re other senses provide you with the information that really this ambulance is really there. Here, instead of hearing it, you see it in the math.

Bill Whitaker: This is a roadmap to Planet Nine?

Konstantin Batygin:  Exactly. This in the end tells you where to look on the sky.

To speed up the search, Batygin and Brown published their roadmap so other astronomers could join the hunt.  Foremost among them is Scott Sheppard of the Carnegie Institution.  It was Sheppard who first spotted the odd orbits in the Kuiper Belt, that led Mike Brown to conclude there’s a huge planet out there.  Now Sheppard, like Brown, compares the pictures taken on consecutive nights hoping to spot Planet Nine.

Scott Sheppard: We just found some more small objects, very far in the solar system that continue the trend that there should be a Planet Nine out there.

Bill Whitaker: Is it important to you whether you are the first to find it or another astronomer finds it?

Scott Sheppard: It’d be great to be the first one to find it.  It is a race.  There’s a lot of people looking for it.  But, just to have it found is, is what we want.

Bill Whitaker:  When do you think we might actually identify, spot Planet Nine.

Mike Brown: I think that within three years, we will be able to cover that swath of sky that that we need to cover.

Bill Whitaker:  Is this giant Planet Nine the last planet we’ll find in our solar system? Or is there a Planet Ten?

Mike Brown:  Is there a Planet Ten? Yea. We don’t know. Planet Nine is already far enough away that it requires the biggest telescopes we have to find it. Planet Ten is even further. Planet Nine is our generation’s planet.  It’s the perfect planet to find right now.  Planet Ten, this is when I talk to kids, I tell them, “Planet Ten, it’s yours.  Go, go find it.”