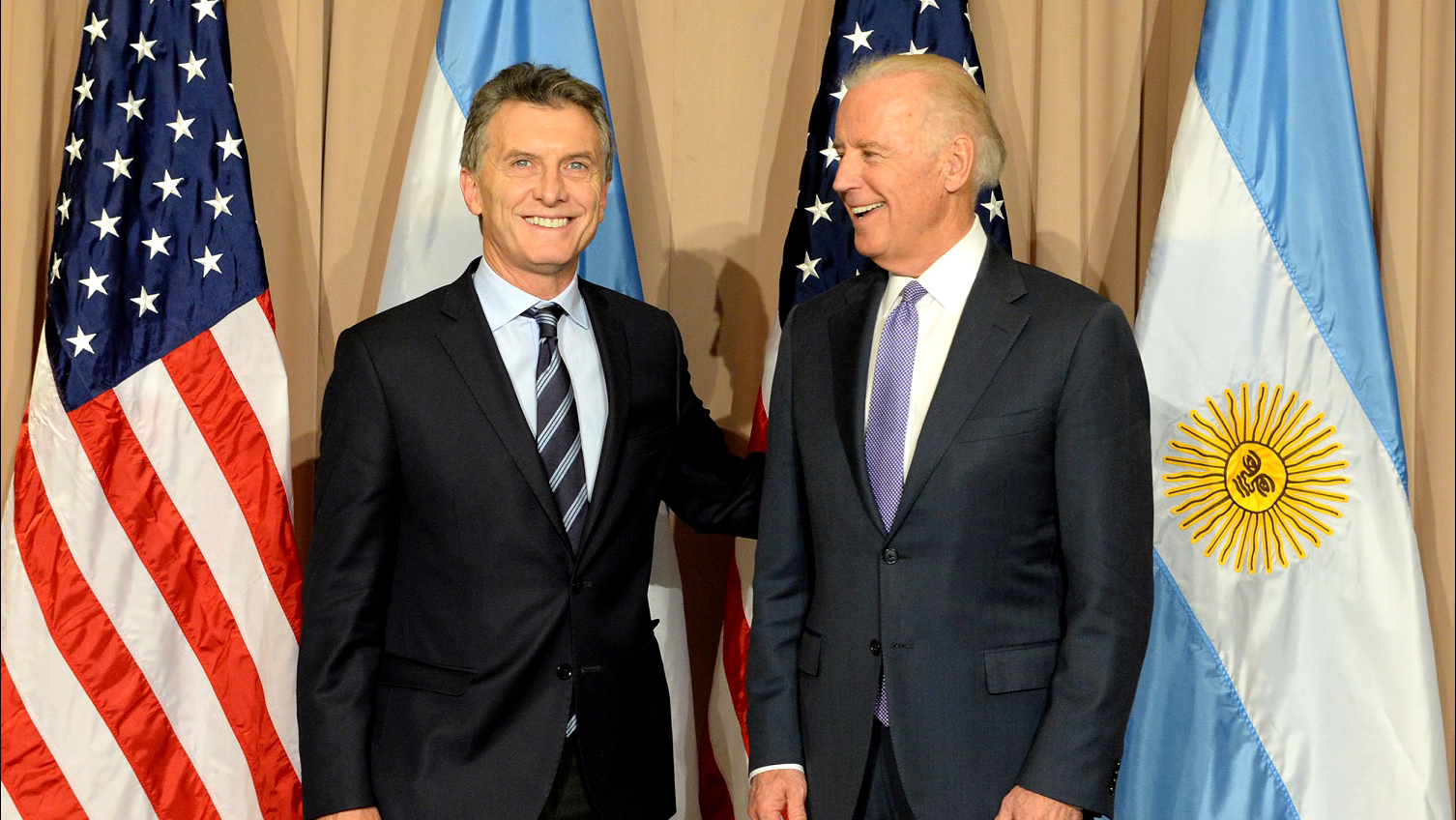 The following script is from "Presidente Macri" which aired on March 20, 2016. Lesley Stahl is the correspondent. Shari Finkelstein and Nieves Zuberbühler, producers.

There's a lot in the news about a wealthy businessman-turned-presidential candidate with a five-letter last name. But the one we're going to tell you about tonight already won his election and his last name isn't Trump; it's Macri.

He is the new president of Argentina, a surprise, come-from-behind victor who has the eyes of the region and the world on him as he tries to pull his country -- the second largest in Latin America -- out of a morass of debt, inflation, and international isolation. This week, President Obama will be the first U.S. president in more than a decade to visit Argentina, a sign that the U.S. government has high hopes for Mauricio Macri and his promises to turn his country around.

We met Mauricio Macri just two months into his presidency in Argentina's version of the White House, a pink house, called the Casa Rosada. He took over a country that had been ruled for eight years by a left-wing populist named Cristina Kirchner who allied Argentina with anti-American regimes like Iran, Venezuela and Cuba.

Lesley Stahl: Here Argentina has been in this almost a bloc that takes in almost all of South America.

Mauricio Macri: That was--

Mauricio Macri: Not anymore. That was, and not anymore.

Not anymore because he made a U-turn in his country's foreign policy. In a flash, Argentina has become pro-American. Macri and Vice President Biden were all smiles at the World Economic Forum in Davos, Switzerland, in January, where Macri went seeking closer ties with the West and foreign investment. He brought one of the men he defeated in the election with him, which impressed the vice president.

Biden: I want the American press to observe something. The new president brought along the leader of the opposition with him. That's what we got to do at home.

Mauricio Macri: I really believe in 21st century demands that we have to be open, and not putting any more ideological differences in front of the best solutions.

He's a pragmatist. Trained as an engineer, Macri started off an outsider in Argentine politics. He is the son of one of the wealthiest men in the country, and worked at first in the family real estate and construction business, once making a deal with that other scion of a real estate empire.

Lesley Stahl: I heard that you actually have a relationship with Donald Trump.

Mauricio Macri: It's a long story, long away.

It was more than 30 years ago. Macri told us his father had invested in a real estate venture in New York City but ran into problems and asked him to arrange a sale to Donald Trump.

Mauricio Macri: It was a very unique moment for me because I was only 24 years old.

Lesley Stahl: You negotiated with the guy who says he's the best negotiator in the world?

Lesley Stahl: Did he win?

Mauricio Macri: We were in a very weak position. Because the-- he was local. Having the support of all the banks. But I could say that we tied.

Now, at 57, he's happily married to fashion designer Juliana Awada. Watching them play with their four-year-old daughter Antonia, you can't help but think of the Kennedys and Camelot -- and the comparison has been made in Argentina.

When Macri ran for president, no one thought he would win, partly because of his image as a wealthy businessman unable to connect with the people. But that image was softened by campaigning with his wife and young daughter at his side and by their openness about their relationship.

Juliana Awada: I never imagined I was going to end-- with him. And when I have the opportunity to met him, I fall completely in love.

That was seven years ago. He'd already been married twice and had older children -- as did she.

Mauricio Macri: I call my best friend. I told him, "I'm going to marry again." "No, come on, you can't do it. You have just finish a relation two months ago." "No, this is the lady of my life. I want to be with her for the rest of my life, and I'm sure that this is the correct decision."

At their wedding the following year, Macri revealed a hidden talent.

Lesley Stahl: You're a great singer?

He set out to prove it at their wedding party. He dressed up as his favorite rock star, Freddie Mercury of the band Queen -- complete with a fake mustache, and started serenading Juliana. It almost killed him.

Mauricio Macri: And in the moment I was breathing to sing the up part of "Somebody to Love," I swallow my moustache.

Lesley Stahl: You swallowed the moustache--

He started choking on the Freddie Mercury moustache.

Juliana Awada: Half an hour.

Mauricio Macri: Thinking that I was going to die. I couldn't breathe. Now is funny, but it was a horrible moment, yeah.

Lesley Stahl: You've had a couple of brushes with death, actually.

Mauricio Macri: No, no. This was quite funny. The other one wasn't so funny.

The other one happened when he was 32. He was grabbed off the street - and kidnapped.

Lesley Stahl: Is it true when they kidnapped you, they put you in a coffin?

Mauricio Macri: Yes. To take me to the place. And then in another little bit bigger coffin. It was a box.

Lesley Stahl: Did you think you'd never live through that?

Mauricio Macri: You keep thinking all the-- all day because you are trapped there with nothing to do, so you think I'm going to die, I'm not going to die because in many cases that group of kidnappers killed the victims.

But he was released, after his father paid a $6 million ransom. The incident changed the trajectory of Macri's life, dramatically. It persuaded him to leave his father's business and set out on his own. First he became president of one of Argentina's most popular soccer teams, Boca Juniors. He then tried his hand at politics. He created his own third party and eventually ran for mayor of Buenos Aires. On his second attempt, he won. That's when a whole new Macri emerged.

Dancing has become a Macri trademark.

Lesley Stahl: You're known for this.

Mauricio Macri: You know, dancing is like it's another way of communicating, no?

Macri got to live out two dreams in December when he danced on the balcony of the presidential palace at his inauguration -- after a close, hard-fought election that left the country bitterly divided. Even the transition was contentious. Breaking tradition, the outgoing president Cristina Kirchner refused to attend the swearing in.

Kirchner had been a charismatic leader, in the style of the popular Eva Peron, who shared the spotlight with her husband, President Juan Peron, in the 1940s, and whose legend went all the way to Broadway.

"Don't cry for me Argentina"

The Peronist Party has dominated Argentine politics on and off for the last 70 years. Kirchner was a Peronist, whose populist economic policies: generous subsidies on things like electricity, high taxes on agricultural exports, burdensome regulations, a bloated bureaucracy, and currency controls, all in combination, crippled the Argentine economy.

Alfonso Prat-Gay: She left an economy that's not been growing for four years now, a stagnant economy.

Alfonso Prat-Gay: High inflation. Eight years in a row of more than 25 percent inflation. A significant fiscal deficit. The Central Bank was running out of reserves.

Lesley Stahl: This is what you walked into.

And making matters worse, the Government Bureau of Statistics, called INDEC, had been minimizing the problems.

Alfonso Prat-Gay: The National Statistics Institute was an institute that was basically lying to us and to the rest of the world.

Lesley Stahl: And it wasn't real--

Mauricio Macri: If you have a problem, you have to recognize it, and solve it.

That's my commitment, no?

Mauricio Macri: We are building up the real numbers.

Even without those precise numbers, he and his team plunged into action, undoing Kirchner's legacy. What has heads spinning here is the speed with which they have changed course 180 degrees in just a matter of weeks.

Lesley Stahl: Fired thousands of government workers. You have done so many dramatic, big things.

Mauricio Macri: Well, but we need it. We need it because we need to put our country back to growth. We were trapped with so many rules, that we couldn't move.

But he raised eyebrows, by making the changes while the Peronist-dominated Congress was in their summer recess.

Lesley Stahl: Most if not all of the things you've done, dramatic, big, you did by presidential decree. Congress is on recess. You didn't negotiate with them. You didn't consult with them.

Mauricio Macri: I'm using the constitution. I will always respect my constitution, it's a very good one.

Lesley Stahl: But you criticized Cristina Kirchner for doing that. You said she didn't go through the democratic process.

Mauricio Macri: Lesley, I only criticized her when she did it going over the constitution.

Lesley Stahl: You say that, but you've been highly criticized, just making all these decrees.

Mauricio Macri: Well, you know-- at a certain level always the opposition has to criticize something. Let them.

Macri has worked hard at winning over as many in the opposition as possible. He met early on with the two men he ran against as well as all the nation's governors, and since Congress has come back, he's shown his political skill by convincing a whole bloc of Peronist legislators to work with him.

Mauricio Macri: I have received all of them, and say, "Well, I'm ready to work. Do you agree that we need to work towards zero poverty? We have to defeat drug trafficking. We have to improve the quality of our democracy." Well, yes. Well, let's find in which specific projects we can do it. And we found-- we found, and we are finding that there are ways in which we can cooperate, even though in two years we are going to compete again in an election process. But in the meantime we will show our citizens that what they are demanding, is going on. That we work together.

What a concept -- two sides looking for compromise. The public seems to like it -- Macri's approval ratings are over 60 percent, but it's early. Trade unions are threatening strikes, and the only other non-Peronist presidents in over 30 years were both forced out of office before the end of their first terms.

Lesley Stahl: What's the pressure like on you at this moment? You're doing so much so quickly.

Mauricio Macri: That we have to do more. That's the pressure. We are in a very bad starting point, but let me tell you, I'm here running the country because I believe in my people. I have the luck to choose what to do in my life. And I have chosen this because I believe that everybody can do much better than what they are doing now. So I'm trying to do my best. Trying to do my best.

After we interviewed him, another big development. President Macri has settled a multibillion dollar battle with New York hedge funds that will allow Argentina, after 15 years, to once again raise financing overseas and help attract foreign investment.