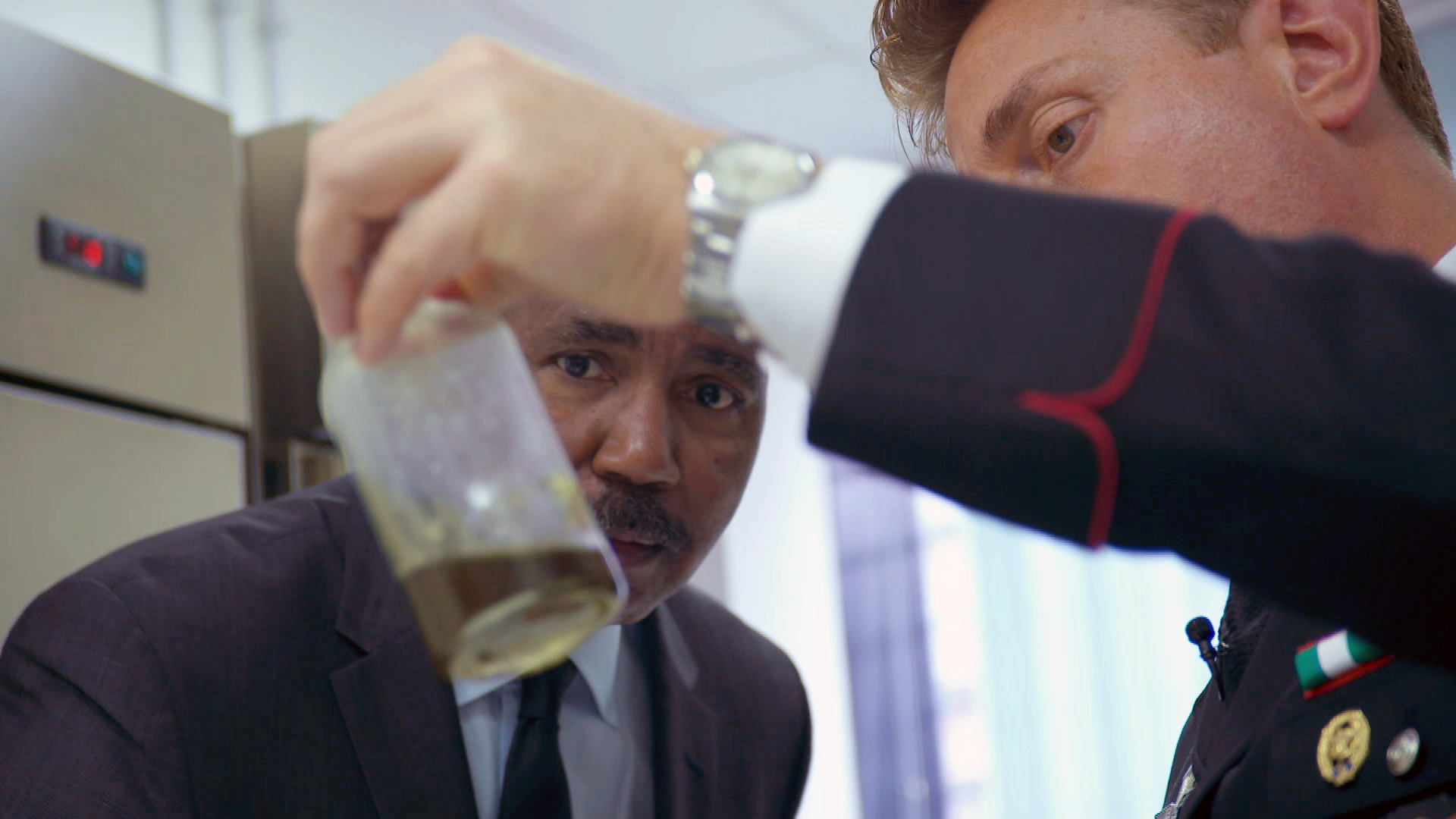 The following is a script from "Agromafia" which aired on Jan. 3, 2016. Bill Whitaker is the correspondent. Guy Campanile, producer.

When it comes to knock-offs of Italian classics -- you probably think of fake Guccis or Pradas -- not food.

But last month, police in Italy nabbed 7,000 tons of phony olive oil. Much of it was bound for American stores. The oil was from North Africa, deodorized with chemicals and rebranded as more expensive Italian extra virgin. The scam was cooked-up by organized crime.

Mafia copies of fine olive oil, wine and cheese have fueled an explosion of food crime in Italy. It's estimated to be a $16 billion-a-year enterprise. The Italians call it "Agromafia"...and it's a scandal for a people whose cuisine is considered a national treasure.

The image of gangsters in the kitchen was too delicious for us to ignore. So we went to Italy, where we found elite food police hunting wiseguys and signs Agromafia specialties are reaching the United States.

Leave it to the Italians to fight the Mafia with good taste. This panel certifies the authenticity of extra virgin olive oil - a favorite target of the Agromafia.

They can tell at first sip whether extra virgin has been diluted with cheap sunflower oil or canola.

Bill Whitaker: Sergio, why do they make that sound like they are sucking in air?

Sergio Tirro: They need it to mist it in the back of their throats..

Bill Whitaker: They have to suck it in the back of their throats..

Sergio Tirro: They have to suck it in...

Major Sergio Tirro is considered one of the top investigators of food fraud in Europe. Think Elliot Ness - in a uniform designed by Giorgio Armani.

Sergio Tirro: Most of the fraud has been discovered with the expertise like this...

Their skill is so respected, Italian courts will accept taste results as evidence. Tirro has 60 cops trained to do this too and 1,100 more conducting inspections and fraud investigations. On the day we visited headquarters, officers were monitoring wiretaps and live video from hidden cameras placed in suspected warehouses around Italy.

Sergio Tirro: Yes. We can call ourselves the FBI of food.

In the last two years, they have seized 59,000 tons of food. The Agromafia's ingredients are poor quality and sometimes contaminated with solvents or pesticides.

Bill Whitaker: When I tell somebody that I'm coming to Italy to do a piece about food fraud -- it almost seems unbelievable.

Sergio Tirro: It is a serious problem because it's not only a commercial fraud...if you adulterate an extra virgin olive oil with seed oil and those bottles reach consumers who are allergic to seed oil, you are sending them bombs.

The Agromafia has also tried to rip-off Italian shoppers with mozzarella whitened with detergent and rotten seafood deodorized with citric acid.

Bill Whitaker: My favorite, Italian wines, how are they adulterated?

Sergio Tirro: They generally use, to mix, poor quality wine and brand it as famous wine.

Bill Whitaker: So you take a cheap table wine and just put a famous stamp on it?

Bill Whitaker: And sell it?

In Tuscany, cops found 42,000 gallons of run-of-the-mill red that was to going to be sold as top-notch Brunello Di Montalcino. The score could have been $5 million.

Bill Whitaker: So this is everything. Olive oil, tomatoes...

Journalist Tom Mueller has lived in Italy for 20 years and speaks routinely with investigators and food producers.

Bill Whitaker: So where along the food chain does the Mafia get involved?

Tom Mueller: From harvesting...they impose their own workers, they impose prices...to the transportation and there's involvement in-- Mafia involvement in supermarkets as well. So certain areas, they have really infiltrated the entire food chain from the farm to the fork.

Mueller first wrote about olive oil fraud in 2007 for the New Yorker Magazine.

Tom Mueller: You in many cases are getting lower grade olive oil that has been blended with some good extra virgin olive oil...you're sometimes getting deodorized oil. They blend it with some oil that has some character to give it a little color, a little flavor...and they sell that as extra virgin. It's illegal - it happens all the time.

Extra virgin must come from the first press of olives and be free of additives. It's fruity, aromatic and has a spicy finish. The best can sell for $50-a-gallon...but a fake costs just seven dollars to make. The profit margin can be three times better than cocaine.

Sergio Tirro: I would like to show you how easy is to make a genuine fake extra virgin...

Sergio Tirro: It is sunflower oil, no smell at all.

Sergio Tirro: Then we just have to add a few drops of chlorophyll.

Bill Whitaker: ...and it becomes the color of olive oil.

Sergio Tirro: It becomes the color of olive oil.

Eighty percent of Italy's extra virgin comes from the southern part of the country. So we went to Sicily - where the Mafia remains part of daily life in the streets and in the fields. Nicola Clemenza's olive grove is a 90-minute drive south of Palermo. We went to see him because Clemenza is leading a farmer revolt against Mafia control. His olives are hand-combed from the trees onto nets below and immediately sent to be pressed.

Clemenza told us the Agromafia dilutes the oil and controls prices. He's defied the mob by organizing 200 farmers to skip the Mafia middle men and sell their oil directly to distributors.

Bill Whitaker: When you organized the farmers, the Mafia retaliated against you?

Nicola Clemenza, translator: On the day I started the consortium, they burned my car, they burned down part of my home and I was inside with my wife and my daughter.

Bill Whitaker: They tried to kill you...

No - he said it was a message to stay quiet. This is a police image of the man Clemenza believes ordered the attack. He is Matteo Messina Denaro -- the boss of bosses for the Cosa Nostra. Many believe he's hiding out in the town not far from Clemenza's fields. Denaro built a $41 million olive oil empire.

Tom Mueller: It's very difficult to say in any given case with olive oil exactly how many drops in a given bottle actually have Mafia blood on them to sound dramatic. It is fairly straightforward to say, however, just how much fraudulent oil is in circulation--

Bill Whitaker: How much?

Tom Mueller: Easily half of the bottles that are sold as extra virgin in supermarkets in Italy do not meet the legal grades for extra virgin oil.

Bill Whitaker: So half here in Italy, what would it be in the U.S.?

Food imported into the United States is inspected by Customs and Border Protection. Its New Jersey chemists told us they have detected phony oil imported from Italy improperly labeled as extra virgin.

We were curious about what we'd find in a U.S. supermarket. So we shipped three brands of Italian extra virgin we purchased in New York back to the mother country.

They were included in a blind taste test by those experts in Rome. The process is as tightly orchestrated as a Verdi opera. Blue glass hides the oil's color. Separate cubicles prevent cheating.

The panel would not say they were adulterated - but they agreed two brands we purchased back home did not come within a sniff of extra virgin. They described one as lampante -- the lowest quality olive oil. That brand happens to be one of the best-selling in America.

Sergio Tirro: It's not that bad...

Bill Whitaker: It's not that bad...

Sergio Tirro: Not that bad...but maybe for..

Bill Whitaker: Not that good either?

Sergio Tirro: No -- not for my salads. I would never put this on my salad.

Chances are that salad was picked by migrants controlled by the Agromafia too and served in one of Italy's 5,000 mob-owned restaurants. Last spring, these two tourist spots in Rome -- were temporarily closed for alleged Mafia ties.

And the food businesses not run by gangsters -- often pay them anyway. The extortion is called "pizzo." Refuse -- and you risk broken windows - or worse.

Bill Whitaker: What percentage of the merchants here are paying the pizzo, protection money to the Mafia?

Ermes Riccobono: Actually we cannot know for sure, we could say that a big part of this.

Bill Whitaker: Most of them.

Ermes Riccobono: Most of them, we could say yes.

Ermes Riccobono took us around one of the oldest food markets in Palermo. He works with a group called Addiopizzo, which means "farewell pizzo." It's enlisted 800 stores and restaurants to stop paying the Mafia.

Ermes Riccobono: They've been doing this for so long, generation by generation, that it's normal for them. It's not even a problem.

Bill Whitaker: How much would they be asking of these merchants?

Add it up and extortion costs Italy at least $6 billion a year.

Bill Whitaker: What makes you think that your young organization is going to stop this?

Ermes Riccobono: Well, it's what we need to do. I mean it's our moral obligation. We are a young generation. And we need to fight.

We were told we could see how the fight has taken root just a short drive from Corleone -- the town made famous by "The Godfather." Over the last decade, cops have taken 3,500 acres away from Mafia owners and given them to the group "Libera Terra" (or "Free Land." These fields confiscated from the mob have created a booming business for farmers.

Pietro D'Aleo: We have around 80 food and beverage products made with raw materials coming from this land.

Marketing manager Pietro D'Aleo gave us a taste of their success.

Libera Terra products are sold in shops across Italy. It turns out "Mafia-free" is a hot seller -- especially if the food is world class.

"They don't look like the olives on your plate..."

Nicola Clemenza hopes he can break the Agromafia's grip where he lives by exporting directly to American customers.

Bill Whitaker: What is your greatest fear now?

He figures his best weapon -- is the liquid gold that tastes as rich as it looks.

Bill Whitaker: You can feel it going all the way down...