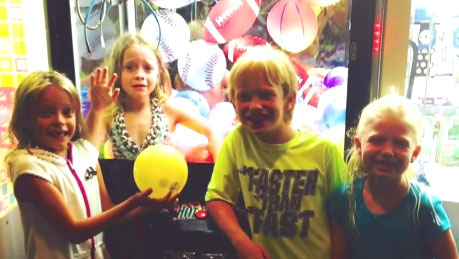 FRISCO, Texas- A little girl in Texas is grounded, with no sweets or television, but she sure has a good story to tell for the reason why.

Six-year-old Juliette Grimes was eating at a pizza parlor in Frisco, Texas when her older sister delivered an irresistible dare, reports CBS Dallas-Fort Worth.

Juliette said she just wanted to get her sister a ball from the machine.

Juliette's mom and other adults were keeping an eye on the arcade room, but they missed the moment Juliette climbed into the shoot where the prizes fall down, trapping herself inside the arcade game.

"If there's a boundary, they're meant for other kids," said her mother Cecilia Green. "Not for her ... anything and everything is a challenge."

Frisco Fire Department came to the rescue. They were able to free Juliette from the game.

"I don't think she's going to do it again," Green told CBS DFW. "Hopefully, at least, another few years, at least."

Older sister Katy was quick to point the finger at her younger sister.

"I hope you learned your lesson!" she giggled.