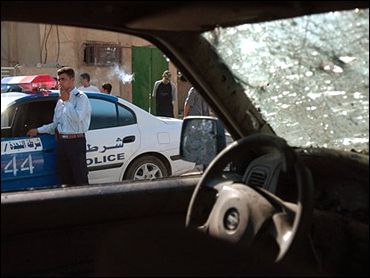 Insurgents killed seven Iraqi security personnel in a car bombing and other attacks Tuesday, and the U.S. military announced the deaths of six Americans, including four killed by guerrillas.

The American dead included two soldiers killed by a roadside bomb and two Marines who died after being wounded in fighting Monday. Two others died in non-combat-related incidents. The U.S. deaths brought at least 919 the number of U.S. service members who have died since the beginning of military operations in Iraq.

Also Tuesday, saboteurs set off a bomb at a key northern oil pipeline, sparking a fire and sending huge plumes of thick black smoke into the sky. The explosion had no immediate effect on exports, which had been halted for weeks from the north.

"We expect that as Iraq's (security) capabilities increase, the crushing of these (armed) operations will increase," Allawi told reporters Tuesday.

Meanwhile gunmen, apparently Sunni Muslims, shot Tuesday at an office belonging to the movement of Iraq's most senior Shiite cleric, Grand Ayatollah Ali al-Husseini al-Sistani, in the town of Yusifiya, about 15 miles south of Baghdad - an area of frequent insurgent attacks.

The Shiite residents shot back, killing six of the attackers and capturing three, according to Col. Anwar al-Ubaidi, police chief of the nearby town of Mahmoudiya.

In the city of Najaf, south of Baghdad, forces loyal to radical Shiite cleric Muqtada al-Sadr were holding 18 police hostage as leverage to force authorities to release their comrades, a police official said Tuesday on condition of anonymity.

The abductions reflected increasing friction that has threatened a fragile truce that ended two months of fighting that began in April between al-Sadr's Mahdi Army militia and U.S. troops. Marines and al-Sadr's militiamen engaged in a battle in Najaf on Monday that killed a woman.

Al-Sadr aides have accused police of targeting members of his Mahdi Army.