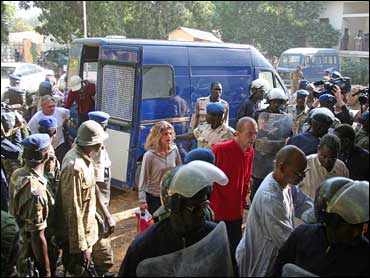 The sentence came on the fourth day of the trial of the Zoe's Ark workers, who were charged with fraud and kidnapping after authorities stopped a convoy with the children, whom the charity was planning to fly to France in October.

The defendants maintain they were driven by compassion to help orphans in Darfur, which borders Chad. An uprising that flared in Darfur in 2003 has led to the deaths of more than 200,000 people and forced 2.5 million to flee.

But subsequent investigations revealed most of the 103 children that Zoe's Ark was planning to fly out were Chadians who had at least one parent or close adult relative with whom they lived.

The wife of Zoe's Ark logistics chief Alain Peligat expressed a "feeling of injustice, of course, because this case involves doctors, rescue workers, professors - not mercenaries - and they were simply going to save lives."

"The rumors were that it was going to be 10 years," Christine Peligat said by phone from the Champagne region east of Paris. "I'm not happy with a conviction of course, but it didn't exceed 10 years."

"In any case, this case doesn't hold up," she added.

The French Foreign Ministry in Paris declined to comment on a judicial verdict by another nation, but said it would ask Chadian authorities to transfer the six convicted to France. The countries have a bilateral judicial agreement that could allow for the six to be transferred home.

The case has embarrassed France and sparked protests in this central African country, a former French colony.

France's role in the region has already come under scrutiny in recent months as the European Union plans to send a military mission to Chad to protect refugees fleeing violence in neighboring Sudan.

The deployment of the approximate 4,300-member force, drawn largely from France, already has been delayed because of lack of necessary equipment. Last month, a Chadian rebel group has declared a "state of war" against French and other foreign armies - an apparent warning to the EU force.

Earlier Wednesday, defense lawyer Gilbert Collard said he was happy to see the prosecution had recommended less than the maximum 20 years. But, he added, the prosecution's recommendations "would be excessive."