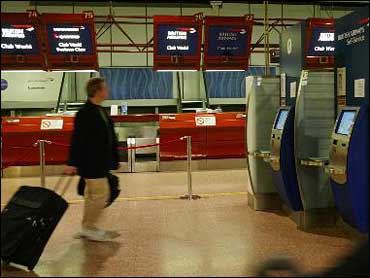 Six U.S.-bound flights from Britain and France have been because of security concerns. The U.S. government said it had fresh indications of al Qaeda's continued interest in targeting commercial planes flying to the United States.

U.S. officials have been concerned for some time that al Qaeda wants to use chemical, biological or radiological weapons aboard an airplane. But one U.S. official says the information that led to this weekend's cancellations
didn't indicate any specific threat.

Three intelligence officials tell The Washington Post that the feared threats to the flights include the release of an undetectable biological agent like smallpox or anthrax, the release of a chemical agent that disables the crew so the plane can be hijacked, and sneaking a radiological device aboard a plane. These feared are based on vague intelligence.

British Airways grounded the same flight scheduled Sunday and Monday from London's Heathrow Airport to Dulles International Airport outside Washington, as well as the return flights. Also canceled was a flight from London to Miami on Sunday.

Air France scrubbed the same flight set for Sunday and Monday from Charles de Gaulle Airport in Paris to Dulles. As a result, the outbound flights were canceled.

Despite those threats, Roehrkasse said the department had no plans to raise the nation's terror alert level from yellow, or elevated risk of terrorist attack. Yellow is in the middle of the five-color coded scale.

The decision to cancel the flights was made jointly by the U.S., British and French governments, according to a senior U.S. law enforcement official speaking on condition of anonymity.

An official close to French Prime Minister Jean-Pierre Raffarin told The Associated Press that the Air France flights were canceled because of "serious threats." The official, who spoke on condition of anonymity, declined to elaborate.

A British Airways spokeswoman said the airline acted on the advice of the British government.

The U.S. government official said the three countries discussed a variety of aviation security steps, such as sky marshals on the U.S.-bound flights, but that Washington placed no demands on the French or British.

Terrorism experts point out that the possible threats could be nothing more than a head fake by al Qaeda, but they also worry about the lure of Super Bowl Sunday, according to CBS News Correspondent Tony Guida.

Randy Laresn tells Guida, "It is certainly a time that if al Qaeda wanted to pull off a spectacular attack, which is what they always talk about, the world's attention will be on TV screens (during the game)."

But the U.S. government official told The Associated Press there was no direct intelligence to indicate any threat to the Super Bowl game in Houston.

A White House spokesman, Trent Duffy, said the cancellations show that "the administration is going to stand guard and protect the American people."

Flight 223 did take off Saturday from London for Washington, with an evening arrival expected. No extra security measures were visible around the jet when it left Heathrow.

As Dennis Lopez, a lawyer from Tampa, Florida, boarded the flight, he said the talk of all the cancellations was unnerving.

"I'm a little worried and if I had another flight arrangement right now that could take me there I would definitely take advantage of that," he said.

He said he had just arrived from Kuwait and "breathed a sigh of relief" when he landed in London, thinking he was out of the area of most concern. "It hadn't occurred to me that this flight could be a possible target," he said.

In Miami, people arriving on flight 207 from London said they did not know about the security concerns that led to that flight's cancellation on Sunday.

"They certainly didn't announce that on the flight," said Rob Willows of Colchester, England.

Added flight attendant Steven Southern: "We were aware that there was security threats with all the East Coast flights, but that's all we knew."

Some of the flights that have raised concerns are the same as those that drew increased attention when the U.S. terror alert was raised temporarily to orange, or high risk, before Christmas.

It returned on Jan. 9 to yellow, though government officials said heightened security would remain at some airports and in some cities, such as New York, Washington and Los Angeles.