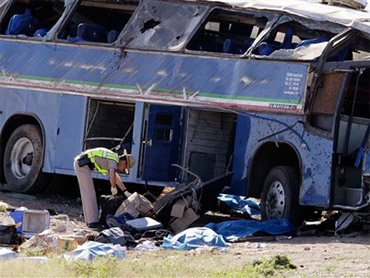 The bus company involved in a deadly accident on the interstate south of Phoenix Friday has been operating without insurance for nearly a year, and its buses should not have been on the road, CBS News Affiliate KPHO-TV reports.

The carrier, Tierra Santa Inc., lost its authorization to operate on April 1, 2009, KPHO-TV found while checking the company against the Web site of the Federal Motor Carrier Safety Administration.

A phone message left by The Associated Press with Tierra Santa was not immediately returned.

KPHO-TV also reports the company, which operates in the United States out of Van Nuys, Calif., has a history of violations, including one failed bus inspection resulting in the bus being taken out of service. Two of the company's drivers had also lost their authorization to drive. In the last two years, the company has been involved in one other crash.

Six people were ejected from one of Tierra Santa's buses and killed Friday when the vehicle hit a pickup and rolled over on the interstate south of Phoenix, state police said.

The six were thrown about 10 yards in the accident about 5:30 a.m. on the Gila River Indian Reservation near the community of Sacaton, according to the Arizona Department of Public Safety. Their bodies were covered with blue tarps midmorning Friday, and police said there may be another victim under the bus.

The roof of the bus was crushed and all the windows were knocked out, with one thrown as far as 25 yards.

DPS spokesman Bart Graves said two men and four women, all aboard the bus, were killed. The bus, traveling from central Mexico to Los Angeles, was carrying at least 22 passengers, and the surviving 16 passengers were all injured. Police said the rollover triggered a second accident when another pickup slowed and was hit by a sedan. One person from the sedan was taken to a hospital.

Eight of the injured were taken to Maricopa Medical Center in Phoenix, where six were in critical condition with life-threatening injuries ranging from broken spines and pelvises to head injuries, hospital spokesman Michael Murphy said.

He said an 11-year-old boy and the bus driver were among the patients at the hospital, and that the two were in guarded condition with non-life-threatening injuries.

Alex Porras said his sister, 25-year-old Jasmine Porras, was coming back from a two-week vacation in Mexico when the bus crashed Friday morning. She was critically injured.

"I was shocked when I got the call," a red-eyed Porras told The Associated Press at Maricopa Medical Center. "We're really worried."

Alex Porras, 28, said his sister, who is married, had just graduated from Arizona State University with a nursing degree and was hoping to start working soon so she could help others.

Early reports said the bus hit a semi, but Graves said later a semi was not involved in the crash.

Police said the bus hit the pickup, veered into the central median, then overcorrected and rolled once before landing on its wheels.

The accident scene quickly became a mass of police and rescue personnel as ambulances arrived and medics set up a triage area in the middle of the normally busy interstate, preparing the injured for transport.

Emergency crews needed to break the bus' windows to remove everyone from the vehicle, KPHO-TV reports. A triage area was set up in the middle of the interstate.

Medical helicopters landed on the freeway to airlift the most critically injured to area hospitals.

The bus originated in central Mexico near Durango, Graves said. It entered the United States at El Paso, Texas, and was traveling westbound on I-10.

Two drivers were onboard, the main driver and a relief driver. The plan was to switch drivers in Phoenix, Graves said.

Graves said the investigation will include whether the driver was fatigued as well as the maintenance history of the bus.

Both westbound lanes of I-10 were closed at milepost 173, and traffic was being rerouted onto State Route 587 until further notice.

The accident scene, about 25 miles south of downtown Phoenix, remained under investigation.