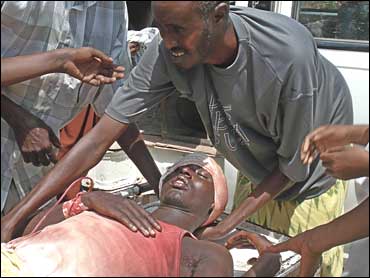 Sudan Ali Ahmed, chairman of Elman Human Rights, also said 7,980 people were wounded and more than 700,000 displaced from their homes as the country's government has struggled to contain a bloody Islamic insurgency.

The group, which releases monthly human rights reports, has been tallying the death toll in secret after the mayor of Mogadishu banned the organization in October.

"Our staff members are collecting figures and facts about human rights abuses by visiting residential areas and medical centers," Ahmed told The Associated Press by telephone Sunday from an undisclosed location.

Mogadishu Mayor Mohamed Dheere ordered the independent Somali group to close its offices on Oct. 8. Ahmed said his group was accused of spreading "exaggerated and false information" about the country's fragile government.

Dheere could not immediately be reached for comment as his cell phone want unanswered.

Elman Human Rights has 116 staff across the country. The group has tracked the killings of civilians during Mogadishu's near-daily violence this year and has also reported on violations in recent years.

Ethiopia came to the aid of Somalia's government in December to rout an Islamic group called the Council of Islamic Courts. The Islamic group's fighters then threatened an Iraq-style insurgency, and thousands of Mogadishu residents have been killed this year in the capital's seemingly endless gun battles, grenade and mortar attacks.

Somalia has not had a functioning government since a group of warlords overthrew dictator Mohamed Siad Barre in 1991, then turned their heavily armed supporters on each other.