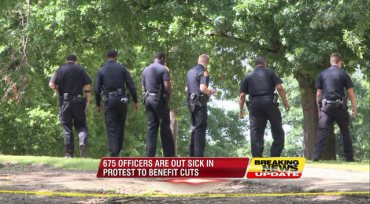 MEMPHIS, Tenn. -- Hundreds of Memphis police officers have called in sick over the past week, apparently to protest a decision by city officials to reduce their health care subsidies.

The number of officers calling in sick had increased to 554 by Tuesday, said Memphis police spokeswoman Karen Rudolph - about a quarter of the 2,200-person force.

Sources told CBS affiliate WREG that by the end of the week, it's expected everyone in the homicide bureau will be out sick.

The officers have been calling in since June 30. Memphis Police Director Toney Armstrong has said the calls are to protest the City Council's vote to reduce health care subsidies for police, firefighters, and other city employees in order to redirect money to the city's troubled pension fund. Officers and firefighters, along with their families, have staged protests at City Hall since the vote on June 17.

Gov. Bill Haslam said Tuesday that the Tennessee Highway Patrol has offered to have troopers fill in for the officers.

Haslam told The Associated Press that Department of Safety and Homeland Security Commissioner Bill Gibbons has been in contact with Memphis Mayor A C Wharton Jr. about the situation. It was not immediately known if the troopers will actually be called in to help.

"We have plans to dedicate a certain number of officers there from the Highway Patrol," Haslam said. "Obviously we can't do that forever, but we do want to step in and help."

Armstrong has said that officers who abuse the department's sick-leave policy will be disciplined. City employees have been notified that anyone calling in will have to speak to their supervisor every day they are out and state what duties their illness prevents them from performing, Wharton said Tuesday. After three days of illness, they must have a doctor's note saying why they can't perform their duties, Wharton said.

The mayor reassured the public that safety has not been compromised due to what is being called the "Blue Flu."

"We intend to do whatever is necessary to keep it that way," Wharton said.