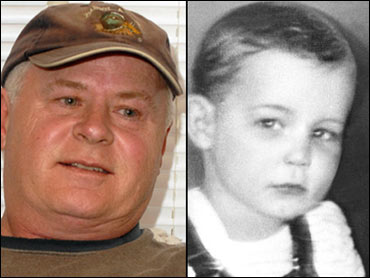 A Michigan man said Wednesday that pictures he found online led him to believe he could be the 2-year-old boy who vanished more than a half-century ago from a stroller outside a bakery on New York's Long Island.

John Robert Barnes told The Associated Press that he was doing online research within the past year to try to figure out who he really was, saying that from childhood he never felt as though he fit in with the family that raised him.

Barnes, who is in his 50s, saw pictures of the missing boy's mother when she was a young adult, thought the woman resembled himself at the same age and started to believe he might be Stephen Damman, who disappeared in 1955.

"I don't know if I'm related to the Dammans or the Barneses. I'm just waiting for the DNA results," Barnes said during an interview at his trailer home, located on a dirt road in Kalkaska, about 195 miles northwest of Detroit.

Police in New York's Nassau County have said a Michigan resident contacted their office in the past few months, saying he believes he is the missing toddler. The case was referred to the FBI. Barnes said the FBI took a sample of his DNA via a cheek swab and he's now "waiting for the FBI to tell me who I'm related to."

Stephen Damman's mother, Marilyn, left the boy and 7-month-old daughter, Pamela, waiting outside a bakery while she went inside to shop on Oct. 31, 1955, according to police and news accounts at the time. After 10 minutes, Marilyn came out of the bakery but could not find the stroller or her children, authorities said. The stroller, with only her daughter inside, was found around the corner from the market a short time later, authorities said.

The description of the child that vanished said the boy had blond hair, blue eyes and a fair complexion. It also said the boy walked with his toes turned out, and that he had a small scar underneath his chin. Barnes has a faint line, less than an inch, that runs below his chin and slightly up the right side of his face.

Investigators learned that the Michigan man who approached New York authorities also reached out to the woman he believes may be his sister, said Nassau County Police Lt. Kevin Smith, and the two conducted a private DNA test in March that found they could be related. Barnes said he did reach out to a sister in Kansas City, Mo., and that the two have become close.

Sandra Berchtold, a spokeswoman for the FBI in Detroit, declined to comment the case Wednesday.

The father of the woman and the missing boy, Jerry Damman of Newton, Iowa, has said he's hopeful the man is his son. Damann divorced the boy's mother a few years after the kidnapping and now lives on a farm with his wife, Charlotte.

"After all those years, you kind of lost all hope," Damann said Tuesday.

Barnes said he traveled to Iowa last year to see the man he believed was his biological father, but they never spoke. Damman's wife said that a man came to her door last fall and asked for Damann, and she gave him directions to another farm where he was working, but the two didn't connect.

Barnes said he doubts he will establish ties with the family if the DNA test indicates he is the missing child, although he'd like to meet Jerry Damman.

"I'm really glad that I'm finally finding all of this out, finding out who I'm related to. Because I didn't want to get old and die and not know. I was convinced that I was not one of the Barnes.