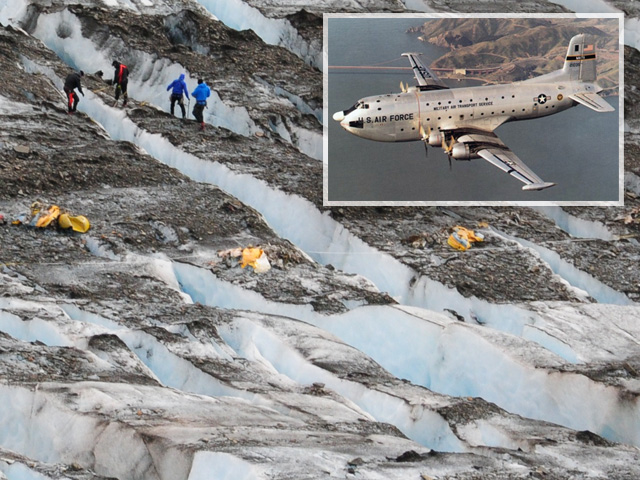 (AP) ANCHORAGE, Alaska - The wreckage of a military plane found this month on an Alaska glacier is that of an Air Force plane that crashed in 1952, killing all 52 people aboard, military officials said Wednesday.

Army Capt. Jamie Dobson said evidence found at the crash site correlates with the missing C-124A Globemaster, but the military is not eliminating other possibilities because much investigation still needs to be done.

Processing DNA samples from relatives of those on board the plane could take up to six years, Dobson said.

"We're still at the very beginning of this investigation," she said. "This is very close to the starting line, not the finish line."

The Alaska National Guard discovered the wreckage and possibly bones June 10 on Colony Glacier, about 40 miles east of Anchorage. The wreckage was spotted soon after the heavy transport plane vanished Nov. 22, 1952, with 41 passengers and 11 crew members, but it became buried in snow and likely churned beneath the surface of the glacier for decades, Dobson said.

The plane went down on a flight from McChord Air Force Base in Washington state.

An Associated Press report on Nov. 24, 1952, said the Globemaster was the third big Air Force transport plane to crash or vanish in Alaska that month and the sixth around the Pacific Rim.

Soon after the crash, a 12-member military team tried three times to make it to the site, but was thwarted by bad weather, said Tonja Anderson, whose grandfather Isaac Anderson was among those on board the doomed flight. The 41-year-old Tampa, Fla., woman has researched the crash for 12 years since her grandmother, now deceased, gave her details of the airman who died at age 21, leaving behind a young widow and 1 ½-year-old son.

"I'm overwhelmed," Anderson said Wednesday about the positive identification. It's something she has tried to long get from the military, she said, only to be told that recovering the remains from the plane's hidden grave was unfeasible and would be too expensive.

"If they can bring me one bone of my grandfather or his dog tag, that would be closure for me," she said.

According to an AP account, the civil air patrol member was Terris Moore, who was president of the University of Alaska. After returning from the site, he told reporters that the plane "obviously was flying at full speed" when it hit Mount Gannett, sliding down the snow-covered cliffs, exploding and disintegrating over two or three acres.

Only the tail and flippers of the craft were intact, but the tail numbers were enough for an identification. Moore said blood was found on a piece of blanket and there was a "sickly-sweet smell of death."

The debris was discovered June 14 while Alaska National Guardsmen were flying a Blackhawk helicopter during a training mission near the glacier. The guardsmen flew over the area several times.

Federal aviation officials implemented temporary flight restrictions over the area while the military investigation was conducted.

The team recovered materials like a life-support system from the wreckage and possible bones from the glacier. The evidence was being taken to the command's lab in Hawaii for analysis.