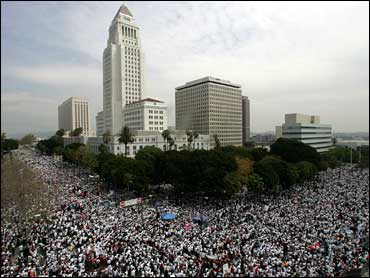 Hundred of thousands of people converged in cities around the nation for pro-immigrant rallies as the U.S. Senate prepares to debate legislation increasing penalties for undocumented aliens and the people who hire them.

Police tell CBS News.com that about

500,000 people were rallying the streets of downtown Los Angeles
on Saturday at 11:30 a.m. – the height of the demonstration. By early afternoon, the crowds began to thin out. At 2 p.m., 200,000 people remained, according to the police.

The Los Angeles Police Department says the march was peaceful, and there were no reports of arrests.

The protestors massed on the steps of City Hall, perched in trees and atop bus kiosks. Many of the marchers wore white shirts and waved U.S. flags. Some also carried the flags of Mexico and other countries, or wore them as capes.

The rally in Los Angeles is one of many large pro-immigration rallies taking place Saturday in cities across the nation. In Denver, an estimated

50,000 people
crowded Civic Center Park, near the state capitol.Denver police spokesman Sonny Jackson says only a few thousand people were expected at the protest, but officers reported no problems and the four-hour rally ended without incident.

Speakers during the rally ridiculed the Republican party, telling participants that "they're not on our side and they're pitting Americans against us."

The House of Representatives passed legislation in December that would make it a felony to be in the U.S. illegally, impose new penalties on employers who hire illegal immigrants and erect fences along one-third of the U.S.-Mexican border. The Senate is to begin debating the proposals on Tuesday.

President Bush, bracing for protests and a Senate showdown, called Saturday for legislation that does not force America to choose between being a welcoming society and a lawful one.

"America is a nation of immigrants, and we're also a nation of laws," Mr. Bush said in his weekly radio address about the emotional immigration issue that has driven a wedge in his party.

"As we debate the immigration issue, we must remember there are hardworking individuals, doing jobs that Americans will not do, who are contributing to the economic vitality of our country," Mr. Bush said.

The president's message was echoed in Denver, where one Colorado farmer told CBS affiliate KCNC-TV, "Let them come here legal, quit chasing them."

"Let them be comfortable here while they're working and doing our work that nobody else will do," he said of immigrant workers.

Smaller demonstrations took place across the nation on Friday. The rallies are expected to culminate in a "National Day of Action" April 10 organized by labor, immigration, civil rights and religious groups.

In Los Angeles, more than 2,700 students from at least eight Los Angeles high schools and middle schools poured out of classrooms in protest and visited other campuses, imploring students to join them.

In Phoenix, police said 20,000 demonstrators marched on Friday to the office of Republican Sen. Jon Kyl, co-sponsor of a bill that would give illegal immigrants up to five years to leave the country. The turnout clogged major thoroughfares in what officials said was one of the largest protests in the city's history.

Kyl pointed out that most were speaking out against the House bill making it a felony to be an illegal immigrant, not his bill, which would also step up border enforcement and create a temporary guest-worker program.

"They should be pleased that the Senate is probably going to address this in a much more comprehensive way," he told the Tucson Citizen newspaper during a meeting with its editorial board.

The House last December passed legislation, billed as a border protection, anti-terrorism and illegal immigration control act, includes such measures as enlisting military and local law enforcement help in stopping illegal entrants and requiring employers to verify the legal status of their workers. It authorizes the building of a fence along parts of the U.S.-Mexico border.

The vote was 239-182, with opposition coming from Democrats and some Republicans upset by the exclusion of the guest worker issue and other Republicans wanting tougher border control measures.

The bill also makes unlawful presence in the United States, currently a civil offense, a felony. An amendment to reduce the crime from a felony to a misdemeanor was defeated, with many Democrats voting against the proposal in protest over subjecting people who have overstayed their visas to any criminal charges.

The House also voted 273-148 to end the diversity visa lottery program that's open to countries that send few immigrants to the United States. Opponents said it was susceptible to fraud and could be a way for terrorists to enter the country.

The hottest debate in the Senate will be whether to pass some version of a guest worker program proposed by Sens. John McCain, R-Ariz., and Edward Kennedy, D-Mass. The bill by McCain, a contender for the 2008 GOP presidential nomination, and Kennedy would provide up to 400,000 visas in the first year and allow participants, after six years, to seek permanent residency.

Their proposal, strongly backed by the business community, would supplement existing temporary worker programs, such as the H-2A program that brings about 45,000 agriculture workers into the country every year, and H-1B visas issued to up to 65,000 high-tech and other skilled foreign workers.

It also would build on a near-century old tradition of turning to foreign unskilled laborers, mainly from Mexico, in response to labor shortages, often during times of war.

At least 500 students at Huntington Park High School near Los Angeles walked out of classes in the morning. Hundreds of the students, some carrying Mexican or U.S. flags, walked down the middle of Los Angeles streets, police cruisers behind them.

In Northern California, about 300 students at Ceres High School near Modesto protested before school. Administrators allowed the demonstration for two class periods.

"We felt it was valuable for them to experience democracy in action," said Ceres Unified School District Superintendent Walt Hanline. "People need to understand this legislation is creating a lot of fear for people."

In Georgia, activists said tens of thousands of workers did not show up at their jobs Friday after calls for a work stoppage to protest a bill passed by the Georgia House on Thursday.

That bill, which has yet to gain Georgia Senate approval, would deny state services to adults living in the U.S. illegally and impose a 5 percent surcharge on wire transfers from illegal immigrants.