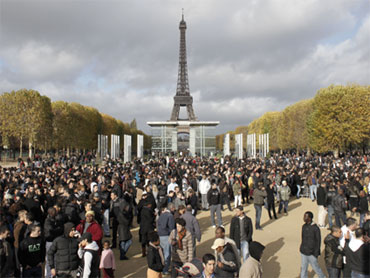 A large, unruly crowd has forced an Internet site to cancel a promotional stunt to hand out tens of thousands of euros in cash in Paris.

The French Internet company Mailorama.fr had planned to throw envelopes of cash to passers-by from a bus stop near the Eiffel Tower.

About 5,000 people gathered on the Champs de Mars Saturday to await the handout, blocking traffic and leading to security fears.

Police say officers and Mailorama decided jointly to call off the stunt.

Stephane Boukris, head of marketing for Mailorama, said, "We wanted to ensure the safety of our staff and this is why the event was cancelled. We weren't up to dealing with all of this."

The organizers had planned a dozen security guards from a private company. Metal barriers installed were crossed by the crowd.

Some in the crowd were apparently angry about the cancellation, overturning a car and throwing projectiles at police. Ten people were arrested.

"I was first. I spent all night outside!" one crowdmember told reporters.

But the bus (and its euros) was nowhere to be seen.