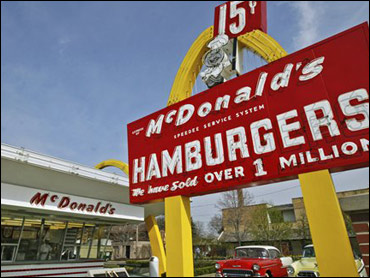 Open a newspaper and find stories about people suing McDonald's because its food supersized them, its coffee burned them and its fries were secretly cooked in beef-flavored oil.

Turn to the dictionary for a word that means low-paying, low-skill work and find "McJob" - a term that makes McDonald's a bit McAngry.

Walk into any business school across the country and chances are students are studying the company.

Watch TV and get bombarded with commercials that stick in your head so well that parents can still recite "Two all beef patties, special sauce, lettuce, cheese, pickles, onions on a sesame seed bun" years after the ad went off the air.

The Golden Arches are everywhere - and it started 50 years ago, when a milkshake machine salesman opened his first McDonald's in this Chicago suburb and began turning a small chain of hamburger stands into an empire that would include 30,000 restaurants, serve 50 million people a day, and become a symbol of the United States all over the world.

It is one of those few businesses that transcend selling products and services," said Edward Zajac, a professor at Northwestern University's Kellogg School of Management. "They are kind of a slice of the U.S., like Coca Cola."

It would be tough to overstate our fascination with McDonald's. For starters, it is what Americans think of as a uniquely American success story.

In the early 1950s, Ray Kroc traveled to San Bernardino, Calif., to find out why in the world Richard and Maurice "Mac" McDonald bought 10 milkshake mixing machines for their hamburger stand. He saw a revolutionary method of preparing food called the Speedee Service System and decided it could be replicated all over the country.

Kroc formed a partnership with the brothers before buying them out in 1961. And Kroc took the business to places that weren't so sunny and warm.

"Everybody thought they would never be able to do in Illinois what they did in California, that people wouldn't get out of their cars in January," said Philip Langdon, author of the book "Orange Roofs, Golden Arches" about chain restaurants.

They did. People flocked to Kroc's first McDonald's. With Kroc watching, and sometimes carrying a putty knife to scrape gum off the sidewalk, they lined up to order 15-cent burgers and 10-cent fries. Or simply stood outside watching the all-male staff - Kroc wanted his employees thinking only about burgers and fries - prepare food assembly-line style.

It was unlike anything anyone in town had ever seen. Bud Gundelach, now 62, recalls placing a colossal order for his high school classmates.

"I remember ordering over 100 hamburgers, 50, 60 orders of fries and got the whole order in about 10 minutes," he said. "They were going like crazy."

Kroc, who died in 1984, understood something else: Many people don't like surprises. He insisted his restaurants look the same, serve the same food and follow the same grill and fryer procedures, offering customers the same experience whether in Boston or Budapest.

"I know executives who go to Singapore and China and wherever ... and they end up eating at McDonald's," Zajac said. "The reason they do it is they want to know what they are going to get."

Another reason for McDonald's success: It was well-positioned for America's changing lifestyle. In the '50s, as more Americans were climbing into cars, McDonald's was there to satisfy the demands of a busier, more mobile country. Later, as more women went to work and mothers were increasingly hustling kids to after-school events, McDonald's told busy parents: "You Deserve a Break Today."

McDonald's also shrewdly recognized what people like to eat and how much of it they want.

"They connect with biology because most people like foods with high amounts of sugar and fat," said Kelly Brownell, a Yale University nutrition expert.

Sara Moulton, host of Sara's Secrets on the Food Network, executive chef of Gourmet magazine and food editor for "Good Morning America," said the folks at McDonald's "understand that Americans are totally into bigger is better."

It is a formula that still works, despite recent dips. After several years of stagnant U.S. sales and its first-ever quarterly loss in 2002, McDonald's has been surging for the past two years. Its profits jumped 55 percent in 2004 from the year before to $2.28 billion.

McDonald's refuses to take the blame for obesity and other health problems, saying those are the result of the choices people make. "It's all about personal responsibility," said spokeswoman Lisa Howard.

At the same time, McDonald's has been a leader in the fast-food industry in introducing healthier food such as salads and recently launched a campaign teaching children to eat well and get some exercise.

But as McDonald's continues to make such changes, it remains the face of the fast-food industry and the face of American values, American capitalism, and, some say, American culinary imperialism. The Golden Arches have become a target of protests and violence around the world, including the ransacking of a half-built restaurant in France and the deadly firebombing of a McDonald's in Indonesia.

"Our size works for us," said Irwin Kruger, who owns seven McDonald's restaurants in New York City, "and sometimes it works against us."