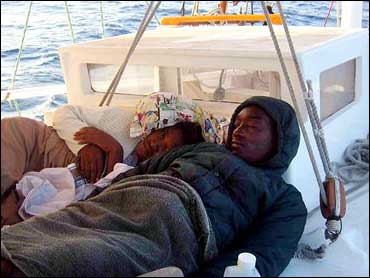 Two of the estimated 56 passengers were rescued Tuesday by an American couple sailing from Panama to Antigua.

The migrants were traveling from the northern Haitian town of Cap-Haitien to the Turks and Caicos Islands when a fuel tank exploded about 23 miles north of the Dominican Republic and sank the fiberglass boat, the survivors told their rescuers.

Authorities did not know when the blaze occurred or when the migrants set sail.

The Coast Guard mistakenly reported having found eight passengers dead on Thursday because a pilot counted some bodies twice, Bena said. Five bodies were found by a Liberian-flagged merchant marine ship on Thursday and will be returned to Haiti.

The search involved a U.S. Coast Guard cutter, airplanes and a helicopter.

The lone survivors were found Tuesday by Jan Hein, 53, and Bruce Smith, 52, an American couple who set sail months ago from Washington state aboard a sailboat Smith built himself.

"I spotted an odd shape in the water. I thought it was a buoy," Hein, an elementary school teacher from Gig Harbor, Washington, told The Associated Press.

Curiosity turned to horror as the couple piloted its 34-foot wooden sailboat closer and realized the shape was a man and a woman clinging to a stringy, charred piece of fiberglass.

"They were suffering," Hein said by phone from aboard their boat, the Woodwind, which was ported Friday in the Dominican town of Montecristi.

The man and woman — who wrote down their names as Djenson Lulien, 27, and Juli Cililu, 23 — were lifted into the boat. Hein and Smith washed the salt out of their burn wounds and tried to keep the pair warm after issuing a distress call.

The migrants told the couple they had spent days clinging to the wreckage after a gas tank exploded while refueling at night.

Thousands of Haitians take to the sea on flimsy boats each year, heading north toward Florida to escape grinding poverty and frequent political turmoil in the Western Hemisphere's poorest country. Nearly all are intercepted and repatriated to their homeland, where the vast majority of the nation's 8 million people lives on less than US$1 a day.