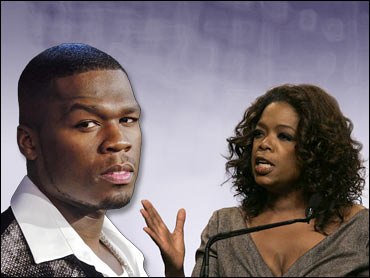 Rapper 50 Cent thinks Oprah Winfrey "started out with black women's views but has been catering to middle-aged women white American women for so long that she's become one herself," he says in the January issue of Elle magazine, excerpts of which were printed in the New York Post Thursday.

"I think the idea of being publicly noted that she's a billionaire makes (black women) interested in seeing her views. But it's even more exciting to the demographic of white American women she's been aiming at to see that she has the exact same views that they have," he says.

This isn't he first time the rapper has bashed the media mogul. In an interview with The Associated Press earlier this year, he complained that Winfrey rarely invites rappers on her talk show: "I think she caters to older white women."

"Oprah's audience is my audience's parents," the 29-year-old rapper said. "So, I could care less about Oprah or her show."

He's not alone in his resentment toward the talk show host.

Rapper Ludacris, aka Chris Bridges, said in the May issue of GQ magazine that Winfrey was "unfair" during a show he appeared on last October with co-stars from best-picture Oscar winner "Crash."

"She edited out a lot of my comments while keeping her own in," he said. "Of course, it's her show, but we were doing a show on racial discrimination, and she gave me a hard time as a rapper, when I came on there as an actor."

But, as 50 Cent said, Winfrey's purported disapproval might enhance a rap star's street cred. "I'm actually better off having friction with her," he said.

The crack-dealer-turned-rapper has sold millions of records gleefully flaunting his gangsta image, explicit lyrics and bulletproof vest (he was famously shot nine times). He has his own record label, G-Unit, the G-Unit clothing line, his own sneaker line with Reebok and a videogame, "Bulletproof."

And he wears his rough-and-tumble reputation proudly: "I don't mind it. I've actually accepted it."