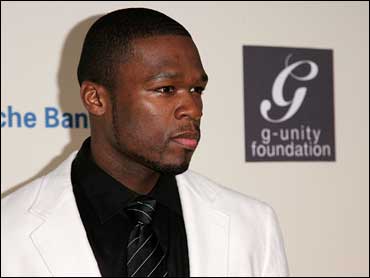 On his first two albums, 50 Cent was the main star with little room for supporting players. With the exception of appearances by the likes of friends like Eminem and Young Buck, most of the songs were pure 50.

On his upcoming album, though, he's more willing to share the mic.

"Curtis," due out in September, features a who's who of pop stars: Justin Timberlake, Timbaland, Akon and Mary J. Blige are among those who collaborate on the rapper's third CD.

50 Cent, speaking to The Associated Press before a performance Wednesday night at the Cipriani Wall Street concert series, said that previously he wanted to prove that he could stand on his own, without celebrity help.

"I can go there now. I feel like I've proven myself at this point. I just didn't want people to be able to interpret me making music with other people as if I needed to," he said. "So I just accomplished everything I needed to accomplish on my own and now its time for me to creatively merge with some of these people in order to create special songs."

"Curtis" was supposed to be released on Tuesday, but it was pushed back to Sept. 4. The delay, 50 Cent said, was because his record label, Interscope wasn't ready.

"I'm not disappointed, I'm just aware of the situation that I'm actually in and I have to be able to make those decisions for myself," he said.

The 50 Cent concert at Cipriani's was to benefit the charity of the Duchess of York, the Sarah Ferguson Foundation, which provides aid to families and children. 50 Cent said he was donating his six-figure performance fee to his own charity, G-Unity.

"My G-Unity foundation, I've already donated over $3 million. I don't really talk about that. It's not anything that I'm open about," he said. "I think if you're doing the right thing good things happen to you."