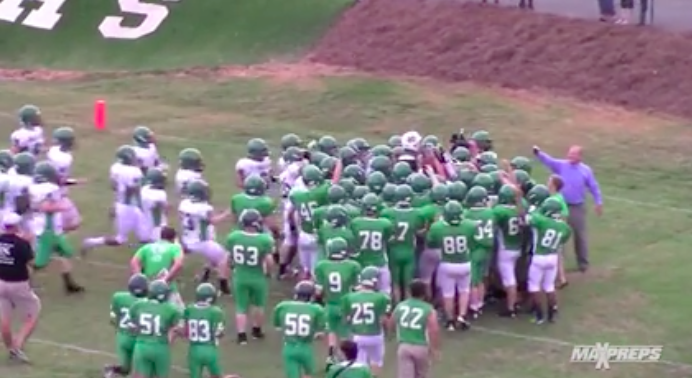 Last year, doctors told a 5-year-old boy who was diagnosed with an ultra-rare brain disorder that he'd never be able to play football.

It took just a little over a year to do it, but Ben Holloway proved them wrong.

With a little help from a local Georgia high school football team, the strong little boy ran across the football field, straight into the end zone during the first half of a scrimmage game.

And it was all caught on video.

"He fell down twice," his dad, Joshua Holloway, said. "But he got back up, grabbed the ball and scored into the end zone."

When he crossed the line, a group of Murray County High School football players huddled around him, chanting, "Ben! Ben! Ben!"

The video was shared on Facebook on Sunday night by more than 4,500 people and received hundreds of comments.

A GoFundMe account was also created for Ben to raise money to cover his growing medical bills.

A little over a year ago, Ben's mom noticed his left eye was bulging, so the family took him in for a checkup.

Within minutes, a doctor could tell something was wrong.

He eventually was diagnosed with a dural arteriovenous malformation, an abnormal tangle of blood vessels in his brain -- excess blood the size of a golfball.

Before Ben's first brain surgery, his family was told there was a "50-50 chance he'll have an immediate stroke and a 20 percent chance he won't make it off the operating table."

Fortunately, a specialist in New York agreed to do the surgery.

A month and two surgeries later, he was on the road to recovery. It didn't take long until he was back sitting on his dad lap watching football games until he fell asleep.

When he was surprised by the football team in May with his own jersey, shoulder pads, helmet and a signed game ball, he was "speechless."

"He was like a kid at Christmas time," Holloway said. "It was like Christmas morning for him -- it really was."

The week after the big game, Ben had another brain surgery.

He'll have a lot of doctor's visits in his future, but for now he's going to focus on starting kindergarten and standing on the sidelines with his extra small referee uniform on, watching his dad ref.

"We still watch the video every night," Holloway said.