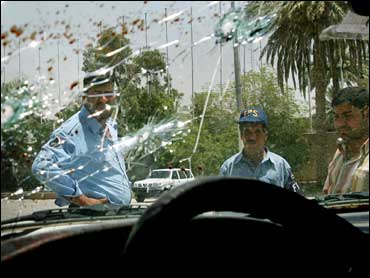 Iraqi police stormed a farm north of Baghdad early Thursday and freed at least 17 people who were snatched a day earlier in a mass kidnapping of about 85 workers and family members at the end of a factory shift.

The U.S. military Thursday reported four Marines and a soldier were killed in operations south and west of Baghdad, and an explosion of sectarian and revenge killings in Iraq's third largest city over the past three days claimed 19 lives.

The military said the four Marines were killed Tuesday in insurgency-ridden Anbar province, three of them in a roadside bombing and a fourth in a separate operation. A soldier died Wednesday south of the capital, the military said, giving no further details.

At least 2,512 members of the U.S. military have died since the beginning of the Iraq war in March 2003, according to an Associated Press count. The figure includes seven military civilians.

Nine days into a security crackdown in Baghdad, meanwhile, insurgent and sectarian bloodletting was muted, with no major violent incidents reported by midday.

The freed kidnap victims brought to nearly 50 the number of captives who have been either released by their captors or extricated by police. About 30 of the hostages, mainly women and children, were released shortly after they were taken captive. It is routine in Iraq for women to take their children to work.