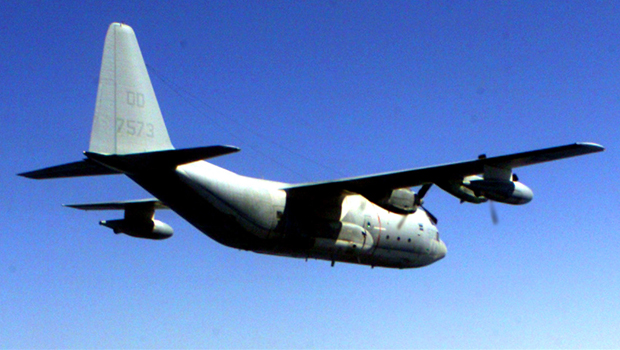 The search for the five, joined by Japanese and Australian forces, was halted Tuesday, and the cause of the crash is still under investigation, the Marines said in a statement.

The five crew members were on a KC-130 refueling aircraft that collided Thursday with an F/A-18 Hornet during regularly scheduled training. It wasn't clear whether the aircraft were practicing refueling when the mishap occurred, officials said.

The two crew members from the F/A-18 were recovered after the accident, but one died. The U.S. Marines said the survivor was in fair condition.

The military said in a statement that the next of kin of the five Marines have been notified and that their identities would be released within 24 hours of that notification.

The crew members of the refueling aircraft were based at Iwakuni air station near Hiroshima as part of the Marine Aerial Refueler Transport Squadron 152, whose call sign is Sumo.

"All of us in the Sumo family are extremely saddened following the announcement of the conclusion of search and rescue operation," the squadron's commanding officer, Lt. Col. Mitchell T. Maury, said in the statement. "We know this difficult decision was made after all resources were exhausted in the vigorous search for the Marines."

"Our thoughts are heavy and our prayers are with all family and friends of all five aircrew," Maury said.

A Litchfield Park, Arizona, woman told CBS Phoenix affiliate KPHO-TV her son was among the missing. Rosa Bennett said Maximo Flores, 27, had a heart of gold and a smile that could light up a room. "Oh, he was just very sweet. Always happy real smart and just a good guy," she remarked.

The Marines said the FA-18 pilot who lost his life was Capt. Jahmar F. Resilard, 28, of Miramar, Florida.

Lt. Col. James Compton called Resilard an "effective and dedicated leader who cared for his Marines and fellow pilots with passion." His decorations include the Navy and Marine Corps Achievement Medal, Global War on Terrorism Medal and National Defense Service Medal.