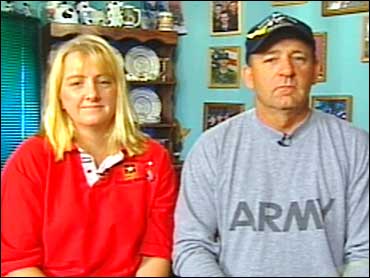 Mary and Ronald Harper have 10 children, and, though that is not a record, they may be the only couple with four children and a son-in-law serving in the Persian Gulf.

2nd Lt. Becky Gregg, 31, is a physician's assistant. Her husband Chet Gregg is a military lawyer. Spec. Sean Delaney, 23, is a crew chief on a Blackhawk helicopter. Pfc. Shawn Harper, 20, is a mechanic and 2nd Class Bobby Harper is a crew member on an artillery piece.

They are somewhere in the Persian Gulf serving in the 3rd Infantry Division out of Fort Stewart, Ga. Yet that does not mean that they are together, says Ronald Harper. "For the past couple of weeks, I don't think they have been able to see each other," he says.

Having them there is scary at a times says Mary Harper. "We know that they're very well trained, and we have confidence in them doing their job. The military has given them all the training they need. They are good soldiers, we have confidence they will do their job and get home."

The couple also has another son, Pvt. Christopher Delaney, a mechanic, serving in Hawaii.

Mary Harper says he was "very distraught in the beginning when he learned he wasn't going to Kuwait, because he feels like his duty is to be with his brothers and sisters over there, so it was hard for him in the beginning.

"We had a to do a lot of talking and telling him he was OK, and he was our lifesaver right now, our life line to sanity by being in Hawaii, and his brothers knew that's where he was going, they were like, 'You are crazy, if we could go to Hawaii, don't you think we would go?'"

As the war unfolds on television Ronald Harper says images can be unsettling for the family. "When we started bombing over there last Wednesday night and Thursday morning, when the marines attacked the coalition forces, we were able to see our youngest son and they filmed it on TV. And that was a scary situation, seeing your son go across into enemy territory. There was a chance of him getting blown out of the Paladin that he served in, and that was scary," he says.

To keep her worrying to a minimum Mary Harper has started "Operation Shoebox," collecting care packages and sending them to specific troops recommended by community members.