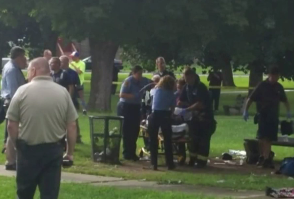 Around 4 p.m., a large storm cell moved through the area and lightning struck in Mansion Square Park in Poughkeepsie.

The victims were sitting on a bench under the tree when the severe weather hit, according to the Poughkeepsie Mayor's office.

Rolison said it appeared that the victims included four men and one woman.

Rolison reminded the public that sitting under trees during a storm with lightning can be dangerous. But he said the people who were struck may have had little time to react as they sat in the large park.

"There are park benches underneath these really big maple trees and other types of trees, and this was really a lightning generating type storm. We didn't have a lot of rain. There was a lot of lightning that moved through the area extremely quickly, not giving you a lot of time to move to a safer place," Rolison said.

Rolison said the lightning likely struck the side of a tree directly.

Chief meteorologist at CBS New York, Lonnie Quinn, emphasized that anyone outside in a thunderstorm should find the lowest place, and should never be under a tree.

"You want to find the lowest spot you can in an open field and lie down," he said. "Get rained on all you want, but that's where you want to go. That's where you're the safest."