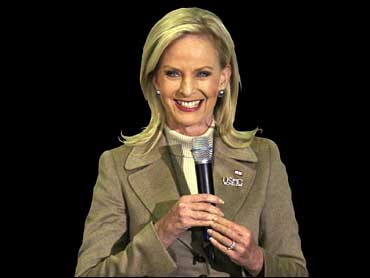 The presidential candidates and their families have been the constant focus of media attention, but we'd bet there are several things about John McCain's wife, Cindy, you don't know.

Cindy's been flying all across the country campaigning with her husband. But the Arizona native wasn't always a passenger on the plane -- at times, she was the pilot!

Cindy says she took him to the airport one day and told him what she'd been up to and wound up flying him during a Senate race.

According to Wallace, Cindy says her favorite hobby is racecar driving, "and I've actually seen her describe something called drift car driving with a butter knife, where the back of a car actually spins out almost ahead of the front of the car."

Another aspect of Cindy you might not be aware of -- she's a techno wizard. In fact, the whole campaign relies on the so-called "campaign I-T Guru," Wallace says.

"She juggles three blackberries and all of her children are always e-mailing and calling on the three devices," Wallace points out. "She can change anyone's settings. I was having a hard time reading my 'berry, so she grabbed it made the font larger in abut eight seconds, something I haven't been able to figure out in about four years!"

Along with her trio of tech toys, Cindy also loves her iPod. So what does a woman always on the move listen to?

Says Wallace, "On her iPod, she has downloaded programs like 'The Deadliest Catch,' 'Ice Road Truckers' and 'Mega Movers."

And finally, something else -- on tap -- about Cindy: "She can tell if beer is stale after one sip," Wallace notes. Cindy is, of course, heir to a beer fortune.