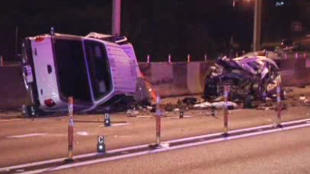 MIAMI - Five people were killed in a wrong-way crash on I-95 in northern Miami-Dade, the Florida Highway Patrol said.

CBS Miami reports that a woman in a pickup truck was driving south in the northbound lanes of I-95 when she side swiped one car and then slammed head on into a sedan in the express lanes near the Miami Gardens Drive exit.

A total of five vehicles, including a tow truck, were involved in the crash.

Two people were taken to nearby hospitals, no word on the extent of their injuries.

All northbound lanes of I-95 were closed for the accident investigation. Traffic was forced to exit the highway at Miami Gardens Drive.

The Florida Highway Patrol has not released the names of those who died.

This wasn't the only deadly accident Wednesday morning.

The State Road 826/Palmetto Expressway westbound exit ramp to NW 12th Avenue was shut down for a fatal rollover crash. Investigators have not said what led to this accident.