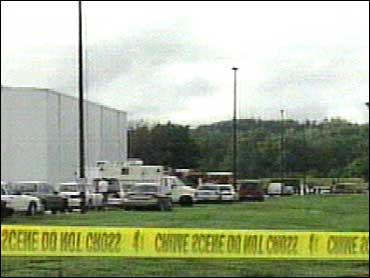 Deputy police chief Col. Sam Breshears said five people were killed in the shooting at the ConAgra Foods Inc. plant in Kansas City, Kan. Police earlier had given different totals of those killed, ranging from four to seven.

The three people wounded were being treated at The University of Kansas Hospital, spokesman Bob Hallinan said. Breshears said one was in critical condition.

CBS affiliate KCTV in Kansas City reports Breshears confirmed at the evening news conference, the shooter was "a disgruntled employee."

A police dispatcher who did not give her name said a ConAgra employee walked into the cafeteria and began firing, then killed himself. Breshears did not release such details of the shooting, not even the shooter's gender.

Breshears said when officers arrived the shooter was still moving through the building, but did not provide details about the circumstances under which the shooter committed suicide.

Many employees were kept at the plant for hours for interviews with police while friends and family gathered outside, waiting for word.

"Everybody out here is trying to find out if their loved one is a victim or a survivor," said Robert Thompson, whose wife was inside when the shooting took place.

Family members later were taken to a community center several blocks away.

Police spokeswoman Mary Solem said the employees were being kept in a safe location, and chaplains and victim advocates were there to "calm them down."

The ConAgra plant is located in an industrial section of the city, about four miles southwest of downtown Kansas City, Mo. Workers there process and slice meat for deli and sandwich products, company spokesman Bob McKeon said.

ConAgra is working with police in the investigation, but had no other details, McKeon said in a telephone interview from Omaha, Neb., where the company is headquartered.

"Our heartfelt sympathies go out to the families of the employees who have been involved in this tragedy," McKeon said.

The shooting came a year and a day after an employee of a manufacturing plant in Jefferson City, Mo., shot eight people, three fatally, before killing himself in front of the city's police headquarters.