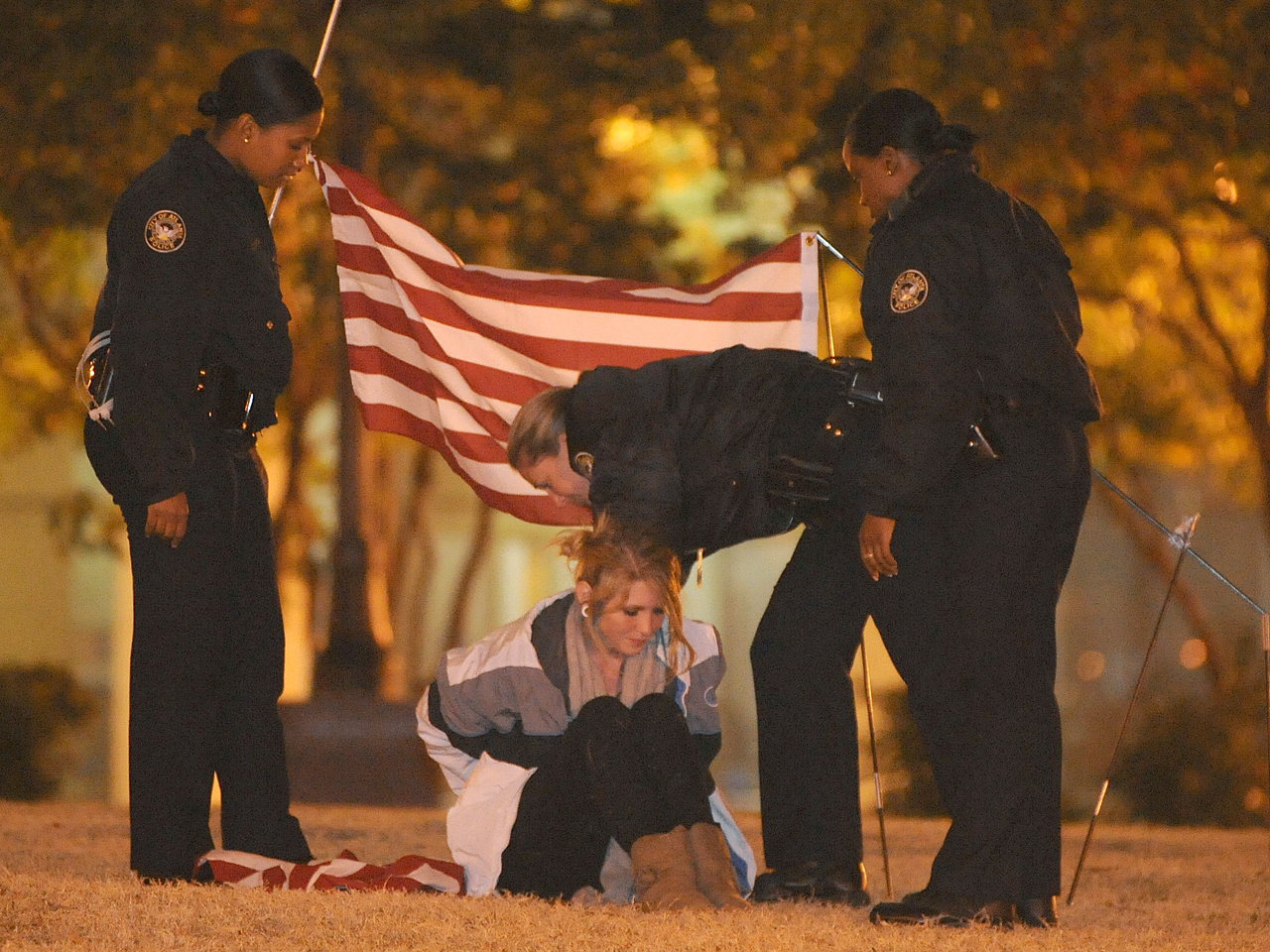 ATLANTA - Five people were arrested early Monday at or near a downtown Atlanta park that has been an off-and-on site of Wall Street protests similar to the ones being held in other U.S. cities, a day after 19 demonstrators were taken to jail by officers in riot gear when a rally spilled into the streets.

Atlanta police said one protester draped in an American flag inside Woodruff Park was arrested after refusing to leave by a Sunday night curfew, and four other people on bicycles were arrested near the park — three for traffic violations and one for obstruction of a law enforcement officer.

The 23-year-old woman in the park was warned three times in English and Spanish to leave before she was arrested, police spokesman Carlos Campos said. At the time, dozens more demonstrators chanting slogans like "We're hungry! We're poor! What are you wasting our money for?" stood behind barricades surrounding the park, where police had warned they would enforce an 11 p.m. curfew. Occupy Atlanta organizer Tim Franzen said having one person protesting was just as powerful as several.

The protest group held its general assembly meeting earlier in the evening, then marched back to Woodruff Park. Campos said officers were watching and warned people to stay out of the park. Most complied.

Occupy Atlanta organizers earlier said they planned to again camp at the park, setting up yet another showdown with police and the mayor.

There have been other arrests at similar protests across the country in recent weeks, most for curfew violations. Some of the most intense confrontations between demonstrators and police have been in Oakland, Calif., where two Iraq War veterans have been hurt in separate clashes with officers.

In Atlanta, 19 people were arrested on charges they refused to leave the park after curfew or blocked city roads, police said. Franzen said most got out of jail Sunday, while one person charged with aggravated assault and obstruction likely won't be bailed out until sometime this week.

Before Saturday's 11 p.m. curfew, a crowd of several hundred protesters had set up tents at Woodruff Park, the scene of about 50 arrests of demonstrators last month.

As the deadline approached, protesters began decamping peacefully. Dozens of officers were on hand, herding protesters away from the park's entrances and installing barricades around it. A police helicopter flew overhead.

While most protesters left the park, a few people stayed behind. Many spilled onto Peachtree Street, blocking roads. An officer on a motorcycle, with its lights and siren turned on, drove into a crowd marching on the street.

Video of the incident appears to show two people pushing against the front of the motorcycle as the engine revs. A scuffle ensues when a third person intervenes, which leads to a sometimes tense confrontation between protesters and officers.

Police officers in riot gear and on horseback filled the street, warning protesters to stay on the sidewalk. The protesters shouted at the officers, chanting slogans such as, "Shame! Shame!" and "What about your pensions?" A small group yelled more insulting things like, "Put the pigs back in their sty, we the people occupy."

Protesters began camping out in Woodruff Park on Oct. 7. Reed initially issued an executive order allowing them to stay overnight, but later revoked it after he said there were increasing security concerns.

"Mayor Reed was clear earlier this week in his public statements that the City of Atlanta would arrest any persons who violated the law," Police Chief George Turner said. The statement added warnings were issued over a loudspeaker repeatedly in English and Spanish before the latest arrests.

Saturday's crowd swelled during the brisk evening, as the Rev. Jesse Jackson paid an early evening visit to show his support. He told those gathered that the movement was an extension of Martin Luther King Jr.'s Poor People's Campaign.

Hours later, though, Occupy Atlanta organizer Latron Price of Atlanta said he was disappointed that the situation grew confrontational.

Franzen said on Sunday that one protester manning the park is safer after what happened the night before.

Asked about the exchanges with police, the 37-year-old Price said, "That has me equally upset because we're losing what we came here to do, which is to protest peacefully."

He said protesters need to regroup and focus on a nonviolent message.

"Today is a sad day for us. It's almost like we're seeing a little bit of what happened in Oakland here, not to the extent," she said. "Today was just a reminder of the system that we have, the corrupt system."