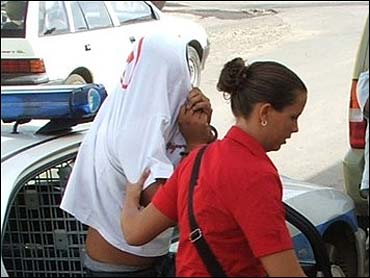 A disc jockey on a party boat who was the fourth person arrested in the mysterious disappearance of an Alabama teenager appeared before a judge Monday who was to decide whether there was sufficient cause to continue holding him.

Attorney General Caren Janssen would not comment on how the judge ruled after the half-hour hearing with the detainee, whom his employer has identified as 26-year-old Steve Gregory Croes.

Croes pulled the white T-shirt he was wearing up over his head to cover his face he was led into the court in handcuffs. He was later whisked away, still in cuffs, in a police car.

Croes was detained early Friday and prosecutors announced that he was "suspected of being involved in the disappearance" of 18-year-old Natalee Holloway, who vanished on the Dutch Caribbean island May 30 while celebrating her high school graduation with other students from Alabama.

CBS News Correspondent Kelly Cobiella reports that the co-owner of the boat, Marcus Wiggen, says Croes knows one of two Surinamese brothers from an internet café.

It was not clear what other connection Croes may have had to either the brothers, 21-year-old Deepak Kalpoe, and Satish Kalpoe, 18; or to a third young man in detention, 17-year-old son Joran van der Sloot, son of Aruban justice official Paul van der Sloot.

"I would never expect that he would be anywhere close to this investigation," Wiggen said.

Joran van der Sloot and the Kalpoes were among the last people reported to be with Holloway the night she disappeared. No one has been charged with a crime.

Van der Straaten said the father was asked to come back Sunday because officials were not able to finish the interrogation on Saturday, but declined to give more details.

"He was questioned as a witness, no more or no less," van der Straaten told The Associated Press.

"I think that he probably knows more than he's letting on," said Robin Holloway, the missing teen's stepmother, on CBS News' The Early Show.

But Paul van der Sloot was barred by a judge on Friday from seeing his son, the attorney general's office said.

"Prosecutors felt that allowing the father to see his son could be harmful to the investigation," attorney general spokeswoman Mariaine Croes said.

The Kalpoe brothers told police they took Holloway to a northern beach but dropped her off alone at her hotel, the Holiday Inn, where they claim she was approached by a security guard.

But a former hotel security guard detained and released in the case, Antonius "Mickey" John, has said he was told by Deepak Kalpoe during a chat in jail that the young men actually dropped both Natalee and Joran off together near the Marriott Hotel, about 10 blocks north of the Holiday Inn. John said he passed the information on to police.

On Saturday, a judge ordered the three young men to stay in jail for at least another week while the investigation continues.

Cobiella reports that they have been moved to a prison on the southern end of the island where they'll stay for at least another week.

Croes was arrested Friday after being contacted by police and giving a statement on Thursday night, said Marcus Wiggins, his boss on the party boat "Tattoo." The boat docks near the Holiday Inn.

Wiggins identified the man as Croes, who is not related to Mariaine Croes. Authorities had identified him only by his initials, S.G.C.

Under Dutch law, which Aruba follows as a Dutch protectorate, authorities can detain people for up to 116 days without charging them.

Holloway Twitty, 44, has insisted that Joran van der Sloot and the Kalpoes hold the key to the investigation and that authorities pressure the young men harder to tell the truth.

"It is 22 days now and it is a slow process," said Robin Holloway. "I know they're working around the clock on it, but it is frustrating"

"Every day without Natalee is very frustrating to not know where she is or to know what has happened or if she's elsewhere on the island," Allison added.

In Alabama, a Holloway family friend said Holloway's relatives identified and located Joran van der Sloot and the Kalpoe brothers less than a day after the teen vanished. But the three young men were not detained until 10 days later.

"It's just disappointing that they (authorities) weren't able to move faster," Jody Bearman, who organized the graduation trip, told AP.