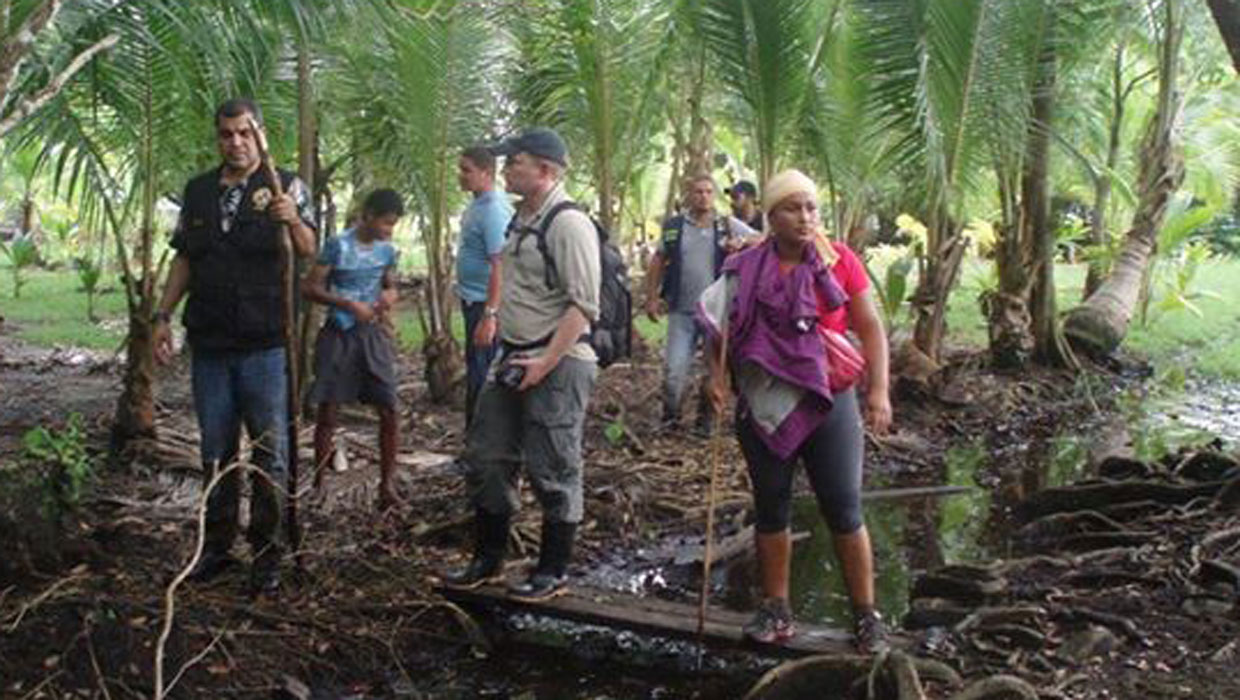 CARENERO, PANAMA -- April 25, 2012 was one of those days as a "48 Hours" producer that I'll never forget. After preparing for several months and then traveling thousands of miles to the remote island of Carenero off the Caribbean coast of Panama, we were about to search a swampy jungle for any clues into American Yvonne Baldelli's mysterious disappearance.

It really seemed like a surreal moment for everyone involved, from the FBI and State Department officials present, to the expats and locals who had volunteered to help in the search of the rough interior of the island.

As the search leaders explained how to mark evidence and instructed us to split up into groups and fan out through the mangroves and muck, local islanders used their machetes to fashion walking sticks for the volunteers. Everybody seemed to have a look on their face that said, "Are we really going in THERE?"

Costa Rican blood hounds had already done a preliminary search around the guesthouse where Yvonne was living with her boyfriend Brian Brimager and come up with no leads, so the next move in the investigation was to look in the no man's land of the interior.

The working theory in the investigation was that Brimager, who had just been proclaimed the main suspect by Panamanian authorities, allegedly killed Yvonne during a fight sometime during the early morning hours of November 27, 2011, and then disposed of her body somewhere at sea, or perhaps buried her on the island.

In order to rule out the small island, not much more than a mile long, it had to be searched. The bigger question was, could it ever really be truly searched?

With no roads and no cars, the perimeter of Carenero was the kind of tropical paradise millions of office workers think of whenever they hear a Jimmy Buffet song. There are bars on stilts out over the water, hammocks everywhere, great surfing and fishing, and the only way to really get around is by boat.

But the interior of the island was truly a tangle of footpaths, tidal swamps, and countless spiders, snakes and who knows what else. It was also a notorious place for local thieves to run off to after snatching a tourist's purse to get whatever money and valuables they could from the bag and toss everything else.

The island itself had quite a history. "Cayo Carenero" means "Careening Cay" in English, and it is said to have been named and discovered by Christopher Columbus, who, the story goes, stopped at the island and used the shallow waters to careen, or roll, his ships on their sides and clean their hulls.

But no one was thinking about Christopher Columbus as we began to head into the interior. For Yvonne's family, it was a haunting moment. Over the course of the five months since Yvonne had gone missing, the family had struggled to get United States and Panamanian officials to investigate her disappearance.

Now, they had finally succeeded and there were dozens of people searching, but at the same time, there was an anxiety about actually finding Yvonne's remains. Yvonne's stepmother Lillian Faust put it very well when she told Correspondent Peter Van Sant in a later interview, "We are in Central America in some jungle, in some swamp looking for Yvonne... I kept asking myself, 'I want to find Yvonne, but do I want to find Yvonne?' I mean, I wanna know where she is. But do I wanna see her in these swampy areas?"

While family members by that time had come to accept that they would never see Yvonne alive again, there was an eerie sense that she was somewhere on the island, and that she would somehow have the final word in all of this.

During my time with the search parties we found passports, medicine bottles, women's clothing, purses and someone even found a dismantled pistol.

If the search that day did turn up any useful evidence, the authorities have yet to announce it. But for everyone who looked for Yvonne that day, a truly chilling moment came more than a year later in late August of 2013.

That's when a local worker on the northern tip of Carenero was clearing brush for a planned eco-resort and he discovered a military-style duffel bag with human remains in it. More bones were found nearby in or around two garbage bags and some of those bones had been severed by a sharp blade, not unlike a machete Brian Brimager had given a friend to sell on Facebook.

Authorities have linked the bag to photos Brian and Yvonne took of themselves as they were arriving at the island. And Yvonne's remains are now key evidence in the case against Brian Brimager. She may very well have the last word in this after all. When I looked on a map where the gruesome discovery was made, I realized, it wasn't more than a few hundred yards away from where we had been looking for her on that rainy day in April 2012.

Yvonne's family's instinct had been right. She was on that island all along.