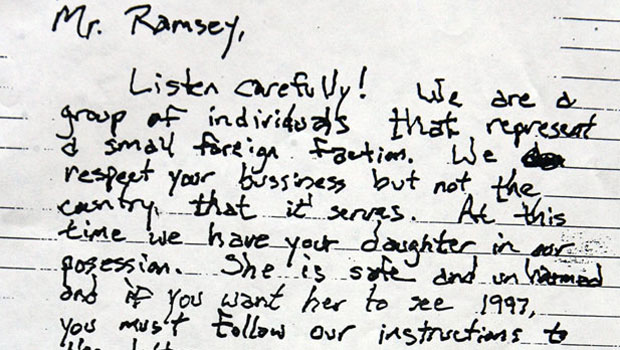 That's what Tom Wiles found when he began reading the email he'll never forget on April 3, 2008. There in his inbox was a ransom note from kidnappers who called themselves "Group X" and the message was frightening beyond belief - the group said it had taken Tom's only son, Robert, 26, and would return him when Tom paid a $750,000 ransom. What happened next is the subject of this week's "48 Hours Mystery: Ransom."

What Tom Wiles experienced is a rare event but when a ransom note is sent, it tends to stick in the public's consciousness. We all read the notes over and over trying to discern clues and intuitively try to guess who might have written it, even though we have no first-hand knowledge of the people involved.

That was certainly the case with the note left behind with the body of JonBenet Ramsey, the 6-year-old child found murdered in her parents' Boulder, Colorado, home back in 1996. The case was sensational - a beautiful child found murdered on Christmas Day, wealthy parents, a picture-perfect town and that mysterious ransom note.

The ransom note was a lie of course. Whoever signed the note - and it was signed S.B.T.C. - said that JonBenet was safe and sound when in fact she had already been murdered and her body was in the house's basement. And then there was that demand for $118,000, an odd figure that happened to be the amount of the bonus received that year by JonBenet's father, John.

Everyone thought the amount demanded meant something. The same type of thinking applied in the Wiles case. $750,000? Why not $1 million? That's because $750,000 was a significant amount and meant something to the Wiles family.

The handwriting on the Ramsey note was examined and discussed over and over by "experts" who claimed Patsy, JonBenet's mother, wrote it, therefore she was the killer. Both Patsy and John Ramsey lived under a cloud of suspicion for years but eventually they were cleared of having any involvement in their daughter's murder, a crime that remains unsolved.

But the Ramsey note is only one of written over the years. Here are some others:

There were other notes sent by famous criminals that stick in our mind, letters that "Son of Sam" serial killer David Berkowitz sent to New York Daily News columnist Jimmy Breslin, for instance. Or the cryptograms left by the Zodiac Killer in California; he's never been caught or identified. Hell, Unabomber Ted Kaczynski wrote such a long "manifesto" that his brother recognized it as Ted's writing.

But none of the ransom notes mentioned here or any of the most famous notes were written in the style favored by the movies. You know the kind of ransom note you're used to imagining - letters cut out of a magazine and pasted onto a piece of paper. As far as I can tell, that exists only in the imagination of Hollywood screenwriters.

Paul LaRosa is a CBS News producer and published author. For more info, go to www.paullarosa.com.