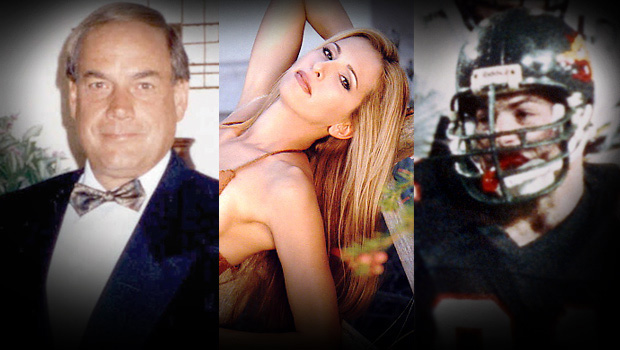 (CBS) New York -- Rarely is an episode of "CSI" resolved without DNA evidence, and most real-life cold cases are solved because of it. But when wealthy entrepreneur Bill McLaughlin was found shot to death in his waterfront home in Newport Beach, Calif., in 1994, there was no DNA, no murder weapon and no finger print or fiber evidence.

The case went cold until 2009 when Orange County Deputy District Attorney Matt Murphy put some real gumshoe detective work into play and the case broke wide open. After nearly 15 years, Murphy's lead investigator, Larry Montgomery -- who took on this very cold case -- was able to put the pieces of the puzzle together and arrest former NFL player Eric Naposki and Bill McLaughlin's fiancee, Nanette Johnston, for his murder. Naposki was also romantically involved with Johnston at the time. So how did investigators put together this case with no real forensic proof?

Montgomery spent two years reinvestigating the case. He hit pay dirt when he went back and combed through 60 tapes of police interviews with possible suspects and witnesses. "That's where you find the details," Montgomery said. He zeroed in on inconsistencies in the story Naposki and Johnston first told authorities during the original investigation. Montgomery then cross-referenced their statements with the accounts of other potential suspects and witnesses.

One of the most important red flags for investigators was Naposki's changing story about the guns he owned, specifically a 9mm Beretta, which is the same weapon used to kill McLaughlin. No information had yet been made public about the murder weapon, yet Naposki made various misleading statements about the gun. He told Newport Beach detectives he had owned a 9mm Beretta but had lost it months earlier. Yet other interviews revealed Naposki had been seen using his Beretta just two weeks before the murder. "If you put yourself in the position of an innocent person who doesn't know the information about what gun killed him, why would you ... lie about the gun that did, in fact, kill him?" Montgomery told "48 Hours" there were other areas that Naposki was deliberately misleading about. Specifically there were several versions of Naposki's alibi that night, and the nature of his relationship with Nanette Johnston. Naposki denied he was involved with Johnston when he first talked to investigators and that of course proved to be untrue.

Montgomery admitted Naposki sounded convincing in his steadfast denial of guilt. "Innocent people, when they're being accused of something that they're not guilty of, are very powerful with their statements of innocence. So when I first was looking at that, I'm thinking, 'boy, Mr. Naposki sounds innocent. In greater detail, when you look and see the lies that he's very powerful and positive about and then it turns out they're lies, you see he just has that ability. He's a good liar."

The devil was in the details and Montgomery's efforts paid off. In 2009, he traveled to Connecticut to arrest Eric Naposki for the murder of Bill McLaughlin. Montgomery was able to interrogate Naposki for the first time. Even then, he says, Naposki held fast to his lies.

Nanette Johnston was also arrested, but Naposki would stand trial first. Both were convicted of murder. Only now, after Naposki's conviction, has he admitted that he lied about some of the critical details of the case.

In three separate interviews with "48 Hours" correspondent Troy Roberts, Naposki claims he simply never trusted the authorities and is NOW telling the truth. He did not murder Bill McLaughlin. Naposki's sentencing was delayed, in fact, while prosecutors investigated his claims that someone else had killed McLaughlin.

The judge dismissed his claims. In the end, while it took more than a decade, prosecutors never gave up.