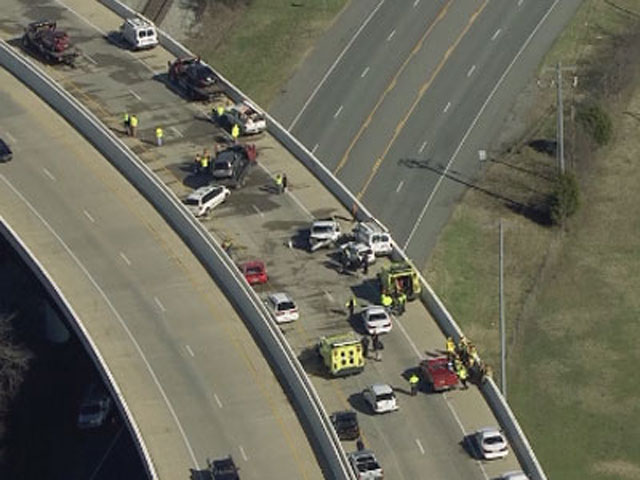 HENDERSONVILLE, Tenn. - One person died and at least 13 were injured in a chain-reaction crash that damaged 47 vehicles on a foggy highway near Nashville during the morning rush hour Thursday.

According to CBS affiliate WTVF in Nashville, Tenn., police said 174 cars were involved, but only 47 of them sustained damage.

The pileup began shortly before 7 a.m. on Vietnam Veterans Parkway in Hendersonville, northeast of Nashville. Dense fog had formed over the highway as the early temperature dropped to about 25 degrees.

Tom Johnstone, a forecaster with the National Weather Service office in Nashville, said there were reports in the area of freezing fog and heavy frost Thursday morning. "Thick cloud almost, you couldn't see probably five feet," one driver said to WTVF. The cause of the crash remains under investigation, according to Hendersonville Police.

As the fog lifted at midmorning, wrecked vehicles could be seen strewn along a couple of miles of the highway at a place where the road was raised on pillars.

Shawna Zodi, a spokeswoman for the Hendersonville Medical Center, said eight people had been brought to the hospital's emergency room. Zodi confirmed there was one death among those patients, but there were no immediate details about the victim. She said most of those brought in did not have critical injuries and said in talking with ambulance crews on the scene, most other injuries appeared to be relatively minor.

Officials added to WTVF that a school bus, a preschool bus and a tractor trailer were involved in the accindent. Sumner County school officials said no students on board the preschool bus, and no children on the school bus were injured.

All eastbound lanes of the parkway were closed.